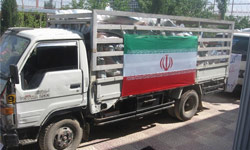 IRNA – Head of the Relief Aid and Rescue Organization Morteza Salimi says the 75-ton humanitarian aid consignment of the Islamic Republic of Iran Red Crescent Society (RCS) has been delivered to the government of Syria.

He added that five tons of medicine was also sent alongside the consignment.

The official noted that other consignments are also getting prepared to be dispatched to Syria after required coordination.

According to the report, on Wednesday and following the phone call of President Hassan Rouhani and Syrian President Bashar Assad the first consignment of aid of Iran was delivered to Syrian government on Thursday.