A Look at Iranian Newspaper Front Pages on December 15

Iran Front Page- Leader of the Islamic Revolution Ayatollah Seyyed Ali Khamenei had two separate meetings on Wednesday with the head of the Palestinian Islamic Jihad movement, Ramadan Abdullah Shalah, and the Indonesian President Joko Widodo. The remarks made by Ayatollah Khamenei in these two meetings were widely covered by all newspapers in Iran.

The majority of newspapers highlighted the Leader’s remarks about the liberation of the Holy Quds and the need for Muslim unity and fight against Israel.

Islamic Unity Conference, which was kicked off in Tehran on Thursday, was also a top story today.

President Hassan Rouhani’s orders in reaction to the US violation of JCPOA, as well as the liberation of Syria’s Aleppo, also remained hot stories on Thursday. 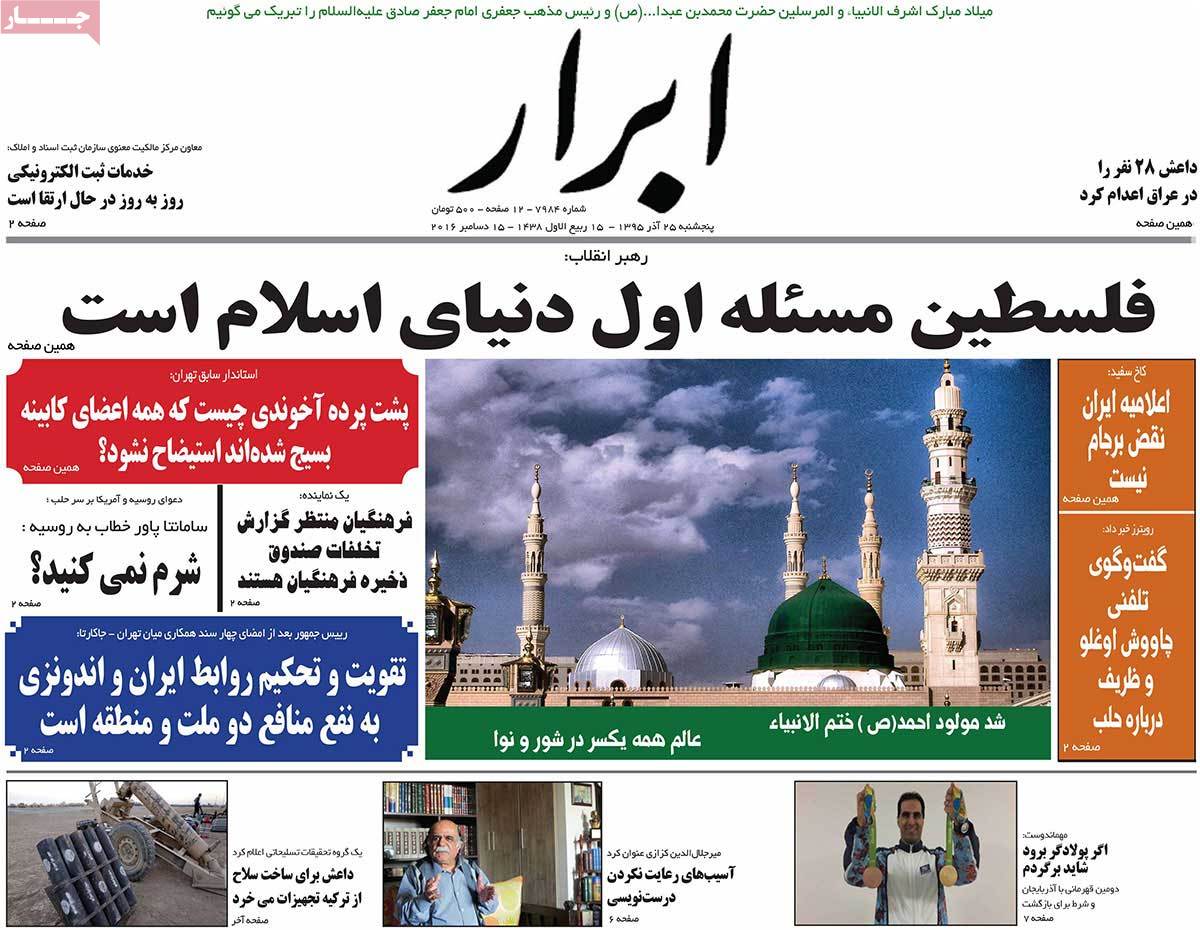 2- Ayatollah Makarem Shirazi: We Shouldn’t Be the First to Breach Nuclear Deal

3- US: Rouhani’s Order IS Not a Violation of Nuclear Deal 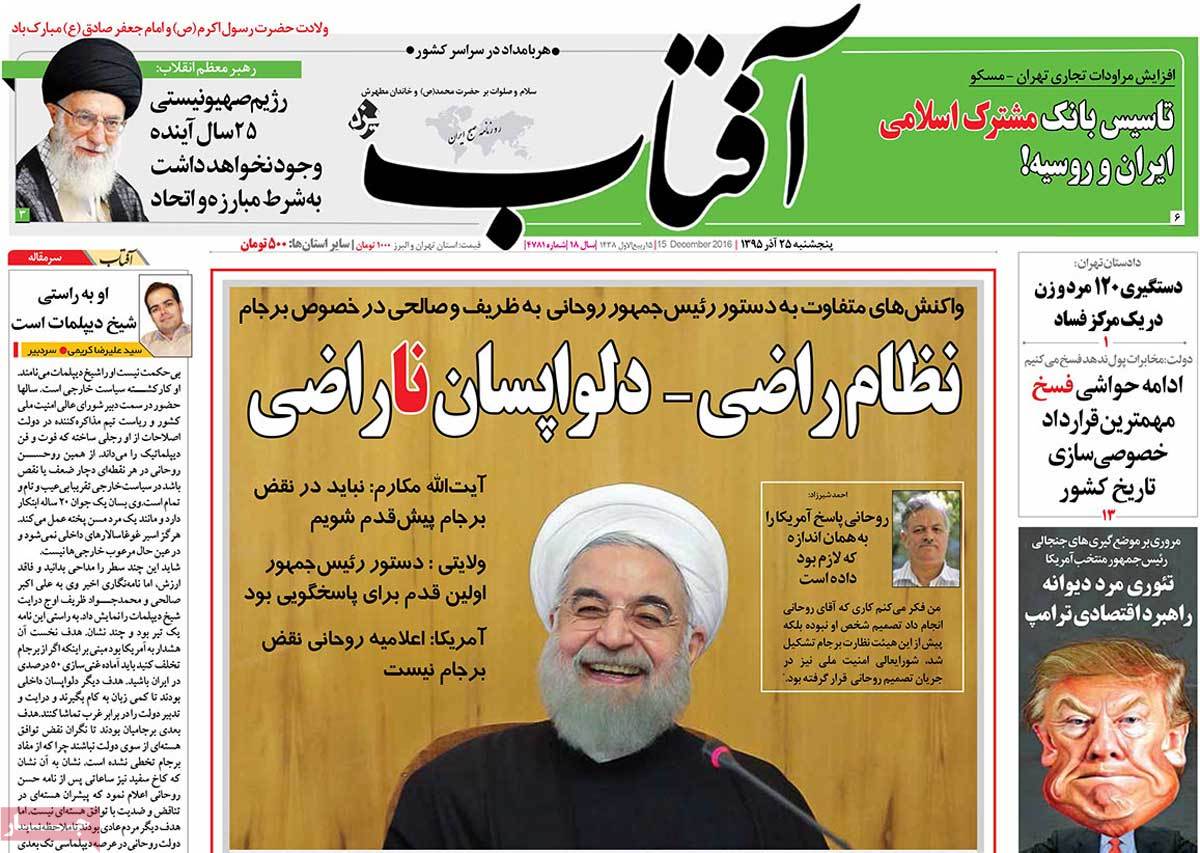 1- Iran’s Leader: Palestine Is Most Important Issue of Muslim World 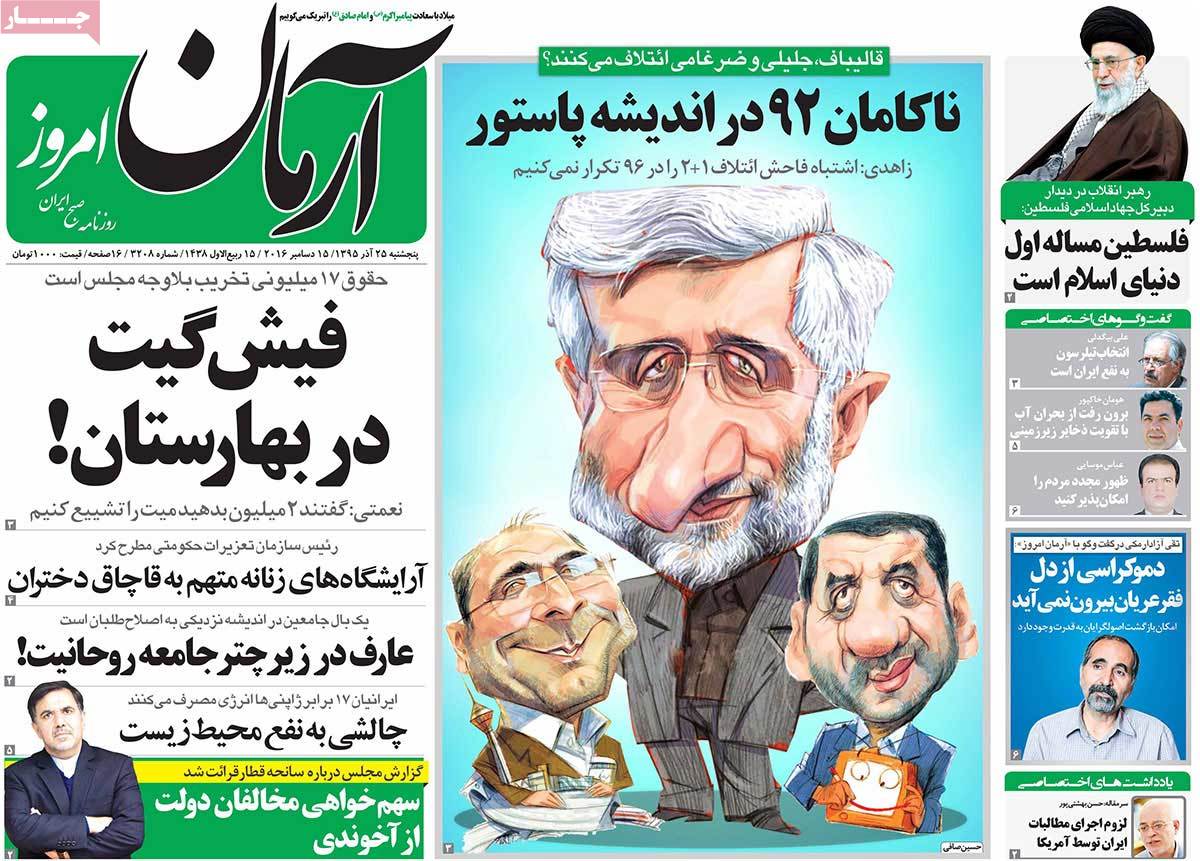 1- Kerry: Syrian Dissidents Should Submit to What Damascus Wants

2- Obama’s Administration Has No Plan to Overthrow Assad

4- Al Saud’s Impudence Does Not Deserve Our Response: Velayati 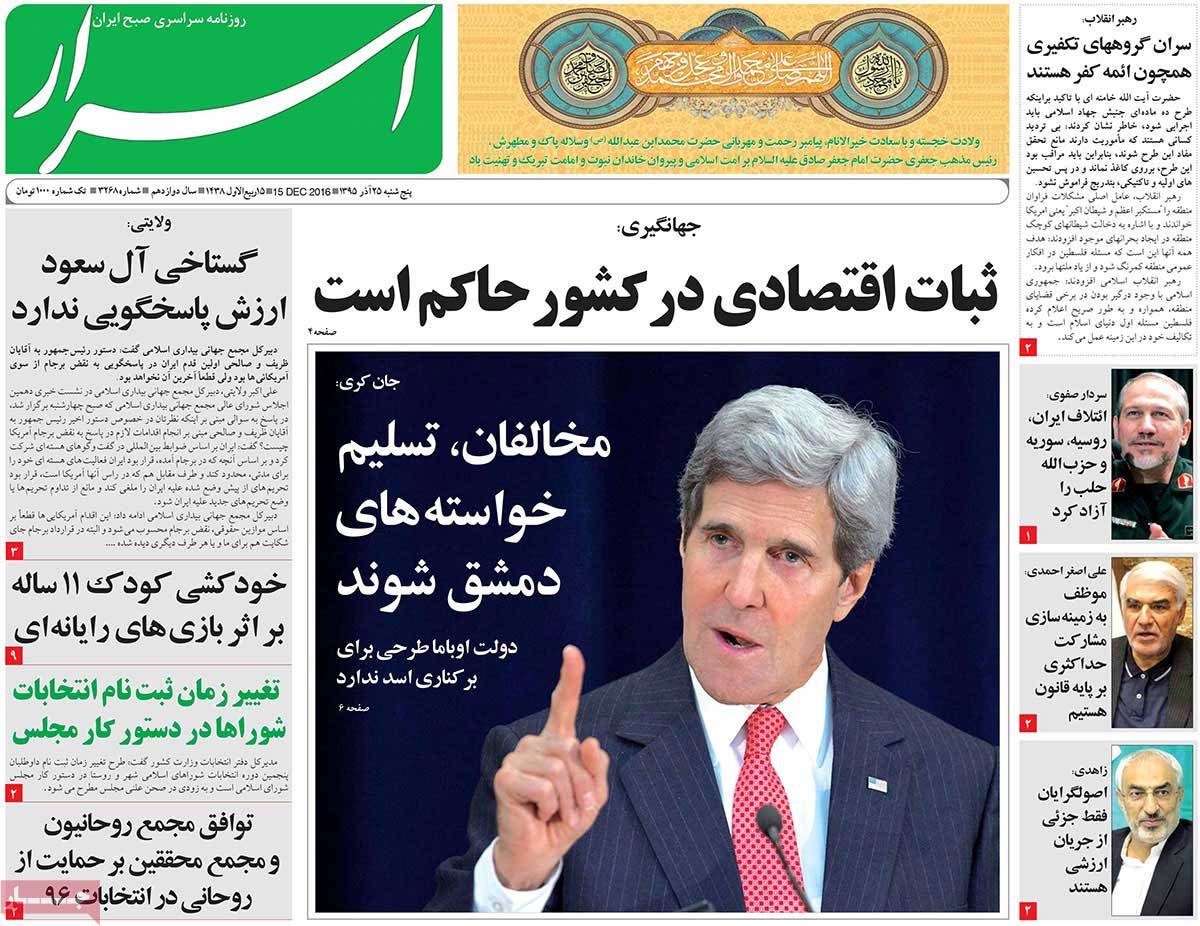 1- Zionist Regime Will Not Exist in 25 Years: Iran’s Leader

2- Results of Choosing Oil Economists: A Review of Possible Changes in US Foreign Policy 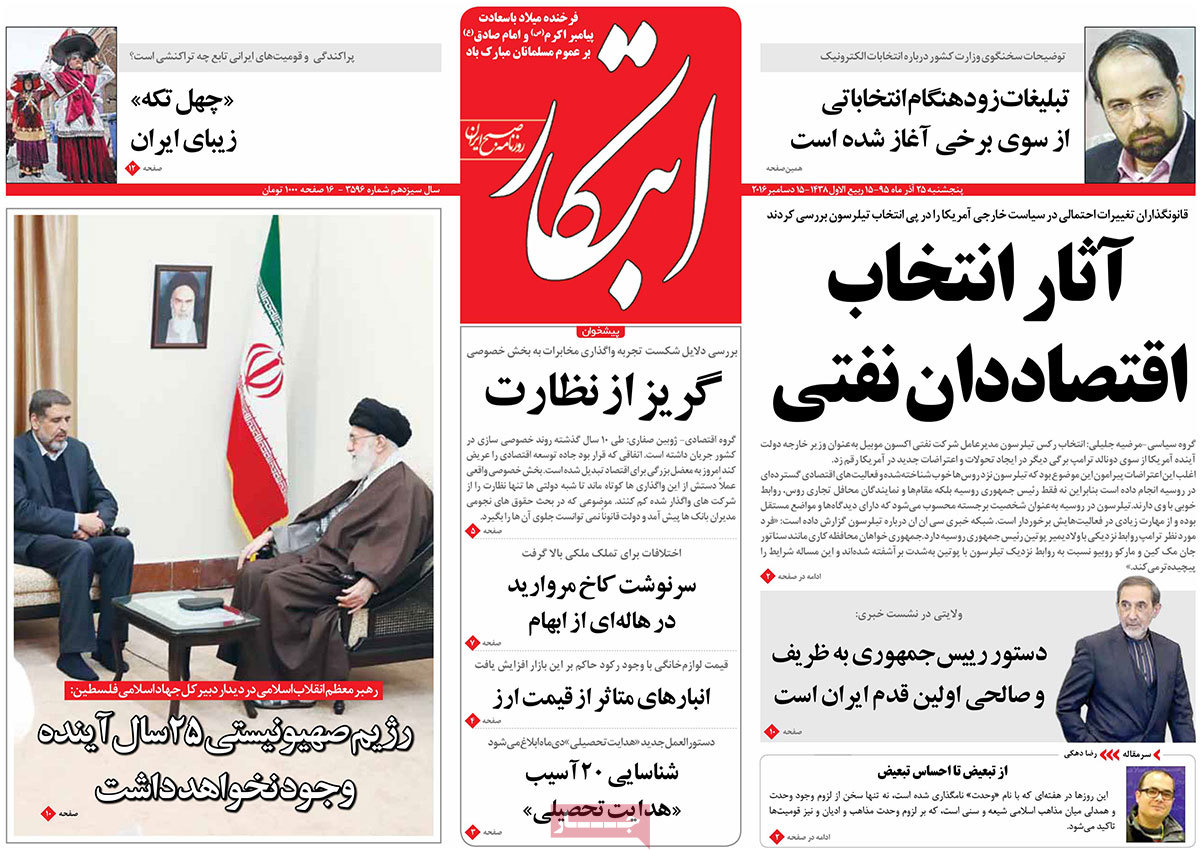 1- Iran, Russia, and Turkey Cooperate for Peace in Aleppo 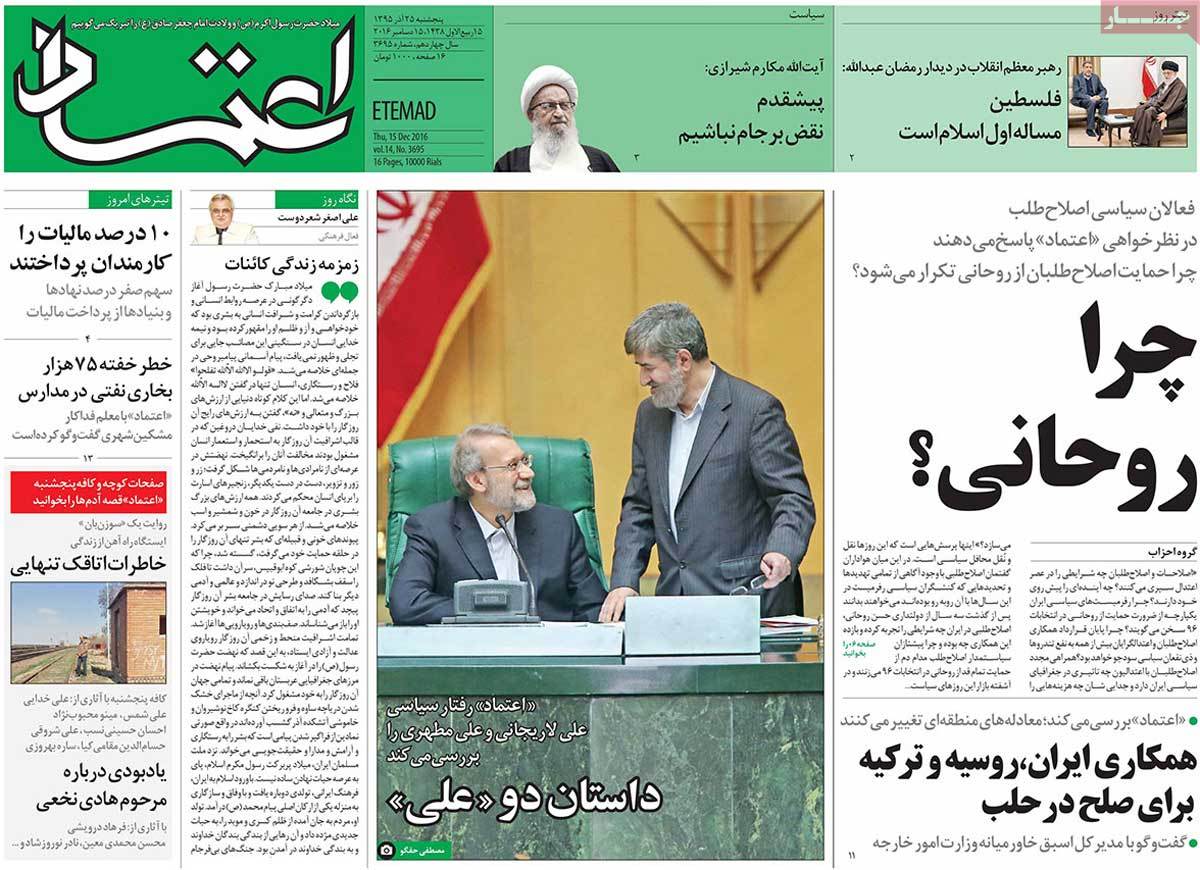 2- Islamic Countries Should Strengthen Each Other on Contrary to What Enemies Want: Leader 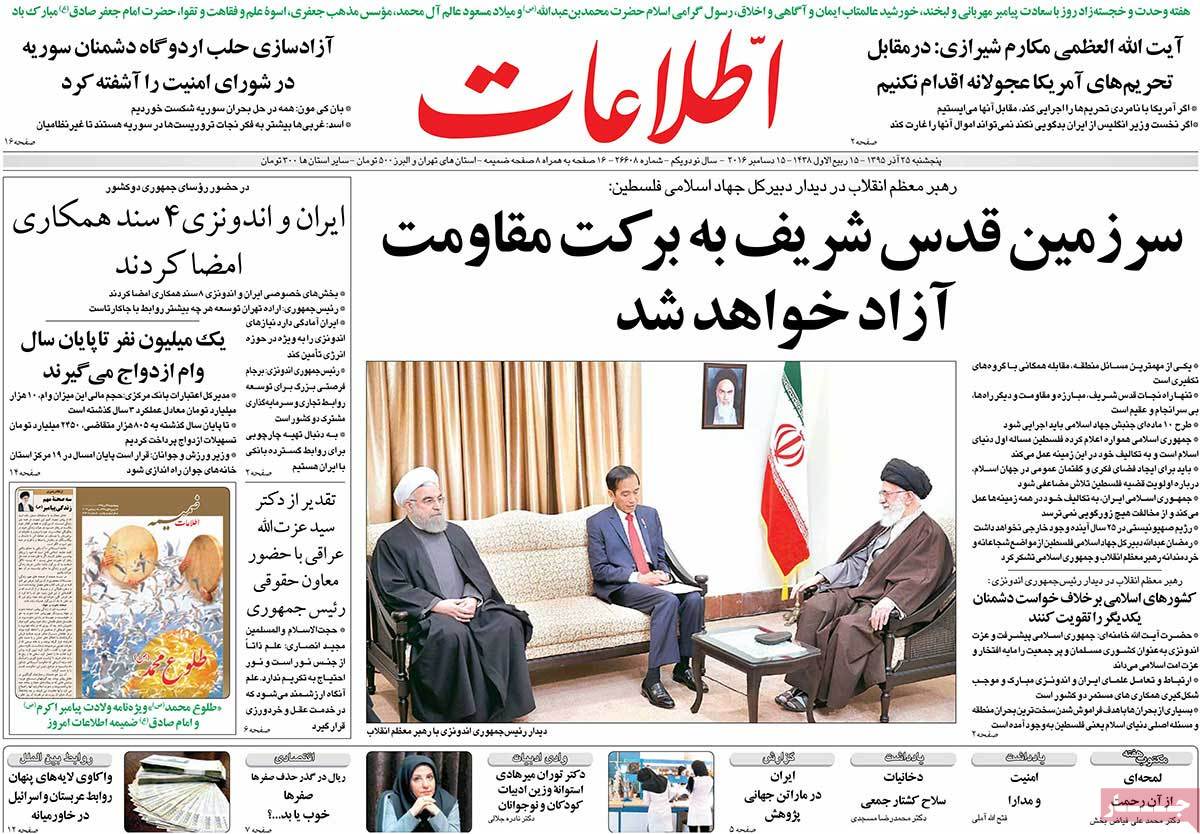 1- Reviving Culture and Art Is the Way to Save the Country: Culture Minister

2- Rouhani to Assad: Iran Will Stand by Syria until Expulsion of All Terrorists 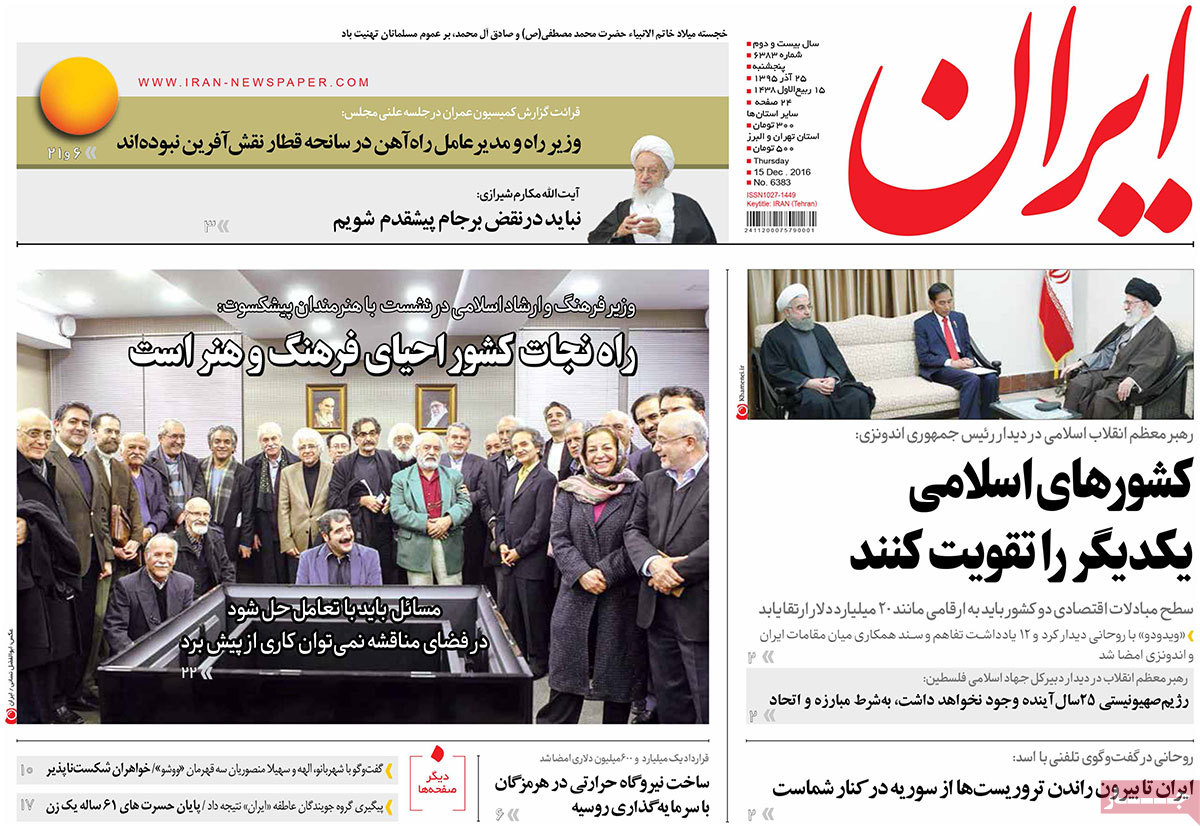 1- Iran’s Leader in Meeting with Indonesian President: Islamic Countries Should Strengthen Each Other

2- Call of Unity from Tehran: Islamic Unity Conference to Be Held in Tehran with the Aim of Countering Western-Arab Divisive Plots 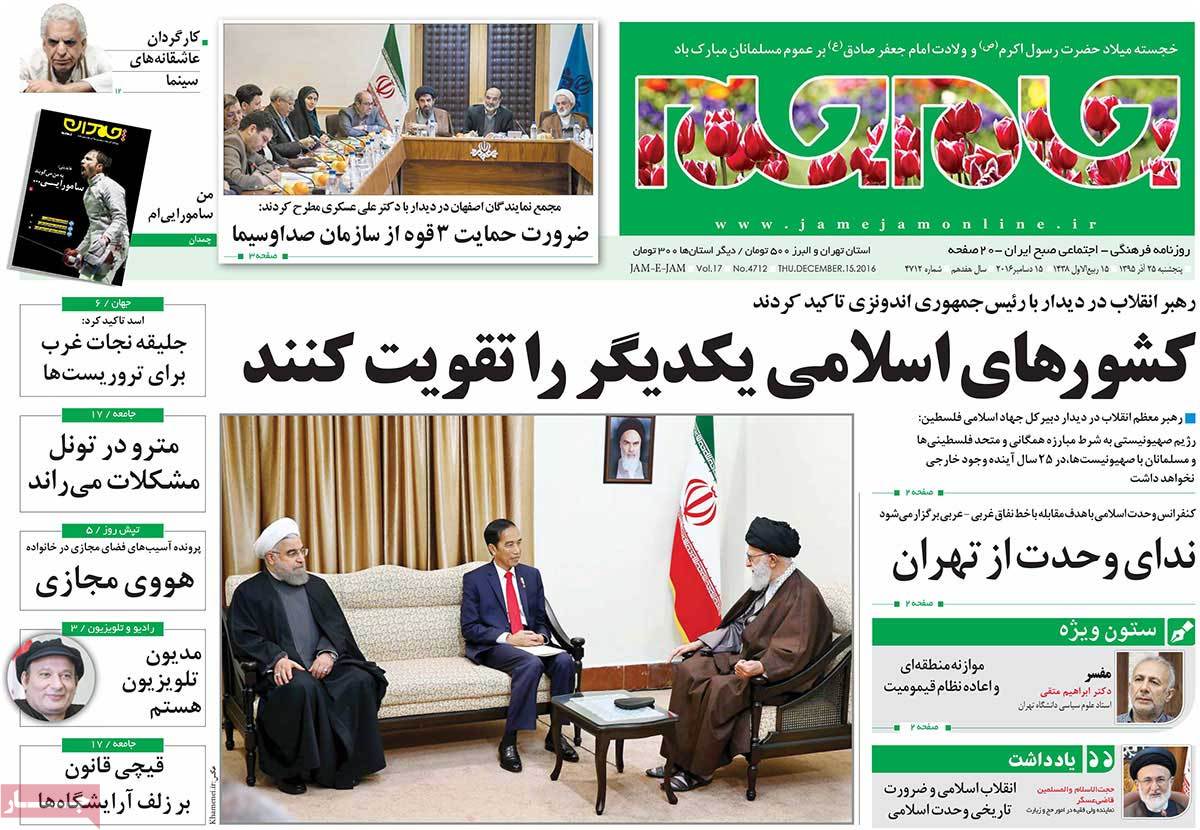 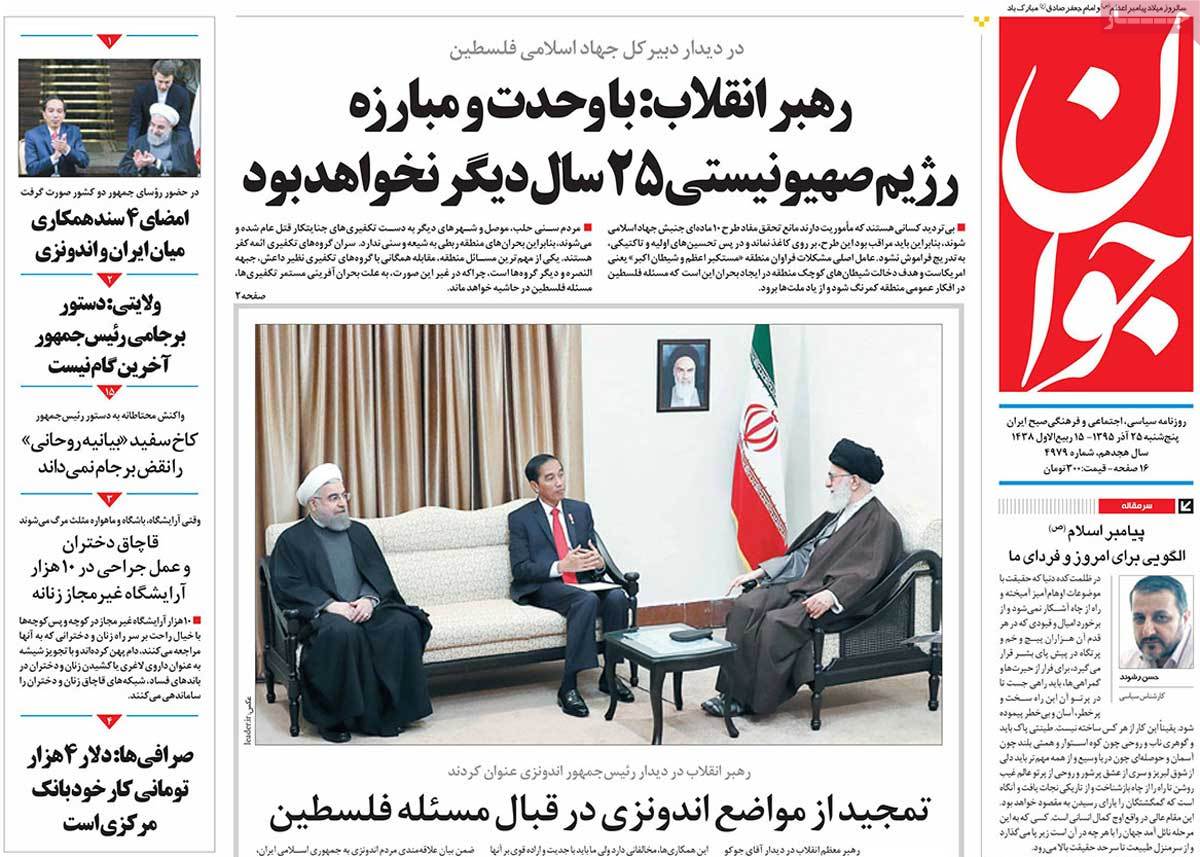 2- Indonesian President: Nuclear Deal Has Created Great Opportunities for Promotion of Trade Ties and Investment between Tehran and Jakarta 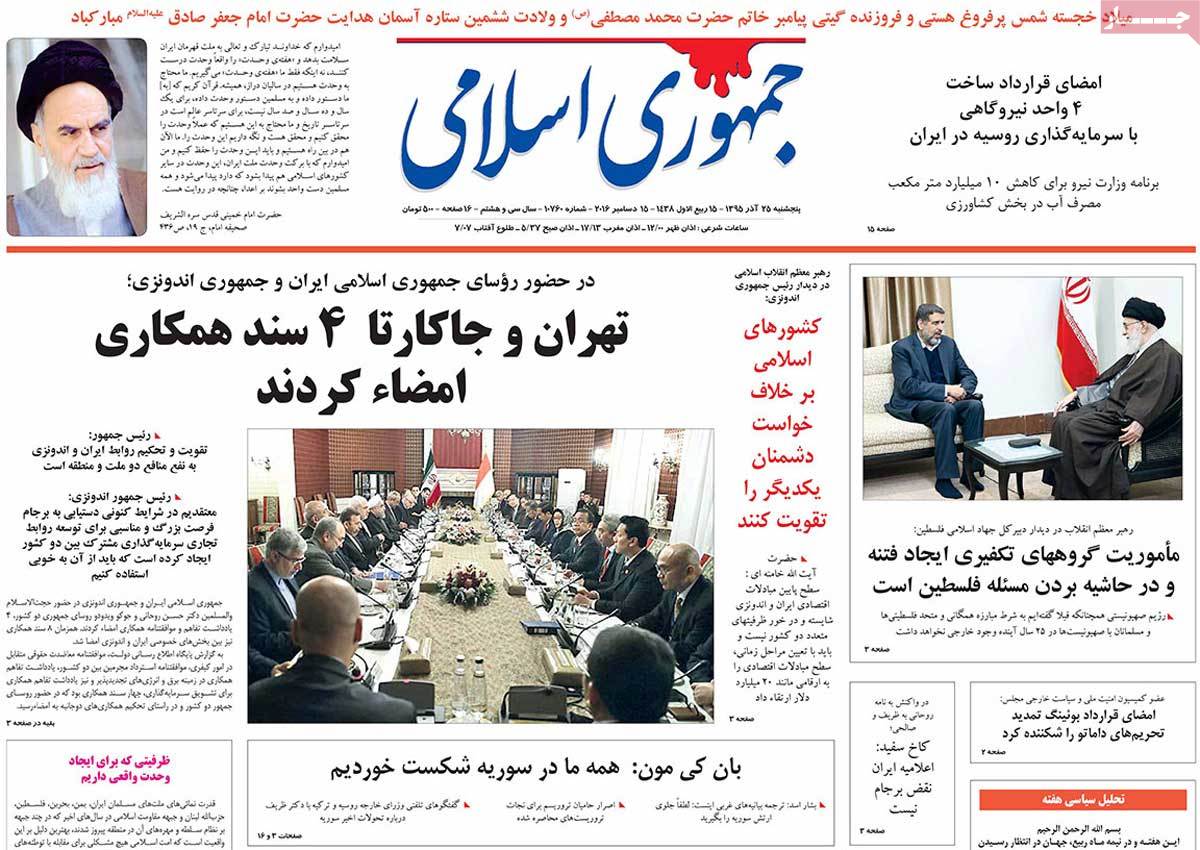 1- Resistance Is the Only Way to Save Quds, Other Ways Are Futile: Iran’s Leader 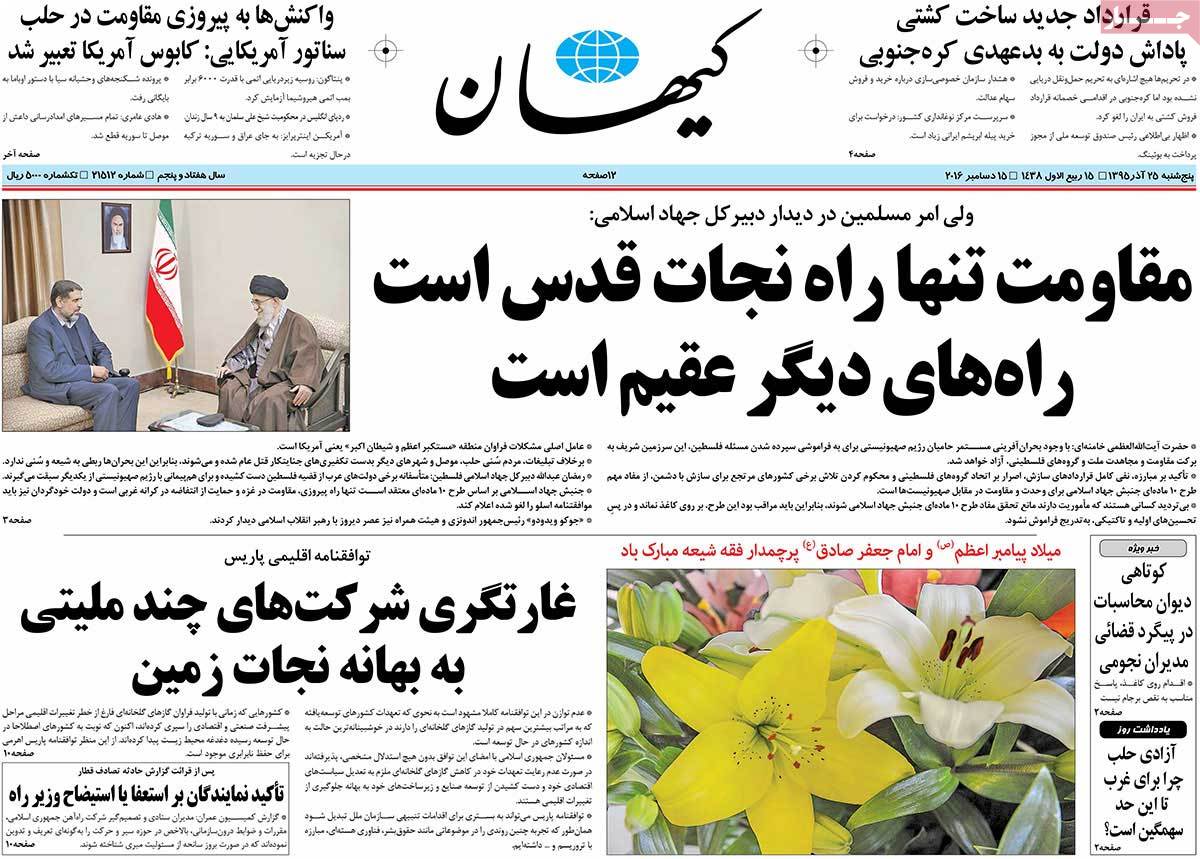 1- Signs of Gap between Europe and US Caused by JCPOA 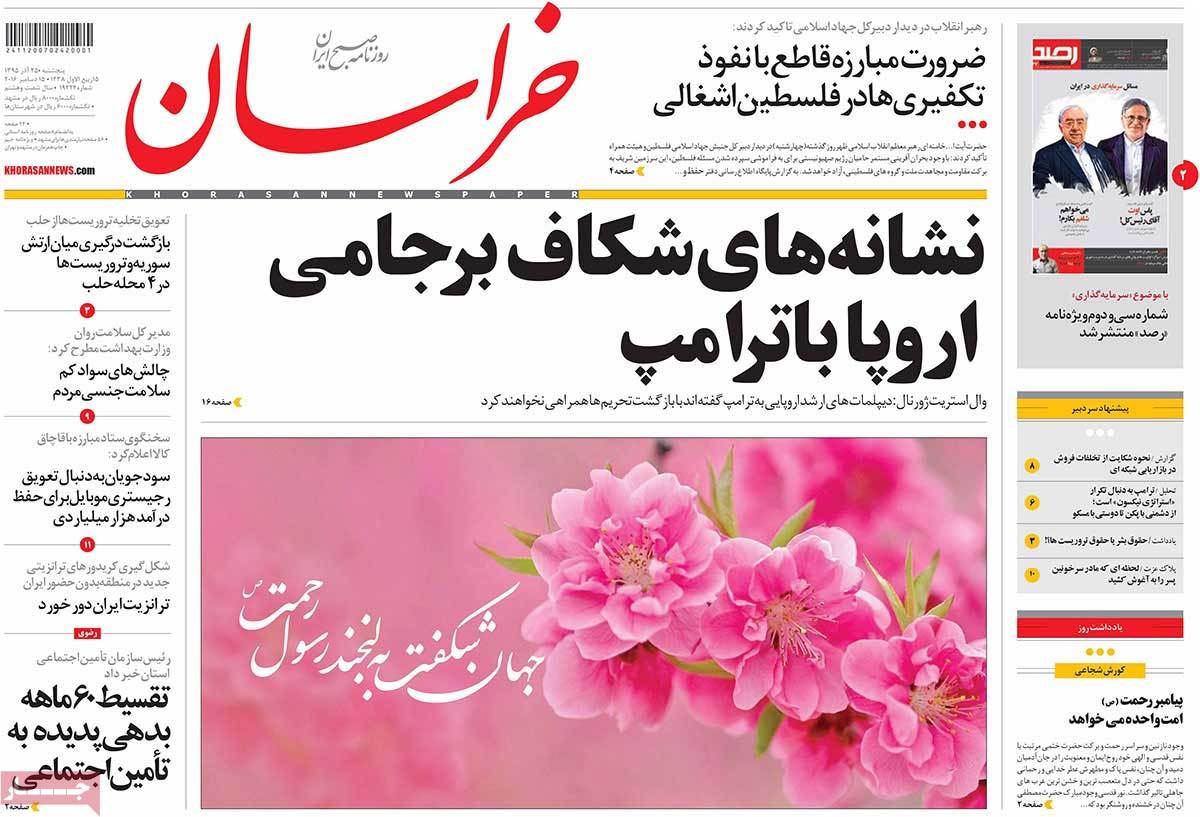 1- Main Cause of Regional Problems Is US, the ‘Bigger Satan’: Iran’s Leader

2- Ayatollah Makarem Shirazi: We Should Move Away from Our Commitments as Much as West Has Violated JCPOA Obligations 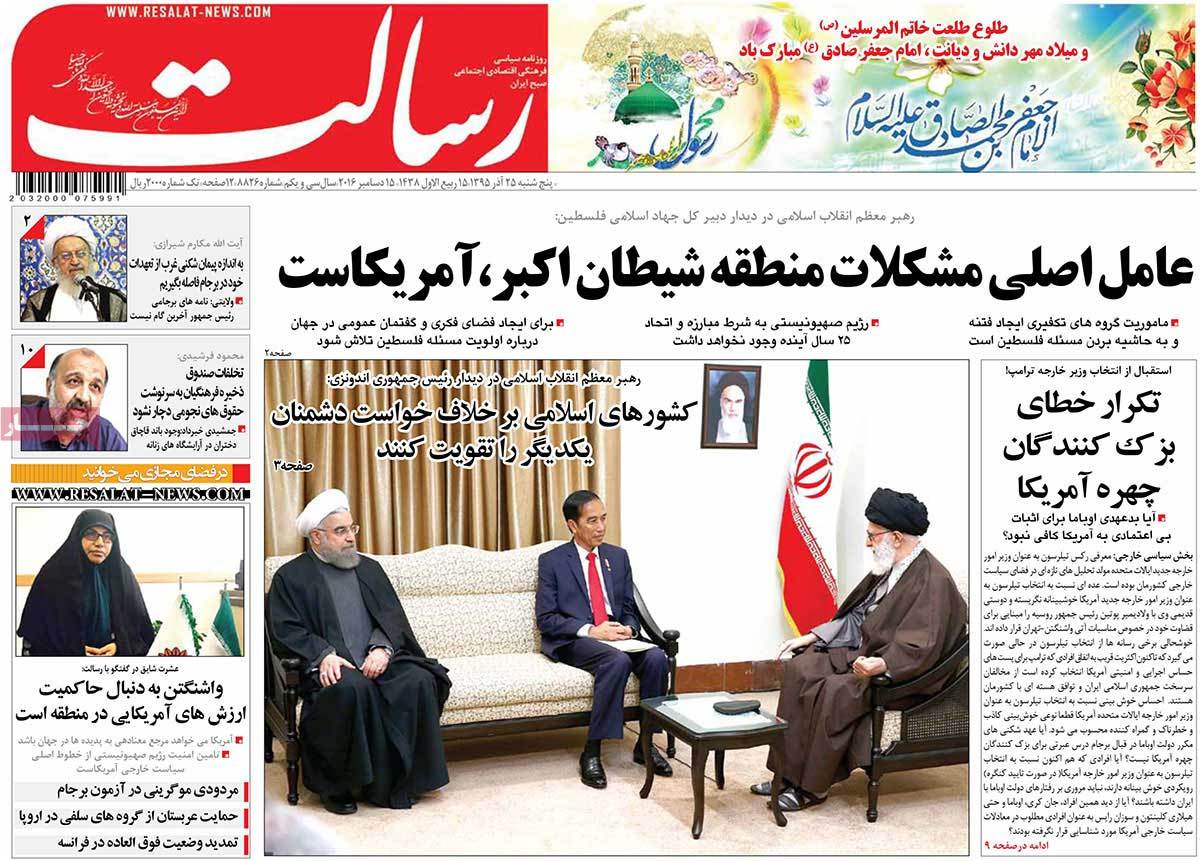 1- Innocent Prisoners Will Receive Compensation: Based on Judiciary’s New Law, Government and Judges Who Issue Wrong Sentences Are Obliged to Pay Compensation 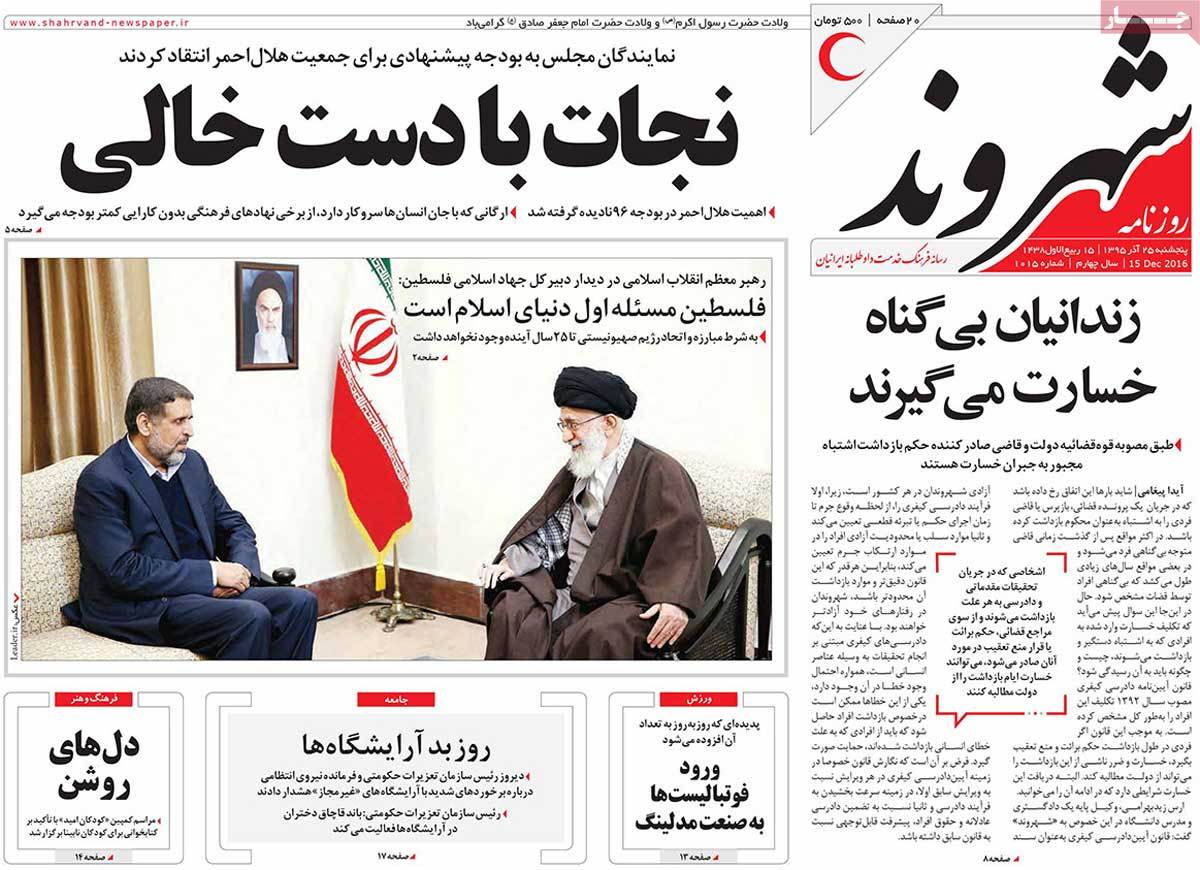 1- How Was Aleppo Liberated 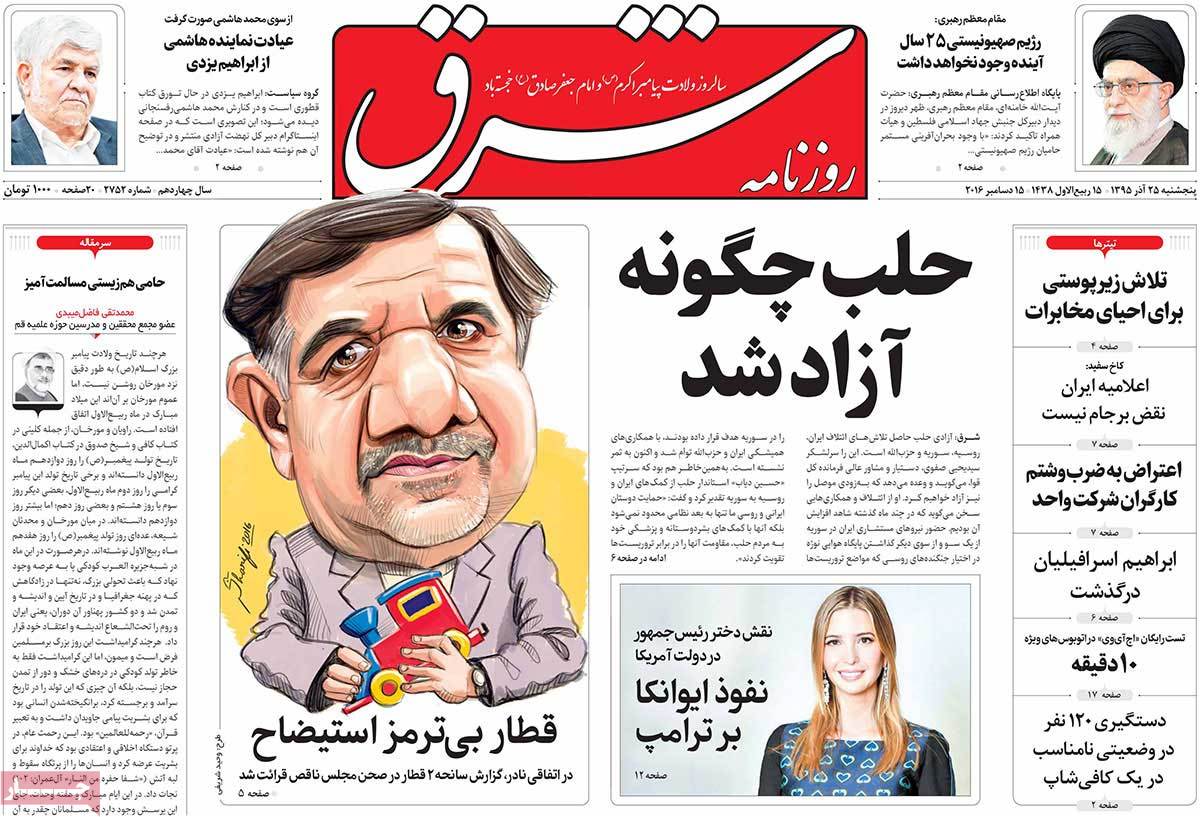