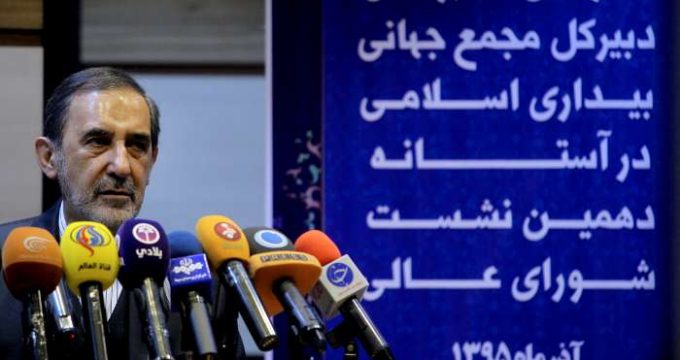 Velayati: Rouhani’s order on ISA not to be Iran’s last measure

MNA– Leader’s senior adviser Velayati said President Rouhani’s orders to FM Zarif and AEOI Head Salehi in response to renewal of Iran Sanctions Act (ISA) by the US were first but not last measures to be taken by Iran.

Addressing the press conference of the 10th meeting of the Islamic Awakening Supreme Council on Wednesday morning in Tehran, Chairman of World Forum for Islamic Awakening (WFIA) Ali Akbar Velayati said “the previous meeting of WFIA was held in the Iraqi capital of Baghdad less than two months earlier and given the rapid developments in Iraq, Syria and Yemen, as manifestations of Islamic Awakening, Shia and Sunni scholars from all over the world have gathered once more for the 10th summit to be held in Tehran.”

On aims and objectives of the summit, which will kick off on Thursday evening in Parsian Azadi Hotel of Tehran, Velayati said the four axes of talks in the event include life of Prophet Muhammad as the best model of Islamic Awakening, pathology and future developments of Islamic awakening, investigating venues to deal with Takfiri movements as well as Palestine as top priority of Islamic World and the need for Islamic countries to confront the Zionist regime.

He said Saudi regime has been killing innocent people of Yemen over the past one and a half years, “Abdrabbuh Mansur Hadi, who was Saudi Arabia’s favorable choice as presidency of Yemen, will never gain power again since Yemenis managed to control their country by forming Supreme Political Council, a coalition between the Houthi Ansarullah movement and former president Ali Abdullah Saleh’s General People’s Congress party.”

Head of Strategic Research Center Velayati further noted that “an imminent victory is also being achieved in Mosul as the last shelter for terrorists in Iraq.”

On Aleppo liberation, the official said the Syrian city have been completely cleared from terrorists and will remain as a safe location henceforth; “Aleppo remains as Syria’s most important political and trade city after Damascus.”

He stressed that the 10th meeting of the Islamic Awakening Supreme Council on December 14 will be a non-governmental session which will be only attended by Shia and Sunni scholars.

Velayati, a member of the  JCPOA Supervisory Committee, responded to a reporter’s question on Rouhani’s recent order to Iran’s Zarif and Salehi to take proper measure against violation of the Joint Comprehensive Plan of Action (JCPOA) by explaining “Iran took part in nuclear talks in line with international regulations and on the basis of JCPOA provisions, Iran had agreed to halt nuclear activities for a specified period and Americans, in turn, has promised to prevent extension of sanctions against Iran.

He deemed US actions as blatant violation of JCPOA maintaining that all parties possesses the right to make complaints and Iran would take steps as needed.

He said Iran would never consent to American sanctions and the US would be the main loser at the end of the day; “Rouhani’s orders to the two senior Iranian officials marked Iran’s first reactions though they will not be our final step.”

When asked on Iran’s stance on frequent threats by Saudi Arabia, the official said it was needless for Iran to react to immature comments made by Saudi foreign minister.

Velayati later pointed to financial and military support of thousands of Takfiri forces in Syria and Iraq by the US and certain regional states adding “Takfiris have suffered a defeat in the international, regional and Syrian fronts.”

While stressing the significance of Aleppo liberation, Leader’s senior adviser Velayati deemed the victory as a turning point for Syrians since their future would have remained unknown had they suffered a defeat in the operation.