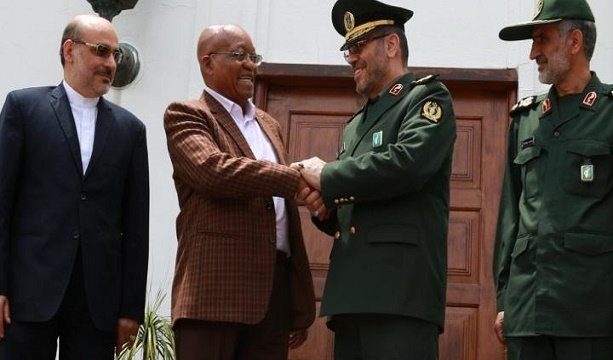 S Africa not to let anyone damage ties with Iran

The South African President made the remarks in a meeting with Iranian Defense Minister Brigadier General Hossein Dehghan who led a high-ranking defense-military delegation to Pretoria on Tuesday at the official invitation of his counterpart Nosiviwe Noluthando Mapisa-Nqakula.

President Zuma expressed his satisfaction over the visit of DM Dehghan and lauded Iran and South Africa as two significant and independent countries, calling for development of bilateral relations in all areas of mutual interest.

The Iranian defense minister, for his part, highlighted the long-standing relations between the two countries in the fight against apartheid, as well as the friendly ties developed between the two nations during the two decades after the elimination of apartheid, adding “improving the level of relations with South Africa in all areas is among the top priorities of Iran’s foreign policy.”

Dehghan thanked South Africa for their positive position toward the peaceful nuclear activities of Iran, and maintained that the recent visit of President Zuma to Tehran has given new impetus to further defense and military cooperation between the two countries.

He underscored the perfect conditions for investing in Iran following the signing of the nuclear deal with 5+1, adding “we are keen on expanding cooperation and receiving investment from countries such as South Africa that have adopted fair and principled positions to defend what is right and just.”

The Iranian FM further discussed the latest status on combating terrorism in West Asia, adding “the analysis of developments in the region is not possible without considering the ideology of terrorism and reasons for its reproduction, state sponsors and their intended interests, consequences and damages of terrorism and strategies to combat and eradicate this scourge.”