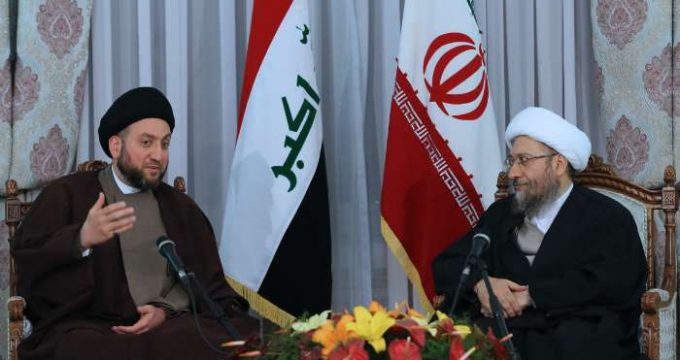 IRNA – Judiciary Chief Ayatollah Sadeq Amoli-Larijani on Tuesday underlined the need for further development of Iran-Iraq ties, saying that given its ancient civilization and history, Iraq deserves due status in the Muslim World.

He made the remarks in a meeting with head of Iraq National Coalition Seyyed Ammar Hakim.

He added that the national coalition has taken effective steps to improve the security situation in the country.

Stressing the need for enhancement of Tehran-Baghdad ties, he said that such meetings and communications will help improve empathy and coordination between the two countries.

Expressing pleasure with the advances made in the fight against terrorism in Iraq, Larijani hoped that full security would be restored in Iraq.

Given broad communications between the two countries, bilateral ties are expected to promote to higher levels, he said, underlining the need for boosting cooperation within the framework of maintaining Iraqi national solidarity and independence.

Hakim, for his part, pointed to recent success of the National Coalition, saying that its solidarity prompted over two thirds of the parliament vote for Mobilization Force Law.

He further noted that Arbaeen procession with a great meaning deepened empathy and solidarity among the Shia Muslims.

The Iraqi National Coalition attempts to take advantage of solidarity in a bid to take strong steps and turn the security challenges to opportunities, the Iraqi leader said.