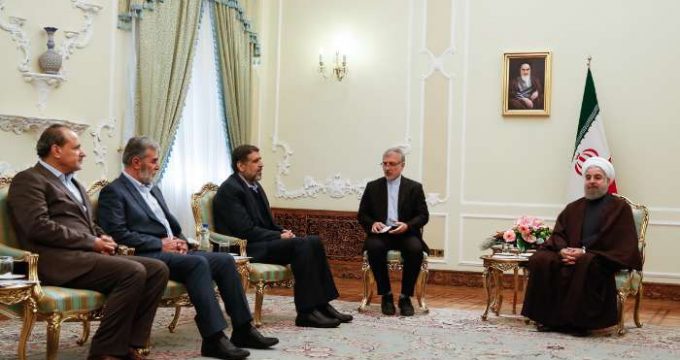 MNA – Iran’s President said the Israeli regime has been taking advantage of security issues in region for two decades, saying the world needs to wake up to the fact that Israel has never sought peace.

Iranian President Hassan Rouhani made the remarks in a meeting with Ramadhan Abdullah, Secretary General of Islamic Jihad Movement in Palestine, in Tehran on Tuesday, adding “today in many regional countries such as Afghanistan, Pakistan, Iraq, Syria, Lebanon and even in some countries of North Africa such as Egypt and Libya, the Israeli regime has created the perfect condition for terrorists so that these regions would be preoccupied with their own security problems and remain ignorant of the Palestinian issue.”

President Rouhani stressed that the liberation of Quds and realization of the rights of Palestinian people must be the first priority of the Middle East.

“There is a strong argument today for the world’s public opinion that the Zionist regime has never been after preserving peace. We need to use this reasoning to show that there is no way other than jihad and resistance for Palestinians against this occupying regime,” Rouhani added.

Rouhani maintained that the public opinion in the US and Europe needs to be awakened to the fact the Zionist regime cannot be a reliable ally for them.

The President further added that the victorious resistance of people in Gaza and Lebanon has cast a serious doubt on the beliefs of Zionists and their supporters in Europe and US over the capability and invincibility of the Israeli regime.

The Palestinian official, for his part, thanked Iran for its continuous support to the people of Palestine and the resistance front, adding “if it had not been for the support of the Islamic Republic of Iran to the resistance of Palestinian people, today we could not be able to convey our positions and remarks to the world.”

“The Palestinian nation, despite all the pressures, has never felt exhausted from resisting against the Zionist regime, and will continue its path with a renewed passion for resistance among its younger generation,” he stressed.