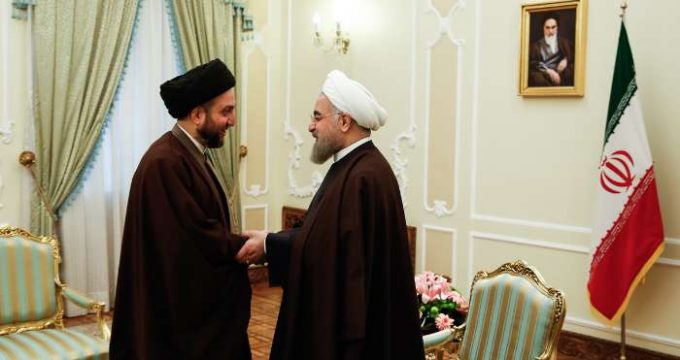 “Unfortunately, deeds and words by certain big powers show that they are still after sowing discord among the Iraqi people,” Rouhani said in a meeting with the head of the Iraqi National Alliance (INA), Ammar al-Hakim, in Tehran on Tuesday.

He added that those against Iraq’s unity and territorial integrity seek to create discord among Iraqi people of various ethniticies and faiths in order to prepare the ground for advancing their own plots.

He hailed as very valuable the recent political and military achievements made by the Iraqi people, government and armed forces in thwarting foreign plots and fighting terrorism.

“The Iranian nation and government will stand by the oppressed people in the region, including Iraq and Syria, in this fight [against terrorism] and will spare no efforts in this path,” Rouhani said.

The Iranian president also underlined the significance of developing Tehran-Baghdad relations in political, economic and cultural sectors and said any obstacles in the way of bolstering ties must be removed.

Hakim, for his part, commended the Islamic Republic’s support for the Iraqi government and nation.

He said Iran and Iraq must expand relations given the willingness of two countries’ people and added that such exemplary ties must serve as a model in the region.

On Sunday, Leader of the Islamic Revolution Ayatollah Seyyed Ali Khamenei received the INA head and advised the Iraqi National Alliance not to trust the Americans.

The Leader said the United States has never been seeking to root out Takfiri terrorism, but it is rather making efforts to preserve some terror groups in the Middle East to advance its goals, warning that Washington has always been against powerful Muslim countries such as Iraq.

INA, which holds the majority of seats in the Iraqi parliament, includes four political parties, namely the State of Law Coalition, the Islamic Supreme Council of Iraq, the National Reform Trend Party and the Sadrist Movement.