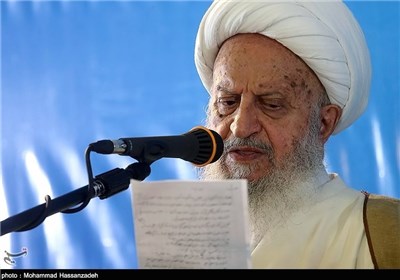 ABNA- Speaking during his jurisprudence class at Qom’s Grand Mosque, Grand Ayatollah Naser Makarem-Shirazi reacted to the extension of the Iran Sanctions Act and the violation of the Joint Comprehensive Plan of Action (JCPOA) by the United States.

Ayatollah Makarem-Shirazi noted that from the issues that we have seen over the last few decades, we have understood that all of the laws and decisions have a red line in regard to their illegitimate interests and if these interests are dealt with, neither democracy nor human rights will have any meaning.

In this regard, he added that the United Kingdom has given more than $2 billion worth of weapons to Saudi Arabia and they know where these funds are spent and because of Saudi hush money, the United Nations has retreated from its claims against Saudi Arabia and says that Saudi Arabia hasn’t committed any crimes in Yemen.

“This means that when interests come to selling weapons to such a massive amount, all other issues can be violated,” he said.

Ayatollah Makarem-Shirazi said that democracy is the slogan of the West but because their interests in Syria don’t conform with democracy, their illegitimate interests are considered one of their red lines.

The teacher in the Islamic Seminary of Qom added, “The elected government of Syria says ‘we’re ready for another election’ but the West will not allow it but don’t they say democracy is good and there should be a government of the people?”

He added that even the UN has accused Saudi Arabia of killing children in Yemen but red lines came against and interests didn’t allow this issue to be pursued.

Ayatollah Makarem-Shirazi stressed, “In such a world, if we speak the language of law, treaties and the JCPOA, no one listens and it isn’t much use. We negotiated for a year and now they say they will tear up the agreement. We must not trust the West, especially the US.”