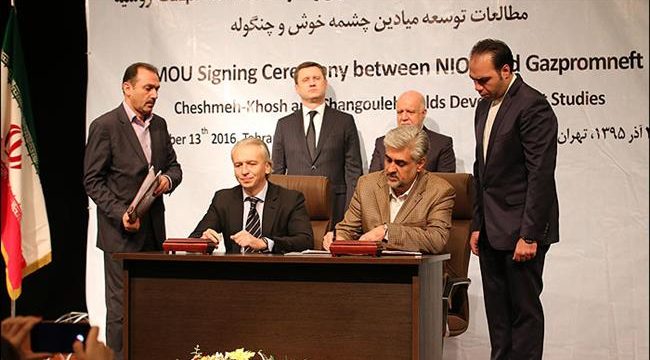 The MoU was signed at the presence of the visiting Russian Energy Minister Alexander Novak and Iran’s Petroleum Minister Bijan Zanganeh. Based on it, Gazprom Neft – the fourth largest oil producer in Russia and a subsidiary of the country’s gas giant Gazprom – would study the development of Changuleh and Cheshmeh Khosh oil fields in Ilam province.

Changuleh – which sits on Iran’s border with Iraq – is already proving to have become one of Iran’s emerging top oil project prizes.

Iran’s oil officials had previously said that Changuleh could be linked to another nearby field named Azar.

Azar, itself, is believed to be connected to Iraq’s Badra oil field.

Azar and Changuleh were discovered in 2005 as a result of explorations conducted by a consortium comprising Russia’s Lukoil and Norway’s Statoil.  Both fields – together with Iraq’s Badra – are believed to hold an in-place reserve of about 3.5 billion barrels.

Cheshmeh Khosh – a second oil field that Gazprom Neft would study under the MoU it signed in Tehran on Tuesday – was discovered in 1975 but is yet to start production. Its projected production target is 18,000 barrels per day (bpd) and 115 million cubic feet per day (mcf/d) of natural gas.

Austria’s OMV had recently indicated that it was interested in the development of Cheshmeh Khosh.

The company was previously involved in the development of the field but withdrew from it in 2008 after a series of draconian US-engineered sanctions were imposed on Iran.