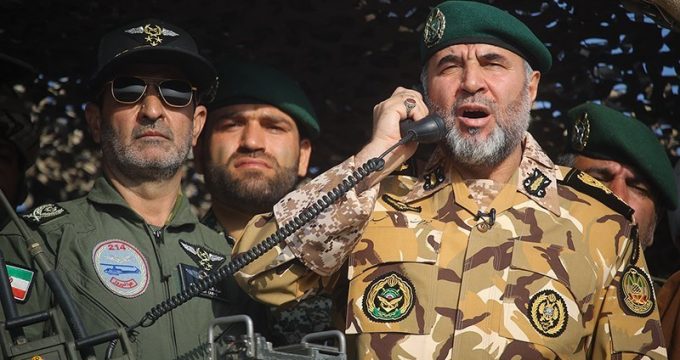 Tasnim- Iran’s Army Ground Force commenced the second day of a large-scale military exercise in the country’s southeastern regions on Monday with the aerial bombardment of targets along the coasts of Makran, by the Sea of Oman.

The drill, codenamed “Muhammad Rasulullah-4” (Muhammad, the Messenger of God), resumed on Monday morning with the aerial support of fighter jets from the Air Force.

Two Dassault Mirage F1 warplanes hit ground targets on the Makran coasts at the beginning of the Monday’s operations.

The Ground Force also unveiled and brought into service a series of new equipment, including homegrown snipers.

Covering an area of more than 220,000 square kilometers southeast of Iran, the war games take place in three main stages.

In September, Chief of Staff of the Iranian Armed Forces Major General Mohammad Hossein Baqeri said there will be no delay or slowdown in the country’s military tests and war games, adding that Iran has devised comprehensive defensive strategies to counter all threats.