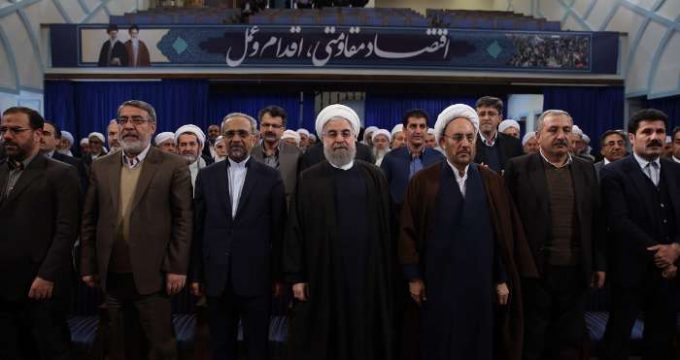 President Rouhani meets Sunni Ulema from all over country

IRNA – A number of Sunni senior clerics from all over the country met with President Hassan Rouhani Sunday morning.

The meeting took place in the first day of Unity Week which marks the week-long gap between the birthday dates of the Islamic Prophet observed by the Shia and Sunni Muslims.

During the meeting, a number of Sunni Ulema stressed the need for further unity between the Shia and Sunni Muslims and condemned the terrorist acts by the Daesh terrorist group in Syria and Iraq.

They also expressed their views on some of regional and international developments.

Addressing the opening of the 29th Islamic Unity International Conference last year in Tehran, President Rouhani warned the Islamic world that world powers tried to depict Islam as a religion of violence.

Islamic extremist groups are creating a militant picture of Islam that is benefiting only Israel and the Zionist movement, he added.

He emphasized the importance of bringing an end to extremism from terrorist groups such as Daesh that have committed attacks against Muslims in the name of Islam.

“It is our greatest duty today to correct the image of Islam in world public opinion,” Rouhani said.

“Did we ever think that, instead of enemies, a small group from within the Islamic world using the language of Islam, would present it as the religion of killing, violence, whips, extortion and injustice?” Rouhani said.

Rouhani said Islamic principles opposed violence, and the extremism of groups such as the Daesh stemmed from “narrow-mindedness and a lack of moderation.”

Rouhani criticized Muslim countries for “being silent in the face of all the killing and bloodshed” in Syria, Iraq and Yemen.