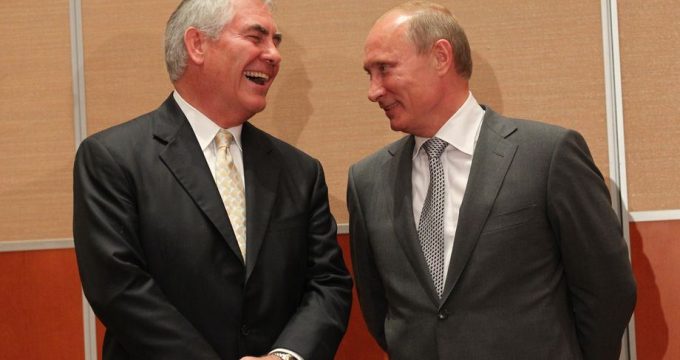 VOX| Zeeshan Aleem: Donald Trump is expected to nominate Exxon Mobil CEO Rex Tillerson as his secretary of state, adding a corporate executive with extensive ties to Russian President Vladimir Putin to his presidential cabinet. Tillerson has relationships with many world leaders, but has never served in government or taken public positions on many of thorny issues he would confront as the nation’s top diplomat.

Tillerson, 64, has spent a decade as the CEO of Exxon, the largest oil company in the world. A late addition to Trump’s shortlist for secretary of state, Tillerson got the nod over more prominent political figures like Mitt Romney, the 2012 Republican nominee for president, retired Gen. David Petraeus, and former New York City Mayor Rudy Giuliani, who publicly pulled himself from consideration once it became clear he wasn’t going to get the post.

Despite spending his entire career in the private sector, Tillerson arguably has more direct experience negotiating with foreign leaders than any of those other contenders. Exxon, whose market value is $370 billion, has operations in more than 50 countries across six continents. The relationships Tillerson has cultivated with businesspeople and governments across the globe could serve him well as the nation’s top diplomat.

“Oil folks know stuff: anyone who manages multi-billion dollar, multi-decade projects needs deep, nuanced understanding of political context,” Suzanne Maloney, deputy director of the foreign policy program at the Brookings Institution and a former employee of Exxon (although not directly under Tillerson), tweeted. “In this sense Tillerson’s business experience gives him very different lens than other execs in Trump cabinet — and very relevant for diplomacy.”

One of those relationships is with Putin, and two of Trump’s fellow Republicans have already signaled that they plan to closely scrutinize Tillerson’s views on Russia and his ties to the Russian president. Trump has continually spoken of his desire to build a stronger relationship with Putin, surprising many Republicans with his public embrace of a strongman who has crushed dissent in his own country, ordered the killings of political rivals, and invaded several of his neighbors.

“I don’t know the man much at all, but let’s put it this way: If you received an award from the Kremlin, [an] order of friendship, then we’re gonna have some talkin’,” Sen. Lindsay Graham of South Carolina told the Washington Post. “We’ll have some questions. I don’t want to prejudge the guy but that’s a bit unnerving.”

Exxon has a number of joint ventures with Russia’s state-owned oil company Rosneft, and according to the New York Times has “contributed to social programs in education and health” in Russia. Tillerson put together an energy partnership with Russia in 2011 that Putin has estimated could end up worth $500 billion. In 2012, Tillerson was awarded an “Order of Friendship” decoration from the Russian government, and has been photographed smiling next to Putin.

Reports of Tiller’s expected nomination came just hours after the Washington Postreported that the CIA believes that Russia’s hacking during the 2016 election was designed to help Trump win the White House, not simply cause Americans to lose faith in the electoral process more generally.

That, in turn, raises new questions about why Moscow wanted Trump to win the presidency — and about whether Trump tapped Tillerson not in spite of his ties to Putin, but because of them.

Tillerson has huge conflicts of interest

Trump has been known to change his mind at the last minute, and it’s possible he will reverse himself and choose someone else to run the State Department (NBC reported that the deputy secretary of state job would go to John Bolton, an uber-hawk who served as the US ambassador to the UN during the George W. Bush administration).

Even if he’s confirmed, however, there’s no guarantee that Tillerson will get the post. Democrats would only need a handful of Republican votes to block the nomination, and Graham and Arizona Sen. John McCain have already voiced concern about the pick. Tillerson is also an ideal nominee for Democrats to rally against — beyond his ties to Russia, he’s a wealthy oil executive who made his money in fossil fuels while heading a company that historically has contributed large amounts of money to organizations working to undermine the scientific consensus on global warming.

Tillerson would also face serious questions about potential conflicts of interest, given that much of his personal wealth is tied up in Exxon stock — and that the value of those shares could rise or fall depending on the foreign policy choices Tillerson would now be charged with helping to make and implement. Slated to retire next year, Tillerson’s Exxon shares are currently worth at least $151 million.

Lawmakers are likely to specifically press Tillerson about comments he made in 2014, when a deal he’d struck with Rosneft to jointly explore oil fields in the Arctic collapsed due to the sanctions the US imposed on Russia in the wake of its invasion of Ukraine and annexation of Crimea. Tillerson blasted the measures, which he said do “broad collateral damage.”

Another red flag concerning corporate conflict of interest comes from the way Tillerson made his way to the top of the list of candidates for secretary of state. As Politico reports:

Tillerson was brought into Trump Tower for an interview with Trump at the recommendation of former Secretary of State Condoleezza Rice and Defense Secretary Robert Gates, who count Exxon among their private consulting clients, according to two sources familiar with the conversations.

Tillerson’s supporters would be sure to note that he came to Trump’s attention because of the de facto endorsement of Gates and Rice, two of the party’s most experienced and respected national security experts. Critics, though, would doubtlessly point out that Gates and Rice are far from disinterested observers and would instead — like Tillerson himself — stand to benefit financially from Exxon’s gains.

Tillerson could get around those concerns by selling all of his Exxon shares or placing them into a blind trust, but it’s not clear whether he would be prepared to do so — or if Trump, who has ignored similar calls to disengage from his own vast business holdings, would pressure him to do so.

Tillerson hasn’t had to weigh in on the issues likeliest to dominate his time as secretary of state, from the war against ISIS to how to deal with China’s increasingly aggressive actions in the South and East China Seas to the growing belligerence of nuclear-armed North Korea. Exxon has struck energy deals with numerous Arab nations, but it’s also not clear what Tillerson thinks of the Obama administration’s nuclear deal with Tehran or on the stalled Israel-Palestinian peace process.

At the moment it’s also unclear how Tillerson will handle climate change policy, which has been a huge priority for John Kerry, the current secretary of state. Tillerson and Exxon have acknowledged the threat of global warming and backed the Paris climate deal in the recent past. But Exxon has a long history of funding dozens of organizations and lobbyist groups seeking to undermine scientific findings on climate change. It wouldn’t be surprising if Tillerson considered combating climate change to be a very low priority, if one at all.

For Democrats, that issue isn’t as dramatic as his literal past embrace of Vladimir Putin, but expect it be a major part of Tillerson’s confirmation hearings all the same.