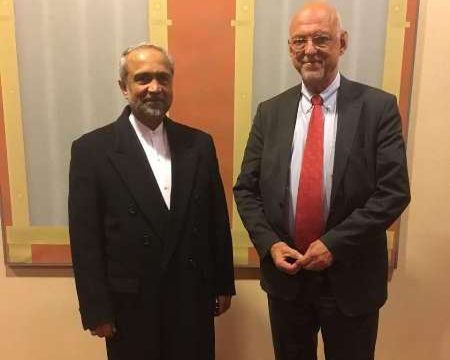 Official stresses Sweden’s political will to develop ties with Iran

IRNA – A senior Sweden official stressed the political determination of his country to develop relations with Iran in all areas.

Hans Dahlgren who is the State Secretary to Sweden’s Prime Minister made the remarks in a meeting with visiting Iran’s Presidential Chief of Staff Mohammad Nahavandian here on Friday.

In the meeting, Dahlgren described Iran as a country which enjoys great capacities both in world and the region.

He further welcomed widening of economic cooperation with Iran.

Already, he added, Stockholm has benefitted from positive relations with Tehran; stressing his country is willing to boost interaction with Iran more than before.

He went on to say that Sweden is determined to establish serious cooperation with Iran in all fields, particularly in transportation, environment and ICT (information and communications technology).

Holding talks and meetings on taking the practical steps to those ends is Sweden’s priority, Dahlgren noted.

For his part, the Iranian official elaborated on the appropriate atmosphere that has been created in Iran in the post-Joint Comprehensive Plan of Action (JCPOA) era, stressing such a positive atmosphere as well as Iran’s special geopolitical position betokens a bright economic future.

Nahavandian said that the Iranian government has plans to facilitate cooperation with foreign institutions in various areas including oil, energy, environment and transportation.

Nahavandian is in Sweden since Thursday evening (December 8). Earlier, he visited Switzerland on December 7 to discuss promotion of bilateral banking relations and financial cooperation in meetings with the Swiss president and bankers.