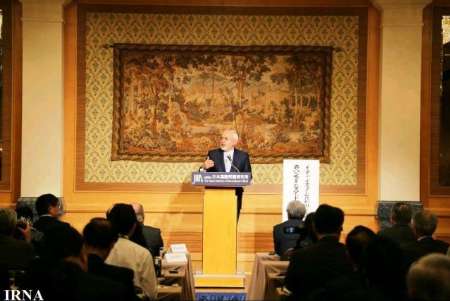 IRNA – Foreign Minister Mohammad Javad Zarif said on Friday that Iran is ready to have interaction and cooperation with the world.

Addressing a group of Japanese intellectuals working on international affairs (JLLA), he said nuclear deal is not a bilateral agreement between Iran and the US enabling the US to resume talks or walk it out, but it is a type of agreement that the European Union has been directly involved and the United Nations has approved through a Security Council resolution.

the Joint Comprehensive Plan of Action (JCPOA) is a multilateral treaty and it will be to the benefit of the US and other sides to remain committed to such internationally recognized treaty.

The best scenario for the Americans is to return the economic sanctions to its previous status since the sanctions will not bear fruits to them. If they could have destroyed our economic system through sanctions, they would not have attended the negotiation table, he said.

‘We have learned how to ensure our security with reliance on our people and seeking interaction with the world, but if such ties are cut, we will not die,’ he said.

During economic sanctions, Iran attained significant developments in various fields since the will of Iranians never failed and to the same reason, Iran tries to continue its efforts along with its friends at the international community to continue sound implementation of the JCPOA, Zarif said.

For many years, each party insisted on its own stands, he said, adding that Iran underlined its legitimate nuclear right and the US claimed that Iran should not have even one single centrifuge, but that way of dealing with the issue could not last for ever, he said.

When President Rouhani took office, Iran redefined the issue and adopted a different approach in handling the problem, the foreign minister said.