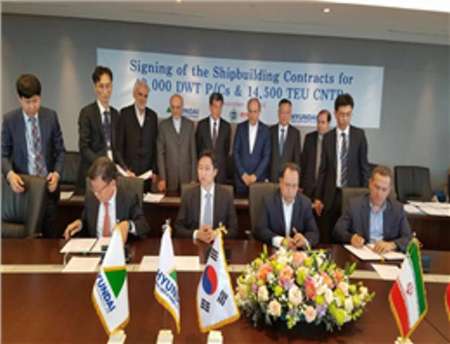 Financed by South Korean banks, the contract was inked between representatives of the IRISL and the HHI on Friday morning.

The ships will be delivered to Iran starting in the third quarter of 2018.

Discussions with the company over IRISL’s vessel orders had started last December.

The contracts were parts of the IRISL’s plans to renovate its fleet through a total investment of $2.5 billion.

The company operates about 115 oceangoing vessels, but many of the ships are old, have been deemed unsafe to travel and cannot be insured.

The agreement marks Iran’s first deal with a foreign shipbuilder since the removal of anti-Tehran sanctions.

The sanctions were lifted after Tehran and the Group 5+1 (Russia, China, the US, Britain, France and Germany) on July 14, 2015 finalized a lasting nuclear deal and started implementing it on January 16, 2016.