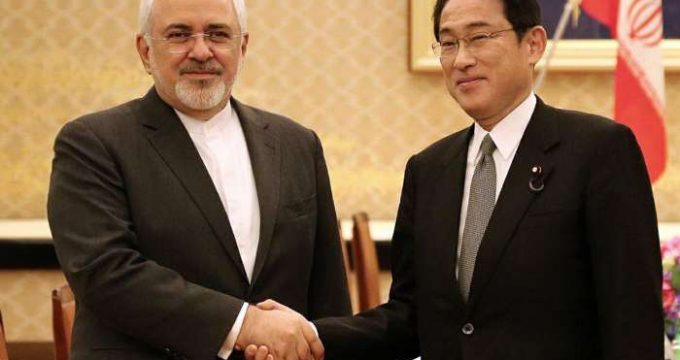 Iranian Foreign Minister Mohammad Javad Zarif said on Thursday it was in the interest of the United States to remain committed to a multilateral nuclear treaty.

Japan to give Iran $2.1 million for nuclear security to help lift sanctions

Japan has made a decision to provide Iran with 2,05 million euro (about $2.1 million) through the International Atomic Energy Agency (IAEA) for the purposes of nuclear security to help the country implement its obligations under the nuclear deal and ensure the lifting of sanctions, Japanese Foreign Minister Fumio Kishida said Wednesday.

Iran is showing signs of attracting major foreign investment in its long-neglected oil fields. That’s good news for its economy, and it could make it harder for Donald Trump to reinstitute sanctions against the country should he try to fulfill his promise to rip up President Obama’s controversial nuclear deal with Tehran.

Foreign Minister Mohammad Javad Zarif said on Wednesday that the only way out of crises in Yemen, Syria and Bahrain is that Saudis must stop support to terrorist groups.

Financing is the main hurdle facing companies looking at doing business in Iran, Bilfinger (GBFG.DE) Chief Executive Thomas Blades said in German newspaper Handelsblatt and he also said it would take time for the country to regain investors’ trust.

The European Union has banned Iran’s Aseman Airlines from operating within the EU due to safety concerns, in a blow to Tehran which is buying new jets to renew the country’s ageing fleet following the lifting of long-term sanctions.

President-elect Donald Trump has vowed to talk to North Korea and improve relations with Russia—the two countries which currently present the greatest challenges on nuclear security. If Trump is serious about pursuing these worthy goals, he must keep the Iran nuclear agreement. Apart from being disastrous in itself, scrapping the deal would doom any attempt by the Trump administration to engage Moscow and Pyongyang.

Syrian President Bashar al-Assad says victory in the battle for the city of Aleppo will be “a huge step” in bringing the war in Syria to an end.

Defense minister has told ICRC head requests for ceasefire in Aleppo is a contrivance to improve the odds of terrorists.