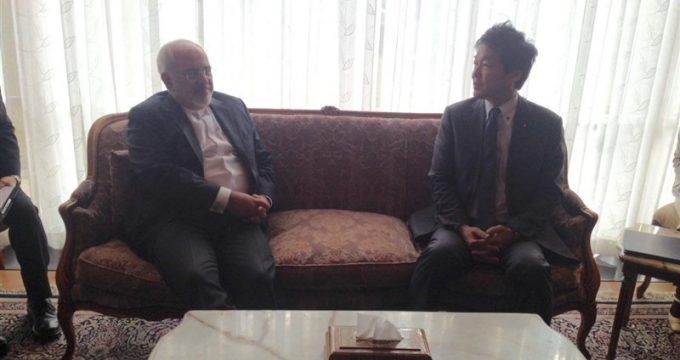 During the meeting in the Iranian ambassador’s residence, Zarif and Sonoura underlined development of political, economic and parliamentary relations between the two countries.

They stressed continuation of consultations between Tokyo and Tehran at all levels.

Zarif and Sonoura called for resolution of regiaonal crises through peaceful political ways.

The two officials underlined cooperation for more investment in Afghanistan to fight terrorism and establish stability there.

Iranian foreign minister arrived in Tokyo on Wednesday morning local time on the head of a high ranking politico-economic delegation for talks with Japanese senior officials.

Zarif visited India and China prior to Tokyo and it is the last and third leg of his tour.

He is scheduled to meet with his Japanese counterpart, prime minister as well as some other senior officials.

Zarif is to discuss bilateral ties and the current regional and international issues with Japanese high ranking officials.

He will deliver speeches to Japan International Studies Institute as well as in an economic seminar in the presence of Iranian and Japanese businessmen.

Directors from 38 big companies, 15 from knowledge-based companies and eight commercial banks as well as a number of industrialist and businessmen are accompanying Foreign Minister Zarif.