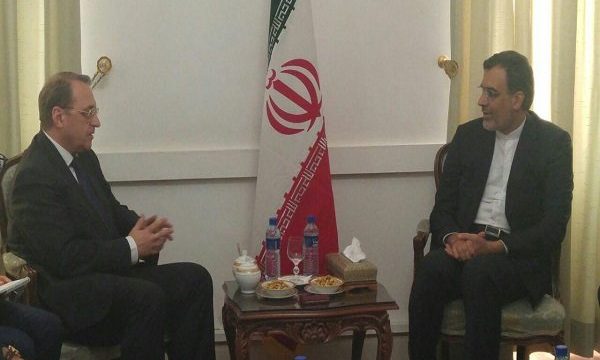 Yemen’s Nat. Salvation Govt. not in conflict with peace talks

MNA– Iran’s deputy FM says the establishment of a national salvation government in Yemen is not in opposition to UN-brokered peace talks, adding the UN roadmap would succeed only if Saudi Arabia adopted the right policies.

Hossein Jaberi Ansari, Iran’s Deputy Foreign Minister for Arab-African Affairs, made the remarks in a meeting with Putin’s Special Representative for the Middle East and North Africa Michael Bogdanov in Tehran on Monday.

Jaberi Ansari was referring to the “national salvation” government of Yemen as sworn in on Tuesday by Ansarullah movement. Ansarullah has assured that the new body will not undermine UN-brokered peace talks, but UN Special Envoy for Yemen Ismail Ould Cheikh Ahmed referred to it as “a new and unnecessary obstacle” for the talks.

The Iranian diplomat added that the future of Yemen will be decided by its own people, and the effective actors on the scene need to help with the formation of Yemeni-Yemeni dialogues and its positive conclusion.

Jaberi Ansari then touched upon the political, humanitarian and field aspects of the Syrian crisis, deeming Iran-Russia’s cooperation on the humanitarian field as a significant priority; “certain actors must not be allowed to abuse the humanitarian issue as a weapon and tool [for their own objectives],” he added.

He also conferred with the Russian diplomat on Lebanon’s development, saying the recent agreement reached in that country, which led to the election of Michel Aoun as the presidency of Lebanon after a 29-month leadership stalemate, could serve as a model for regional agreements among conflicted parties.

He further voiced the Islamic Republic’s readiness to pave the way toward regional agreements in line with the realization of the nations’ demands.

Mikhail Bogdanov, for his part, stressed that all terrorist elements must be removed from the Syrian city of Aleppo, adding “the economic and livelihood problems of the Syrian people are the result of the current crisis and the Western sanctions against Syria which mainly target the people.”

He went on to add, “the West claims to be on the side of the oppressed people of Aleppo while at the same time it imposes sanctions on them.”

The Russian diplomat then referred to the developments in Yemen, calling for an immediate stop to the war in the country. He also deemed national reconciliation as the underlying principle of Moscow on resolving the crisis in Yemen.

He further maintained that the current developments in Lebanon are on the right path, calling for further help and support for the formation of the Lebanese government as soon as possible.