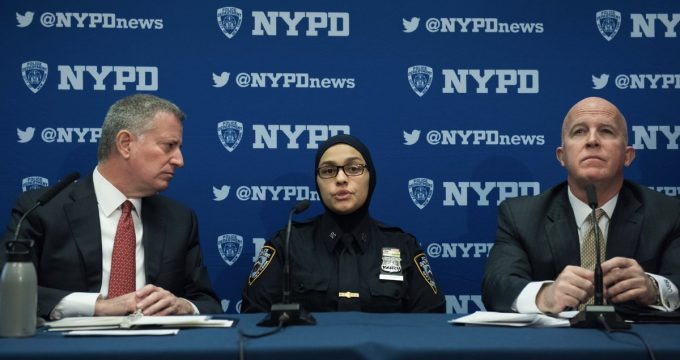 Muslim NYPD officer threatened, told ‘go back to your country’

CNN– New York Mayor Bill de Blasio said he’s “sick to my stomach” over an incident in which a Muslim off-duty NYPD officer was reportedly threatened over the weekend by a man who said, “I will cut your throat, go back to your country.”

The officer, Aml Elsokary, said she had just dropped off her 16-year-old son in Brooklyn Saturday evening when a man begin arguing with the teen. When Elsokary, who was not in uniform, intervened, the man allegedly told her, “ISIS [expletive], I will cut your throat, go back to your country,” before fleeing the scene.
Elsokary, a 34-year-old Muslim-American, is an 11-year-veteran of the NYPD. She was wearing a hijab at the time of the incident, according to the NYPD.
Within 24 hours of the incident New York police arrested Christopher Nelson, 36, and charged him with menacing as a hate crime and aggravated harassment. Nelson was ordered held on $50,000 bail, according to Acting Brooklyn District Attorney Eric Gonzalez.
Nelson’s attorney did not immediately respond to a request from CNN seeking comment.
There are approximately 900 Muslim-Americans currently serving on the NYPD, New York City Mayor Bill de Blasio said Monday at a news conference in which he addressed the threat against Elsokary.
“This is her country, she is an American, she is a New Yorker, and this is her home. We cannot allow this hatred and bias to spread,” de Blasio said.
Elsokary, who regularly wears a hijab while on duty in Brooklyn, was praised for her heroism after she helped save a baby girl and an elderly man from a burning building in April 2014, according to a press release from Brooklyn Borough President Eric Adams.
“I help everybody no matter what your religion is. I’m born and raised here and I am here to protect you all. The department has supported me in wearing my hijab. I want to thank my Muslim officers for standing by my side,” Elsokary said at Monday’s press conference.
The incident involving Elsokary is just one in a recent rash of hate crimes in New York, authorities said.
On Monday, an off-duty Muslim NYC transit employee was assaulted by a male passenger at Grand Central Terminal. The man allegedly called the uniformed employee a “terrorist” and pushed her down a flight of stairs.
The transit employee sustained injuries to her ankle and knee and was transported to an area hospital, according to a statement from Governor Andrew Cuomo, who directed the Metropolitan Transit Authority, the State Police and the state Division of Human Rights to investigate the matter.
“This is the great state of New York — we welcome people of all cultures, customs and creeds with open arms. We do not allow intolerance or fear to divide us because we know diversity is our strength and we are at our best when we stand united,” Cuomo said.
Hate crimes in New York City are up 35% from last year, with a “huge spike” in incidents right after Election Day on November 8, NYPD Chief of Detectives Bob Boyce said Monday. Most of the reported hate crimes have been anti-Semitic in nature, followed by anti-Muslim crimes, Boyce said.
De Blasio said the uptick in hate crimes were “obviously connected to the (presidential) election.”
Critics accused President-elect Donald Trump of fostering xenophobia and Islamophobia during the divisive presidential campaign. In an interview last month Trump said he was “so saddened” to hear about vitriol hurled by some of his supporters against minorities and told them to “stop it.”
“You can’t have a candidate for president single out groups of Americans negatively and not have some ramification for that, not have something as a result of that. It’s very troubling. Look, a few times recently the President-elect has spoken out against it. He needs to keep doing that,” de Blasio said Monday.

CNN’s David Shortell and Shachar Peled contributed to this report.