Sputnik News– The current success of the Syrian army in Aleppo might signify that the ongoing fight against terrorism in Syria is entering its final stage. However Mark Weber, the Director of the Institute for Historical Review underlines that if it weren’t for the help provided by Russia and Iran, the Syrian government would have “never been able to survive.”

Iran’s President Hassan Rouhani said Tehran and Moscow would continue to cooperate in the Syrian war “until the ultimate goal of eradicating terrorism and restoring peace and full security to the region is achieved,” Iranian state news agency IRNA reported on Saturday.

The comment came during the meeting of the country’s leader with Russian special envoy to Syria Alexander Lavrentiev in Tehran. The Iranian leader stressed that the Syrian situation can only be resolved through political dialogue and with full respect for the will of the Syrian people, who he said must have the final word on the future of the country.

Russian soldiers stand next to an aid convoy in Aleppo, Syria, Sunday, Dec. 4, 2016

Meanwhile, Mark Weber, the Director of the US-based Institute for Historical Review has underlined if it weren’t for the help provided by Russia and Iran, the Syrian government would have “never been able to survive.”

Speaking to Iranian 24-hour English language news network Press TV, he noted that the current alliance between Russia and Iran has served as a vital factor which has foiled the US regime change policy in Syria. “It’s [becoming] increasingly obvious to people around the world that the US policy of trying to overthrow the government of President al-Assad has failed. It is based on a very big miscalculation by the Obama administration and it’s not going to work. The only way forward is [through] the increasingly stronger and closer alliance, between Russia, Iran and Syria,” Weber told the network.

Weber reiterated that if Iran and Russia had not been involved in the Syrian conflict, the world would “have been witness to the rise of extremist terrorist elements,” adding that the fact is “widely acknowledged around the globe.”

The historian noted that experts are now trying to second-guess how the new administration will act when it takes office next month in Washington and what changes, if any, it will bring to the Middle East.

During his election campaign Donald Trump, he said, has given conflicting signals about what the US policy in the region might be and so “that’s a big question for the world.”

In a separate comment on the issue, French political scientist Bruno Tertrais suggested that it was Washington which “voluntarily left the field” in Syria and “gave way to Russia” there, making Moscow an “unavoidable” player in deciding the ongoing crisis. In his interview with French Le Monde newspaper he stated that Russia has become an unavoidable player in the settlement of the Syrian crisis due to “western countries lacking the desire, primarily the US, to seriously interfere into the conflict” 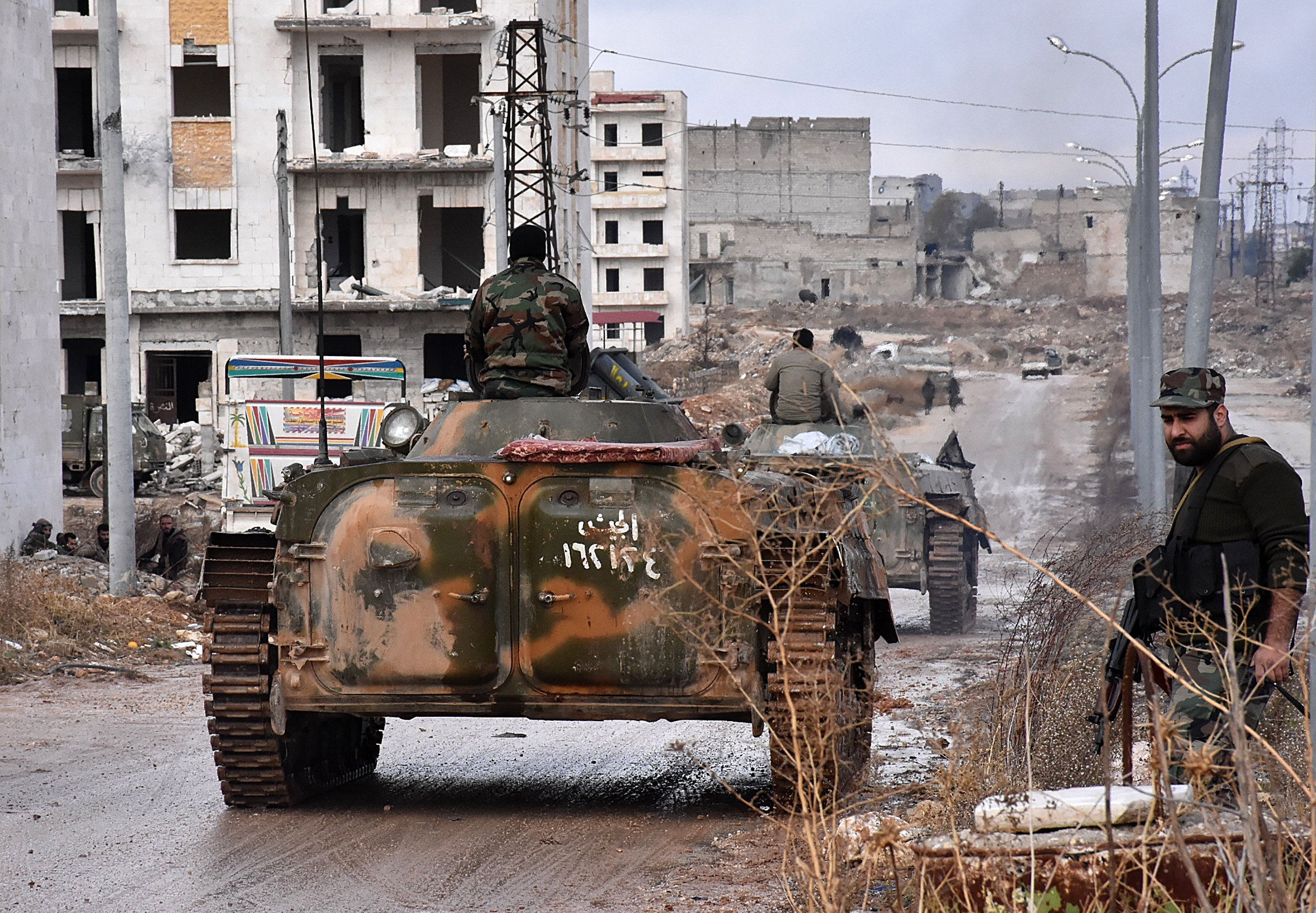 Syrian pro-government forces set up an outpost on December 2, 2016 in the Aleppo’s eastern neighbourhood of Sakan al-Shababi after they retook from rebel fighters

“Armed formations of the Free Syrian Army have fired Hellfire multiple launch rocket systems against Salah al-Din quarter of the Aleppo city and Mortlu in the Latakia province,” the ministry said in a daily bulletin posted on its website.

Press TV however noted that the Syrian army, which is in full control of western Aleppo, is seeking to purge militants from the city’s east, a measure that would “deal a crippling blow to terrorist groups active there.”