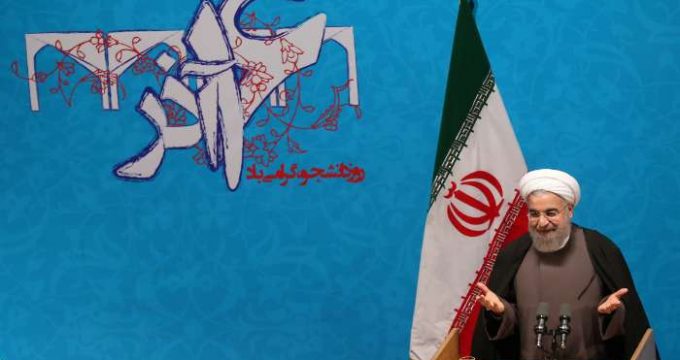 Press TV- Iranian President Hassan Rouhani says a committee tasked with monitoring the implementation of a nuclear agreement with six world powers will on Wednesday decide on how to respond to the US Congress’ recent extension of a piece of anti-Iran legislation.

President Rouhani made the announcement during an address on the occasion of the Student’s Day at the Tehran University on Tuesday.

The deal, dubbed the Joint Comprehensive Plan of Action (JCPOA), involves a total of seven sides, namely Iran, the US, the UK, France, Germany, Russia, and China. It was reached in July 2015.

The deal stipulates that nuclear-related sanctions against Iran be terminated and no such sanctions be imposed as long as Iran meets its side of the bargain, including certain limits to its nuclear program.

Numerous reports by the US administration and the International Atomic Energy Agency (IAEA), which has been tasked with monitoring the technical implementation of the JCPOA, have confirmed Iranian compliance.

However, the US Congress voted recently in favor of extending the US president’s authority to potentially impose sanctions on US entities that do business with Iran.

The passing of the bill, known as the Iran Sanctions Act (ISA), at the US Congress sparked speculation that new sanctions were to be imposed against Iran in what would be a violation of JCPOA’s text.

Iranian officials have described the Congress vote itself as a violation of the deal, too.

The ISA needs the US president’s approval to become law. While the White House has signaled it will sign the ISA, it has said it will use a provision in the bill that allows the waiving of nuclear-related sanctions.

In his Tuesday speech, President Rouhani said, “Even if the US president declares invalid part of the bill ratified at the US Congress, we will react to this level of JCPOA violation that has [already] taken place.”

Other parties to the JCPOA have already warned against unilateral breaches.

The deal has been endorsed by the United Nations Security Council, which means it has become international law. Iran had warned that any breach of the agreement would be confronted.

Elsewhere in his remarks, President Rouhani referred to the election of Donald Trump to the US presidency and said his election will have no impact on the Islamic Republic’s policies.

There has been speculation that the JCPOA may be violated by the US under Trump. While campaigning for office, Trump, who has never served in the government, said he would “tear up” the Iran deal if elected.

Referring to those remarks, President Rouhani said, “Yes, he may desire many things, he may desire to undermine or tear up the JCPOA, [but] will we and our nation allow such a thing?”

“The US,” he said, “cannot influence our determination… [or] the resistance and perseverance of this nation.”