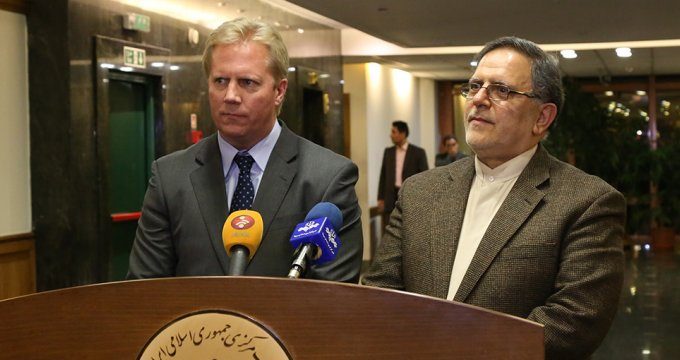 Financial Tribune- New Zealand Trade Minister Todd McClay emphasized the development of business and banking relations with Iran following the lifting of sanctions in January, saying his presence in Iran shows how much his country is eager to speed things up.

“New Zealand has the highest volume of trade in the Middle East with Iran and when the Iranian foreign minister travelled to New Zealand, the capacity of business dealings between the two countries was estimated to reach $1 billion,” McClay was quoted as saying by the official website of the Central Bank of Iran.

“To reach this level of cooperation, business and banking ties between the two countries must pick up and a good understanding must form between the corresponding business sectors,” added the minister in a meeting with Central Bank of Iran Governor Valiollah Seif.

The Kiwi minister said he had relayed to New Zeeland banks the upside of working with Iran in the post-sanctions era.

According to the South Pacific country’s trade minister, Iran is now among countries officially dealing with the New Zealand Export Credit Office.

“The NZECO has now included Iran among the countries it officially does business with and that is telling of the commitment of the New Zealand government to expand ties with Iran,” he said.

“After the suspension of the sanctions, there are now many opportunities to reestablish business ties and many possibilities have been created in the fields of education, construction, food, energy, forestry, production and services.”

At the beginning of the current fiscal year in March, the Export Guarantee Fund of Iran and NZECO signed a memorandum of understanding to cooperate in co-insurance, reinsurance, credit assessment, claims prevention and recovery of debts that help exporters of both countries.

The MoU was signed by New Zealand’s Foreign Minister Murray McCully and his Iranian counterpart Mohammad Javad Zarif during his trip to Wellington.

Noting that he wishes for these meetings to help accelerate bilateral ties, McClay pointed out that this is New Zealand’s first trade mission to Tehran in 12 years.

The day before, the Iran Chamber of Commerce, Industries, Mines and Agriculture hosted McClay and his delegation, which consists of 30 representatives from economic sectors, including agriculture, food, new energies and tourism.

McClay also pointed to the history of links between Iran and his country, noting that the New Zealand Embassy was established in Iran in 1975, which makes Iran the oldest country in the Middle East to have formal relations with New Zealand.