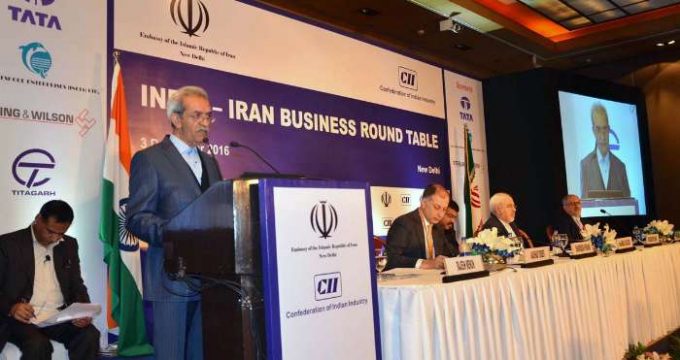 FNA- Chairman of Iran’s Chamber of Commerce, Industries, Mines and Agriculture (ICCIMA) Gholam-Hossein Shafeyee underlined that Tehran and New Delhi are resolved to boost the level of their trade balance to $30 billion in mid-term.

“The current level of trade between the two countries is not satisfactory,” Shafeyee said on Saturday, addressing Iran-India Business Roundtable in New Delhi.

The senior trade official reiterated that Iran has vast energy reserves which can help the country to become a reliable partner for India.

Shafeyee, meantime, said that establishment of an industrial park in the Southeastern Iranian port city of Chabahar will be an effective step towards trade development in Iran-India relations.

India is willing to gain access to Afghanistan and Central Asian Countries via Chabahar Port.

In May, Tehran, New Delhi and Afghanistan signed an epoch-making agreement in Tehran to establish a transit and transportation corridor.

The agreement known as Chabahar Trilateral Agreement was signed by the three countries’ officials in the presence of Iranian President Hassan Rouhani, his Afghan counterpart Mohammad Ashraf Ghani and Indian Prime Minister Narendra Modi in Tehran.

The trilateral Chabahar agreement will considerably increase making use of Chabahar port that will connect India to Central Asia through Afghanistan and instead will provide Afghanistan’s access to India via sea.