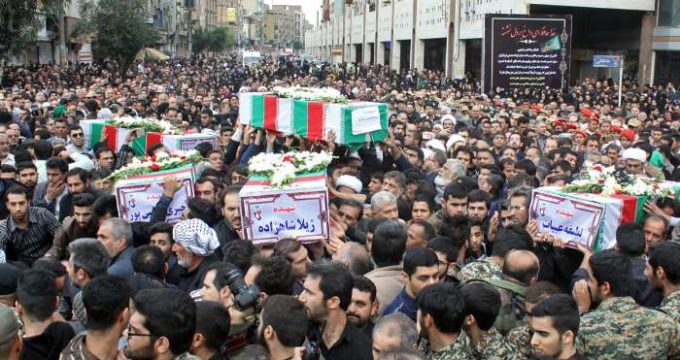 Press TV- As many as 37 of the Iranian martyrs of a massive bombing, which targeted pilgrims near the Iraqi capital of Baghdad earlier in the month, have been laid to rest following a funeral procession in southern Iran.

On November 24, explosives laden onto a truck were set off at a gas station in the Shomali village in the suburbs of the city of al-Hilla, located 120 kilometers southeast of the Iraqi capital and around 80 kilometers (50 miles) from the country’s holy city of Karbala.

A total of 52 Iranians lost their lives in the terrorist attack that killed over 100 people and injured scores of others. The attack has been claimed by the Takfiri terror group of Daesh.

On Wednesday, large numbers of people took part in the processions held in the southern Iranian city of Ahvaz.

The victims were buried at three cemeteries in the city as the event came to a close.

Separately, another funeral procession took place in the northwestern city of Tabriz for two victims, who had lost their lives during a November 26 train accident.

The incident, which happened in the north-central province of Semnan, saw two passenger trains colliding at a station, killing a total of 45 people and injuring 103 more.

The funeral ceremonies were held as Iranians across the country are marking the martyrdom anniversary of Imam Reza, the eighth Shia Imam.