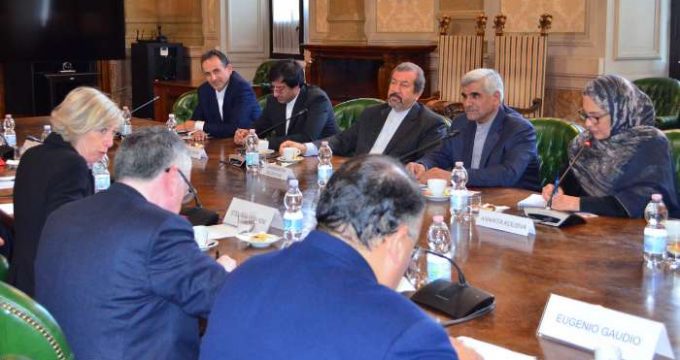 MNA – Iran’s Mohammad Farhadi has visited Italy’s Stefania Giannini Minister of Education, Universities and Research in attempts to broaden cooperation between universities of both countries.

Mr. Farhadi’s entourage was received by Mrs. Giannini on Tuesday in the ministry venue in Rome. They discussed possibilities of implementation of a science and technology accord signed in last April in Tehran.

Mr. Farhadi told Iran’s state news agency IRNA after the meeting that a joint commission would address and watch over the implementation of the accord; “an article of the accord allows Iranian PhD students to seek 6- and 9-month fellowships in Italian universities; it also defines joint research projects, some of which have been completed and some others are on agenda,” he told IRNA.

“An Italian delegation would visit Tehran in upcoming months, where we agreed to provide workshops in art, archaeology, and architecture; a joint fund would also finance tech companies and Science and Technology Parks in both countries,” said the minister.

Mrs. Giannini who was hosting the meeting, voiced his fellow country’s strong resolve to extend ties with Tehran especially in university matters which encompassed among others, “physics and medicine and diverse field as restoration works on historical monuments.”