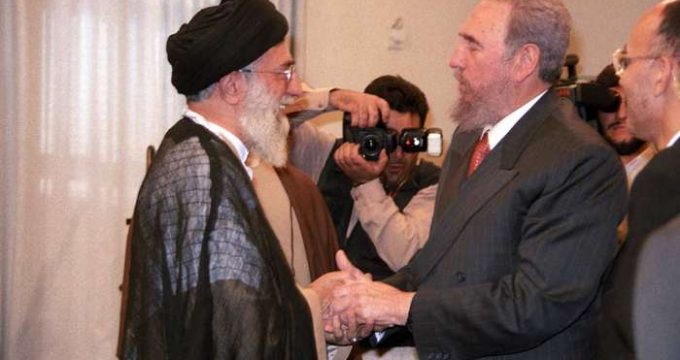 In memory of Fidel Castro, a friend of Iran

Iranian Diplomacy|Kaveh L. Afrasiabi: Fidel Castro, the iconic leader of the Cuban revolution and a giant of post-WWII global politics, was a true friend of the Iranian people and an avid admirer of the Islamic Revolution, who like Iran’s spiritual leader, Ayatollah Ruhallah Khomeini, was credited with chasing a corrupt US-backed dictator out of his country and for over a half century was a constant thorn in the side of US.  Fidel put the resources of his nation in the service of liberation struggles around the world, especially Africa, and was admired by the late Nelson Mandela for his tireless efforts against Apartheid.

Iran’s President Hassan Rouhani, who met the ailing Castro at his residence in Havana recently, aptly described the common ground of Iran and Cuba as symbols of resistance to coercive Western sanctions and hegemony.  Indeed, the list of commonalities between the two countries is a long one: both have led the Non-Aligned Movement, have confronted US interventionism and Washington’s “roll back” strategy and have also dealt with similar tragedies, like the terrorist downing of a Cuban passenger airplane similar to the Iranian plane that was shot down in cold-blood by an American missile. And while Cuba had to deal with the CIA-engineered Bay of Pigs invasion, Iran has had the similar US infiltration that was shut down by the sandstorm in Tabas.   But, above all, the thread of solidarity running between Havana and Tehran is cemented forever by the heroic resistance of both nations against decades of coercive sanctions, which in Cuba’s case meant a total blockade that has only been partially lifted as a result of the recent diplomatic detente between Havana and Washington.

How will history judge a man who in his own trial as a young revolutionary confidently asserted that history will absolve him?  History is, of course, often written by the victorious powers and, therefore, it is hardly surprising that Western historiography on Castro and his revolution is largely negative, focusing on the shortcomings of his rule, the human rights violations, the Cuban dependency on Soviet Union etc.  Alternatively, Cuban history seen through the prism of Third World nations presents a glowing image of Fidel as a brave nationalist who dedicated his whole life to various Third World causes and whose turn to Moscow’s assistance began after the American embargo and refusal to buy Cuban sugar, aiming to cripple the young post-revolutionary political order at its infancy.

We can safely assume that if Washington had not engaged in a thousand shades of conspiracy against the Cuban revolution, such as by plotting to assassinate Castro dozens of times and sponsoring a proxy invasion of Cuba under JFK’s watch in 1961, then chances are the Cuban democracy would not be subjected to the limitations of an state of emergency that gripped the island nation for decades.  Intent on safeguarding the social, political, and economic human rights of Cuban people striving for self-sovereignty and independence, Castro, who nationalized the US-owned companies, earned the volcanic wrath of Uncle Sam that not only failed to dislodge him but also saw the replication of Cuban revolution in a number of Central and Latin American countries such as Nicaragua and Venezuela.  The struggle for the hemisphere’s independence, which began with Jose Marti two centuries ago, is still on-going and experiencing the tumults of changing times.

Like Mandela, Cabral, Lumumba, Che, and other Third World revolutionaries, Fidel will be always remembered as a larger-than-life charismatic leader who empowered his nation and raised their stature in world affairs, irrespective of the various flaws of the Cuban revolution, many of which were imposed from the without — by an intrusive Western superpower.