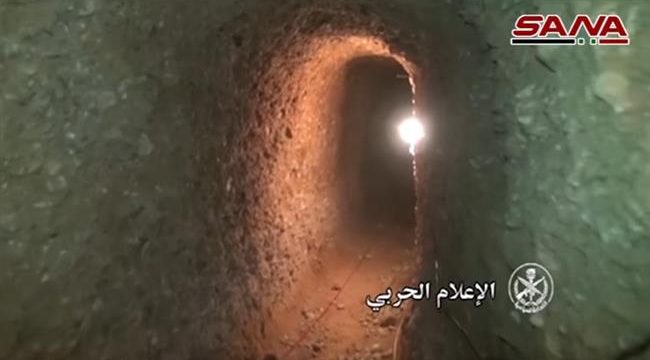 Press TV- Syrian government forces have discovered and destroyed a long tunnel burrowed deep underground and used by foreign-sponsored Takfiri militants during a counter-terrorism operation on the outskirts of the capital, Damascus.

The sources added that terrorists with the so-called Jaysh al-Islam, formerly known as Liwa al-Islam, group used the tunnel to transfer militants in addition to ammunition, and infiltrate into government-held areas.

The Syrian army’s engineering units later placed explosives inside the tunnel, destroying it and all militants’ structure built above it.

Meanwhile, a Syrian army official has revealed that five Takfiri terrorists wounded during fierce exchanges of fire with Syrian government forces have been transferred to several Israeli hospitals and are receiving medical treatment there.

The official said the Tawhid al-Janoub Brigade militants sustained gunshot wounds in the course of clashes with Syrian army troopers in the Dara’a al-Balad district of the southwestern city of Dara’a, located about 90 kilometers south of Damascus, on Thursday.

More than 10 terrorists were also killed and their vehicles destroyed.

Separately, Syrian soldiers managed to establish full control over Hananu neighborhood in the eastern quarter of the strategically northwestern city of Aleppo, located some 355 kilometers north of the capital, on Friday, following several days of fierce firefights with Takfiris there.

Hananu used to serve as a major stronghold of militant groups in eastern Aleppo since 2012, and militants used the region to launch attacks against areas under the control of government forces in the divided city.

The conflict in Syria, which flared up in March 2011, has claimed the lives of more than 400,000 people, according to an estimate by UN Special Envoy for Syria Staffan de Mistura.