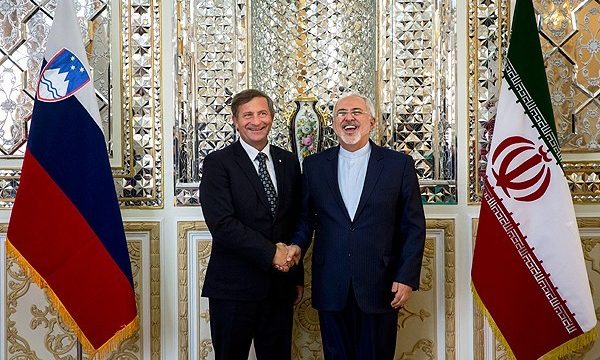 IRNA – Foreign Minister Mohammad Javad Zarif said on Wednesday that terrorism and extremism are common concerns of the region and world, requiring comprehensive campaign from cultural and intellectual job to military undertaking.

He made the remarks in a meeting with his Slovenian counterpart, Karl Erjavec, and his accompanying delegation.

Describing presence of Slovenian President Borut Pahor and senior officials in Iran as a positive step and good prelude for new period for bilateral ties, Zarif said that there are numerous capacities for promoting cooperation.

Zarif listed energy, financial and banking, tourism, visa facilities and culture as suitable areas of cooperation, saying, ‘We have common viewpoints and concerns in regional and international developments.’

Erjavec, for his part, expressed pleasure with his visit to Tehran, saying a new chapter has opened in Iran-Slovenia ties.

He said that Iran-Slovenia Joint Economic Commission will be held in Ljubljana in 2017, adding that the Slovenian job generators and businessmen are very interested in cooperation with Iran’s state-run and private sectors.

Iran as a regional power plays a positive role in regional developments, he said.

‘No doubt that our strategic interests lies in a stable and secure world and that’s for the same reason that a stable Iraq and Syria are vital for the world.’

He also called for regular consultations between officials of the two countries’ foreign ministries.