A Look at Iranian Newspaper Front Pages on November 23

Iran Front Page- The majority of newspapers today covered the ongoing visit of Slovenian President Borut Pahor to Iran and his meetings with the Leader of the Islamic Revolution Ayatollah Seyyed Ali Khamenei and President Hassan Rouhani.

They also continued covering the reactions to the cancellation of Parliament Vice-Speaker Ali Motahari’s speech in Mashhad.

The US President-elect Donald Trump’s opposition to the nuclear deal with Iran also remained a top story, with several articles and developments covered about it today.

1- President Says Slovenian Embassy in Tehran Will Be Reopened

2- Rouhani: Iran Is Resolved to Expand Its Ties with Friendly Countries, Particularly in EU 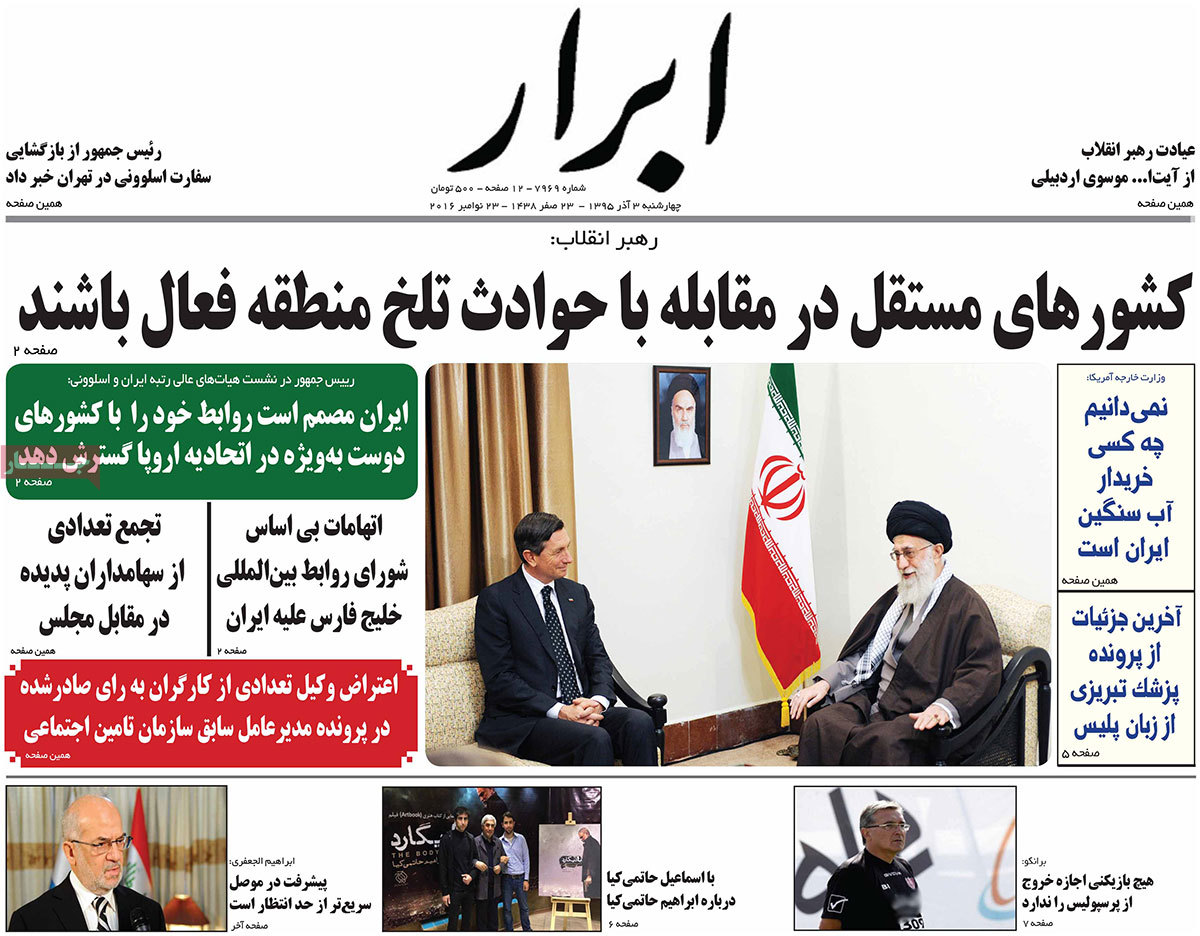 4- Industrial Investment in Iran Has Been Doubled 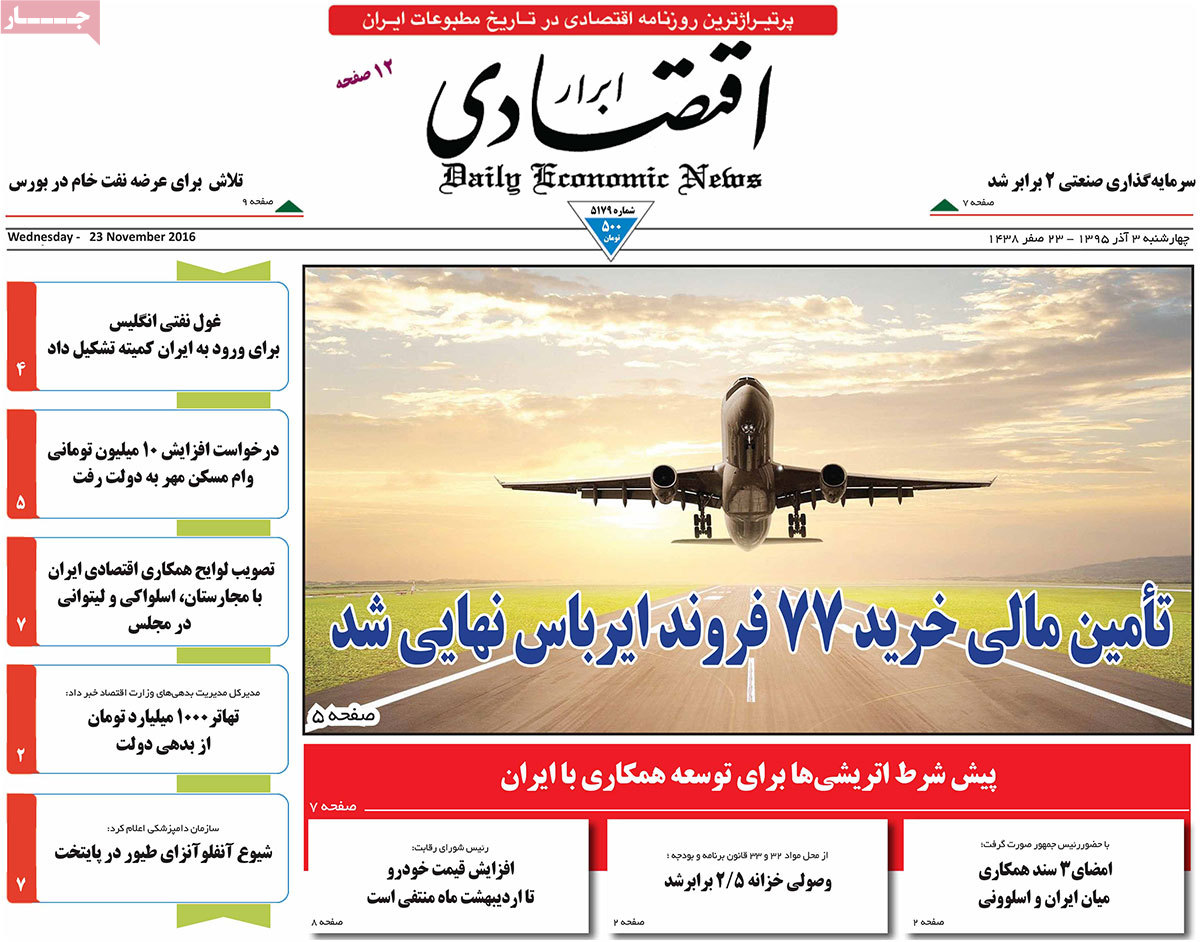 1- Iran’s Nuclear Chief: Letter Was Received from Other Side for Purchase of Iran’s Heavy Water; Iran Has Exported 11 Tons of Heavy Water to Oman 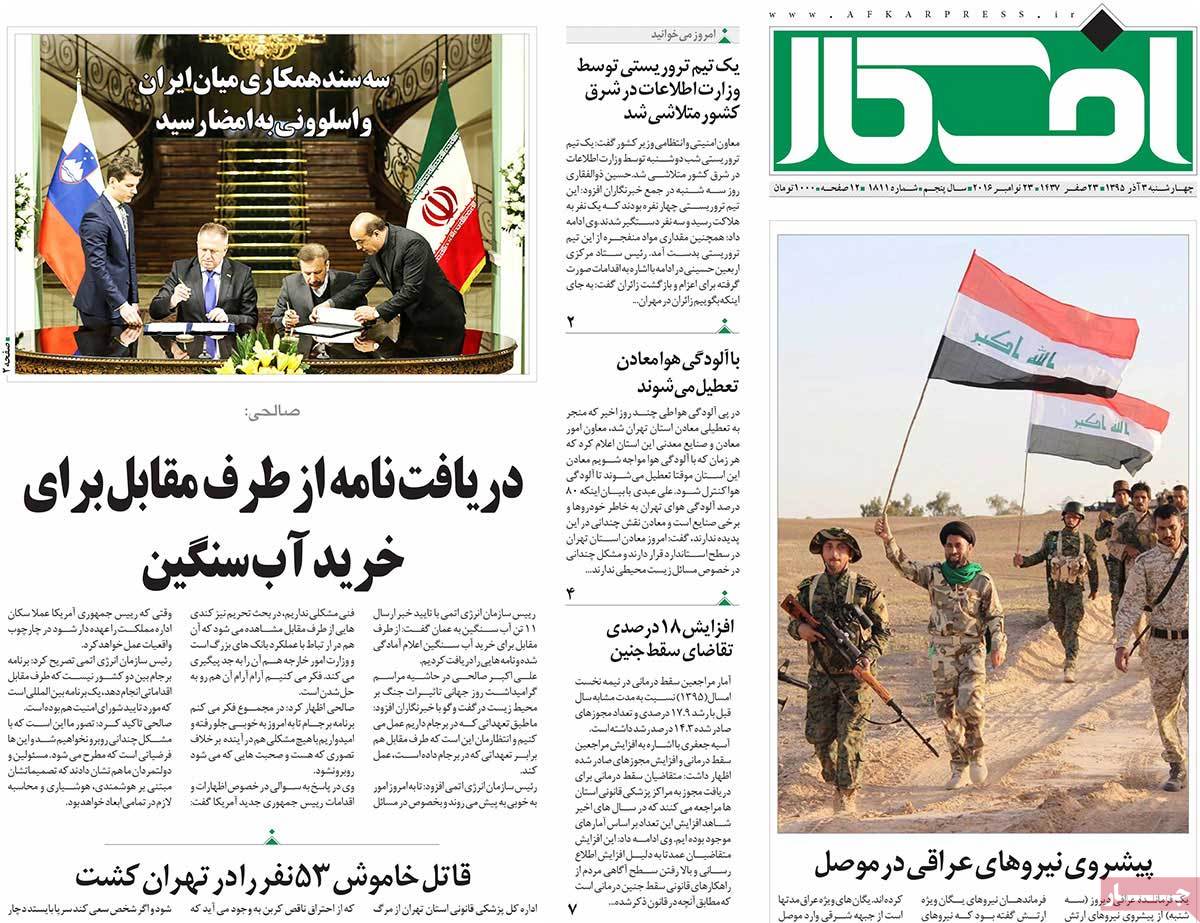 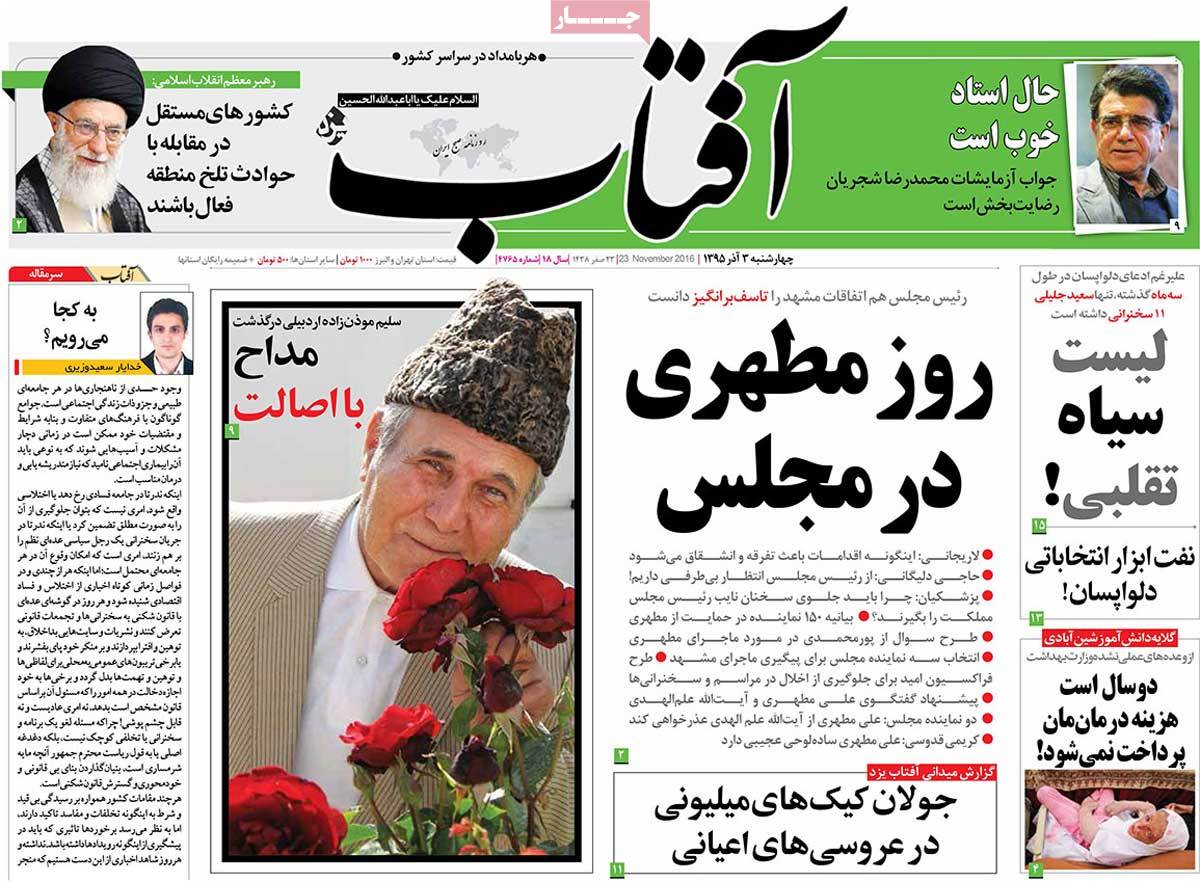 1- Leader: US Has No Plan for Eradication of ISIS

3- Trump Announces Plan for First 100 Days: No Talks of Cancelling or Revising JCPOA 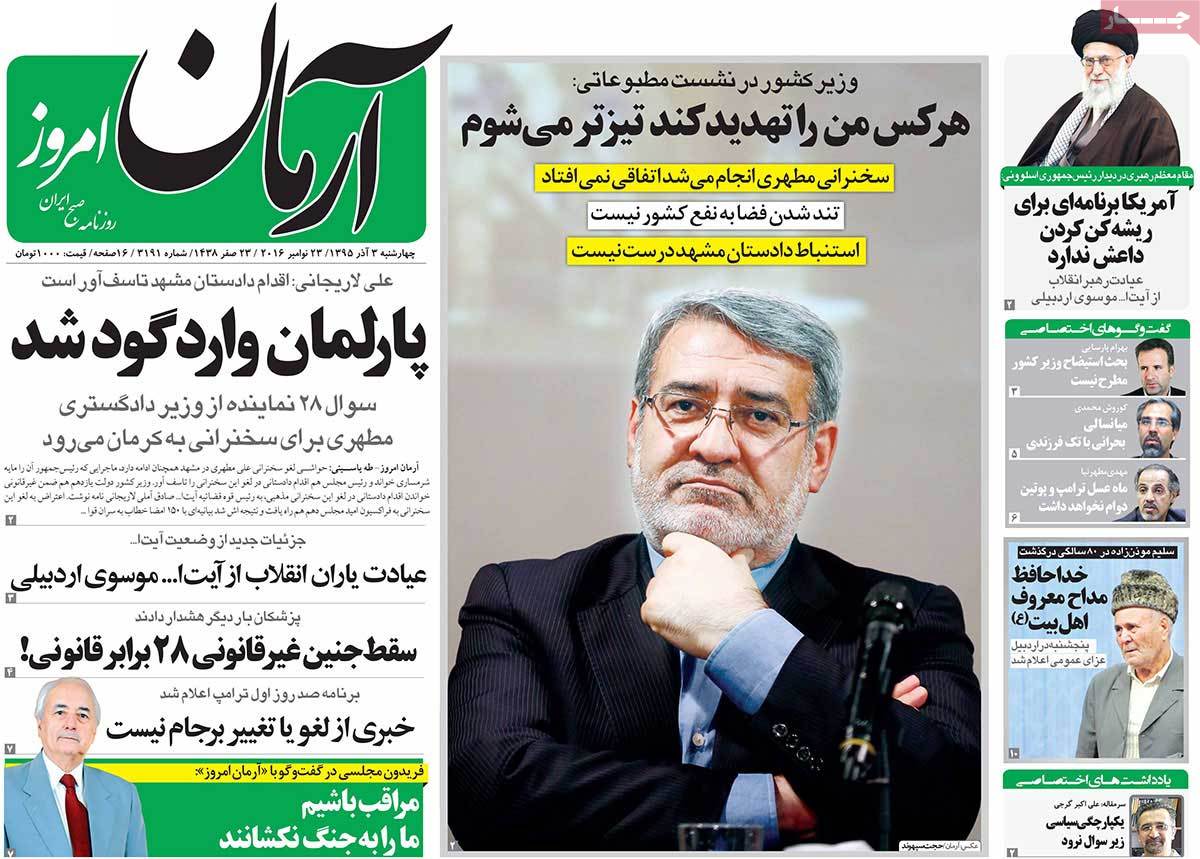 1- Deal for Purchase of 112 Airbus Planes Is Finalized 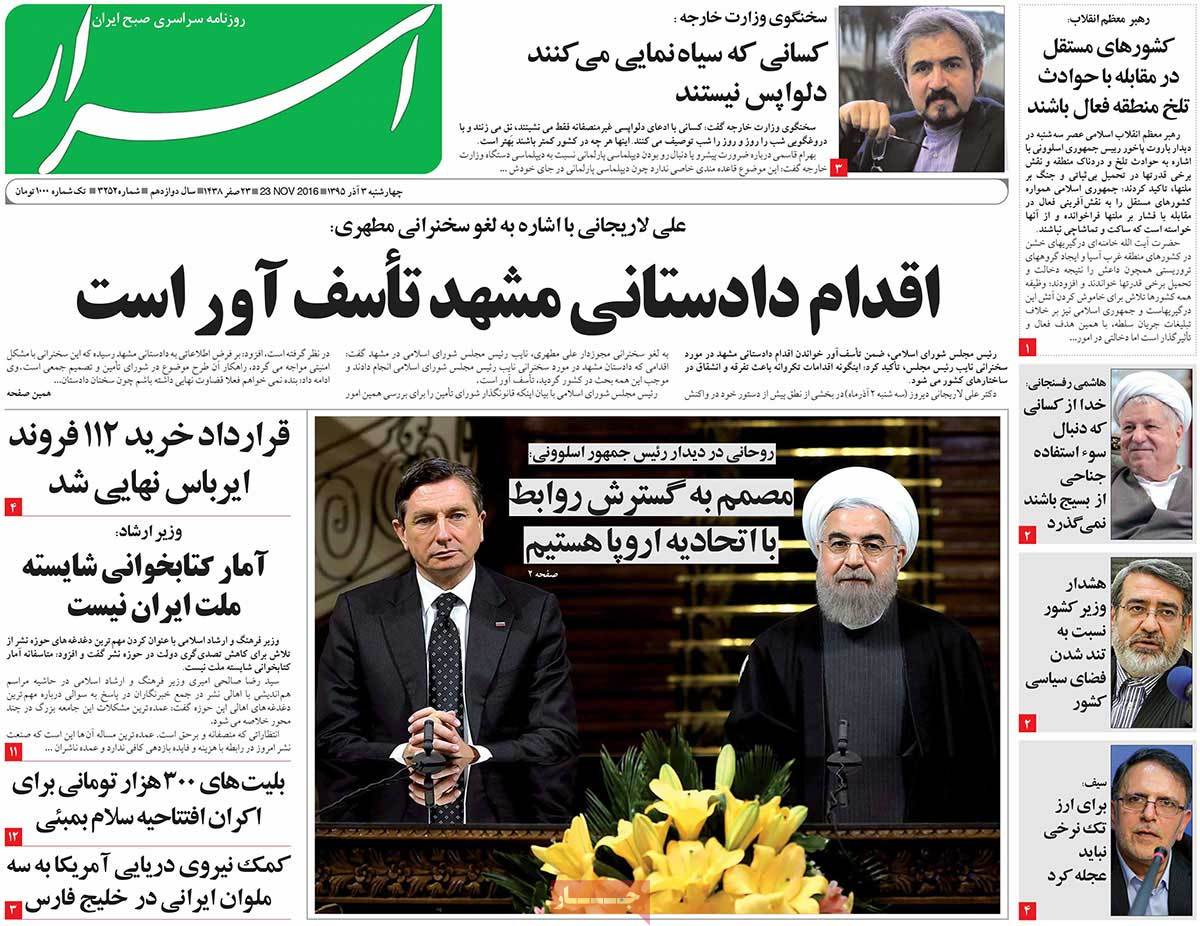 1- Sociologist Explains Why Government Has Become Inefficient: We Have Three Governments in Iran at the Same Time; Government Only Has 30% of the Country’s economy in Its Hands, It Cannot Reform It 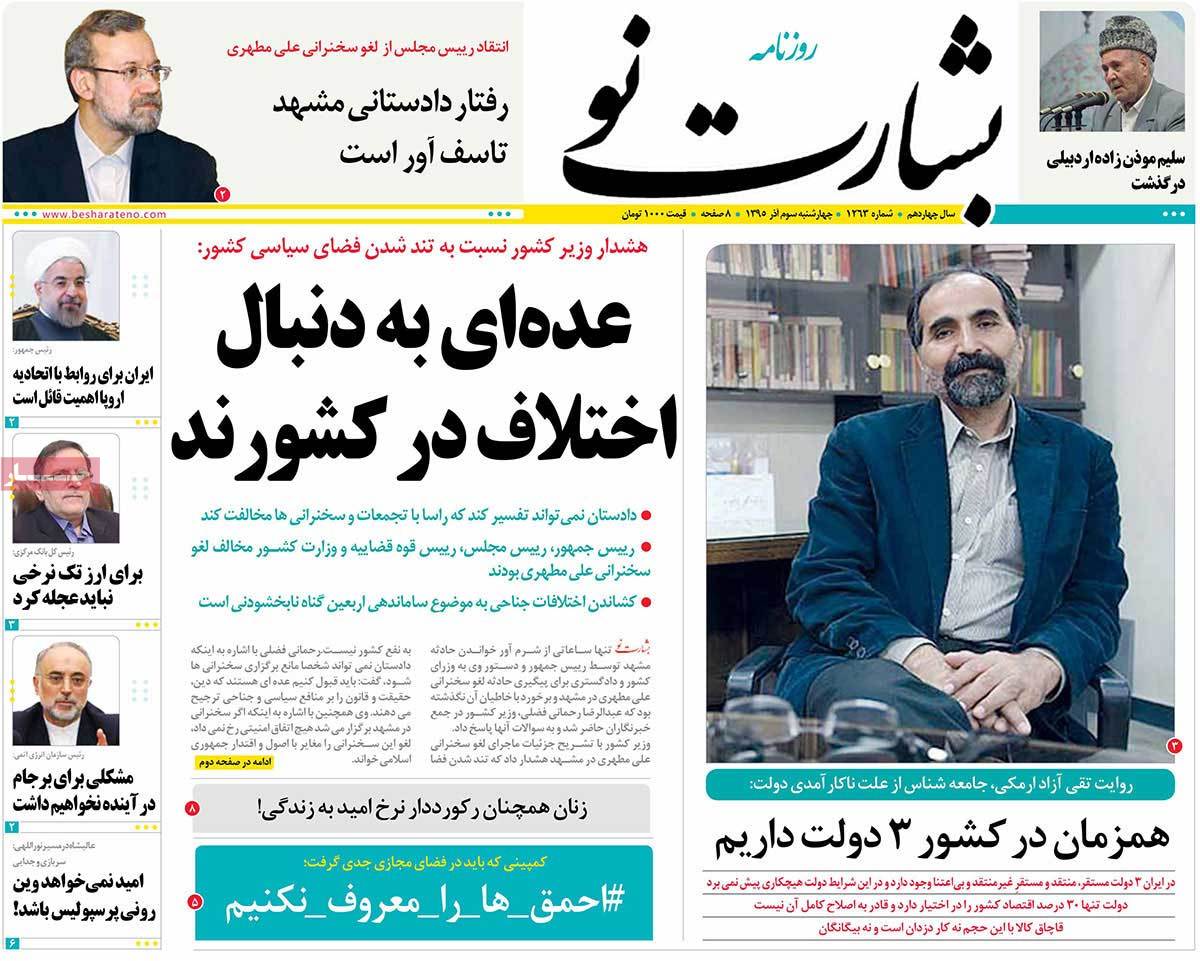 1- Renovation of OPEC in High-Ranking Committee 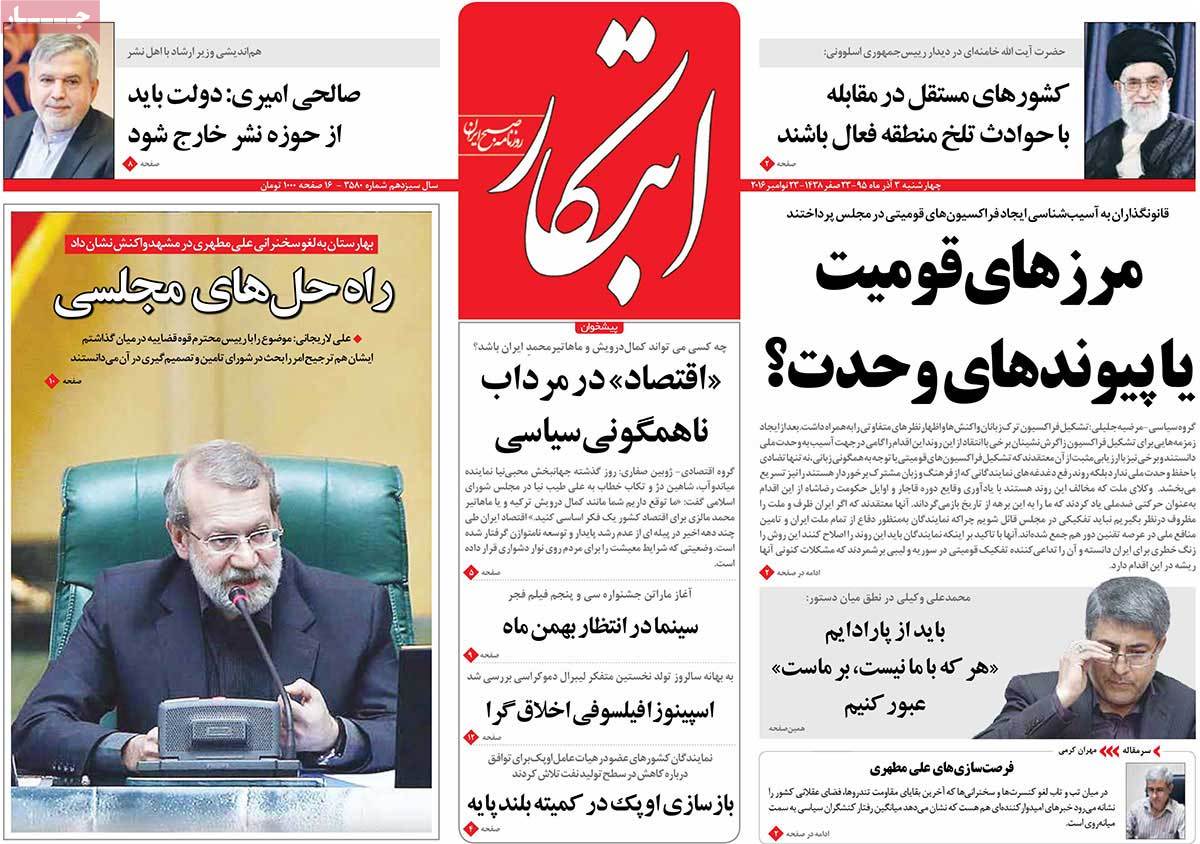 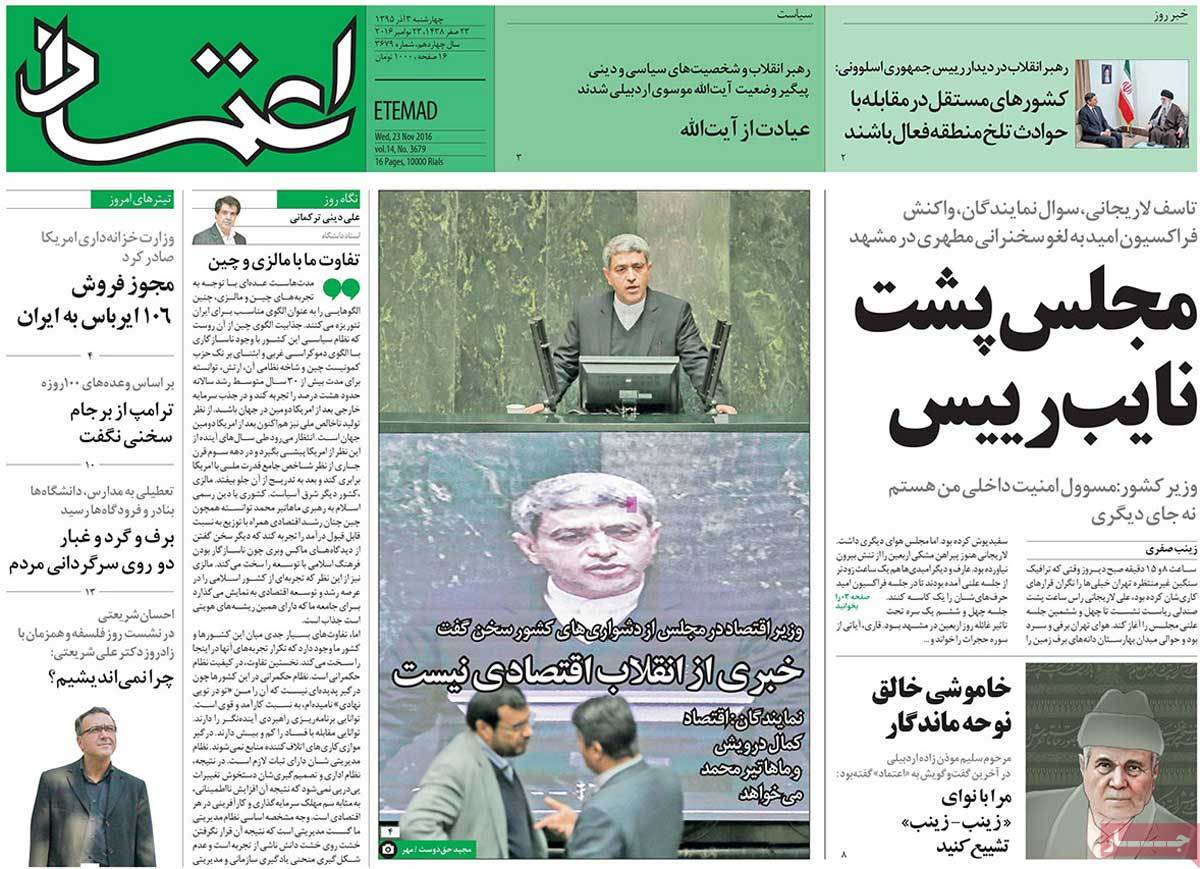 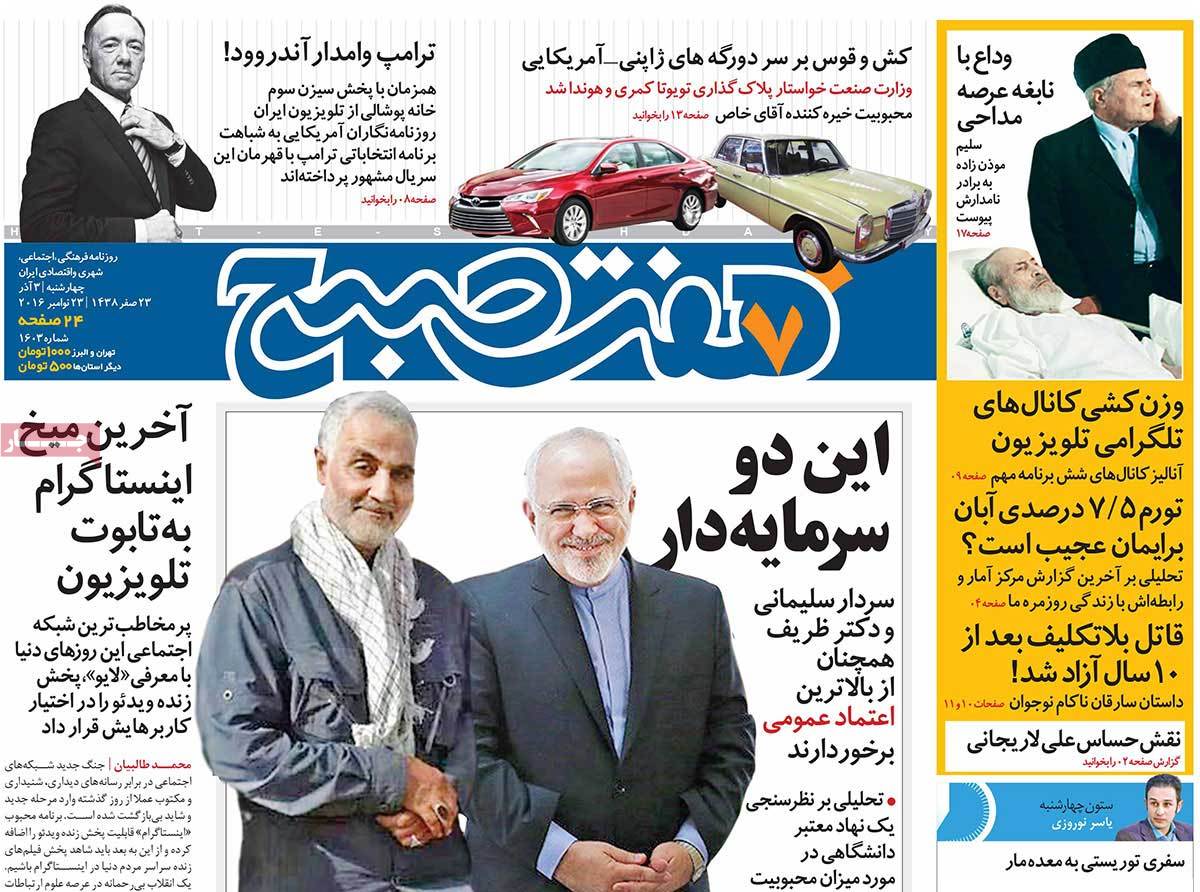 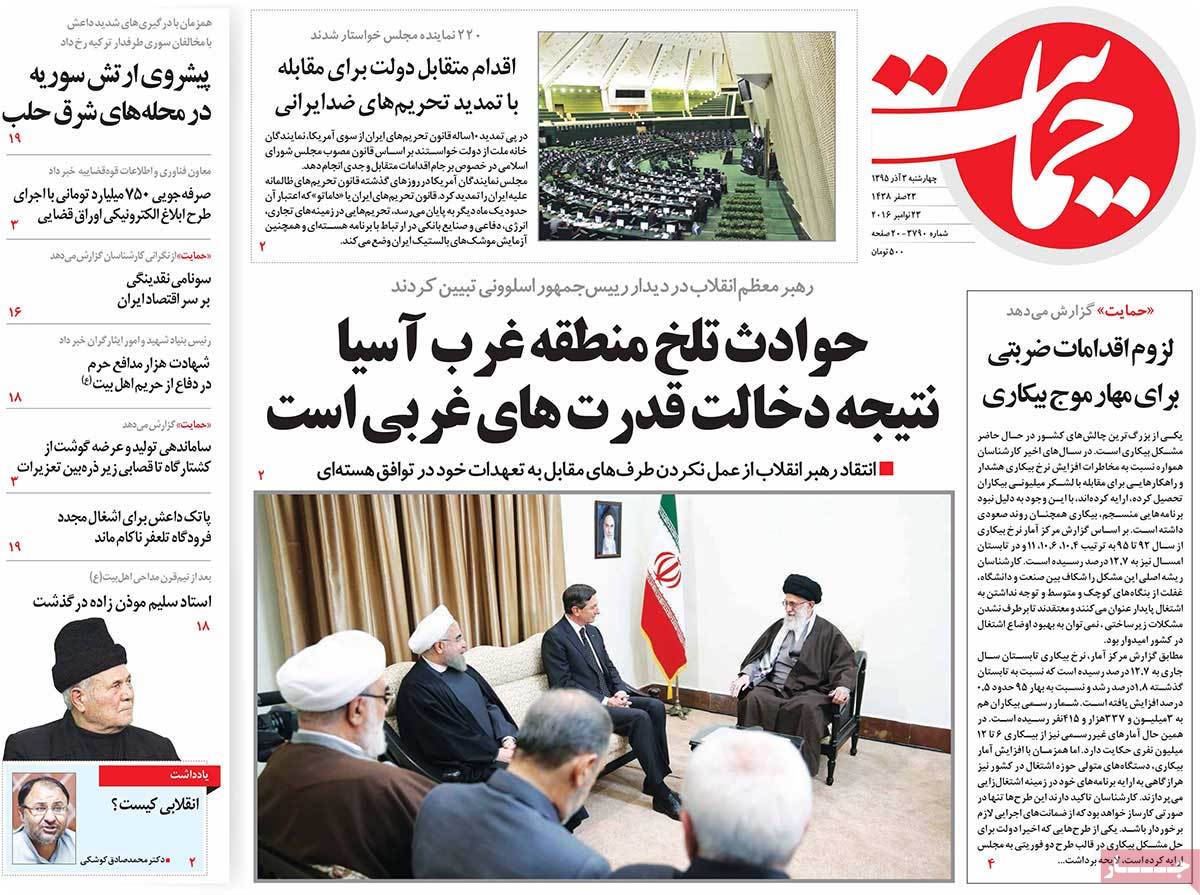 1- Rouhani and Slovenian Counterpart: Iran and Europe Seek to Use Post-JCPOA Opportunities 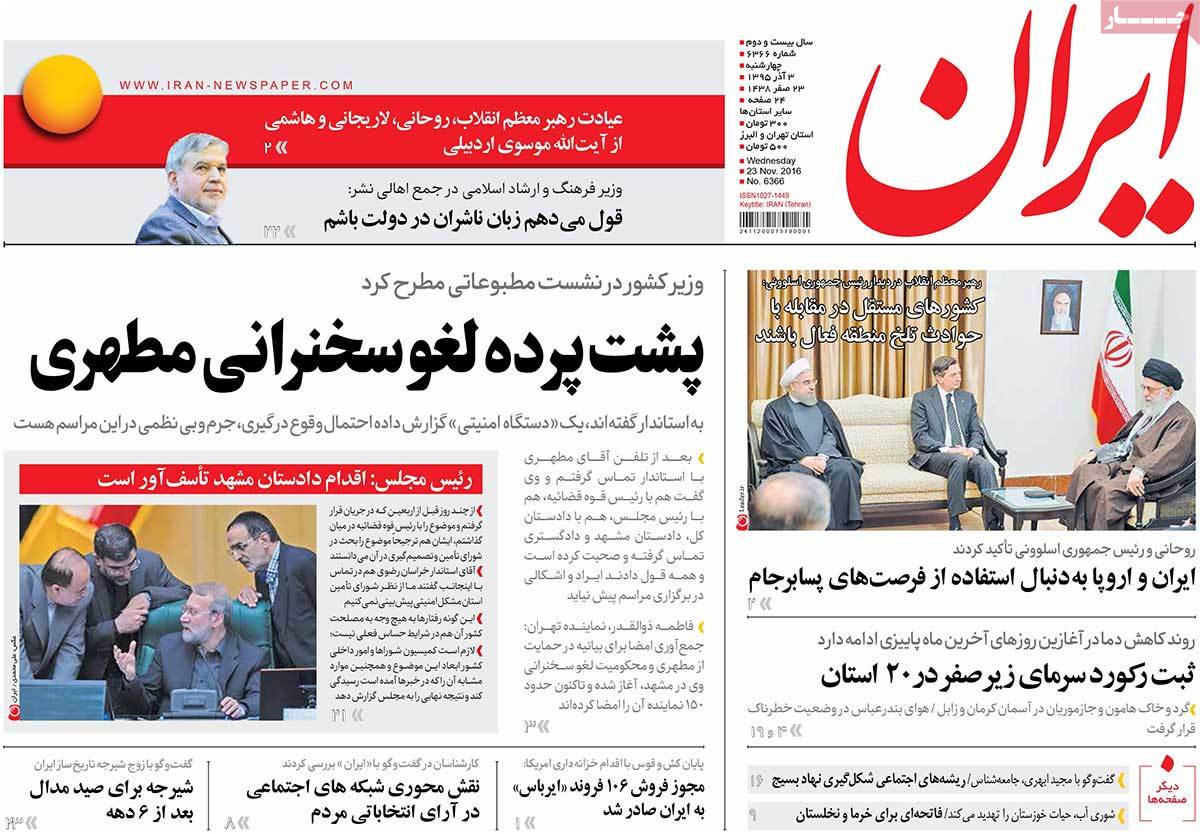 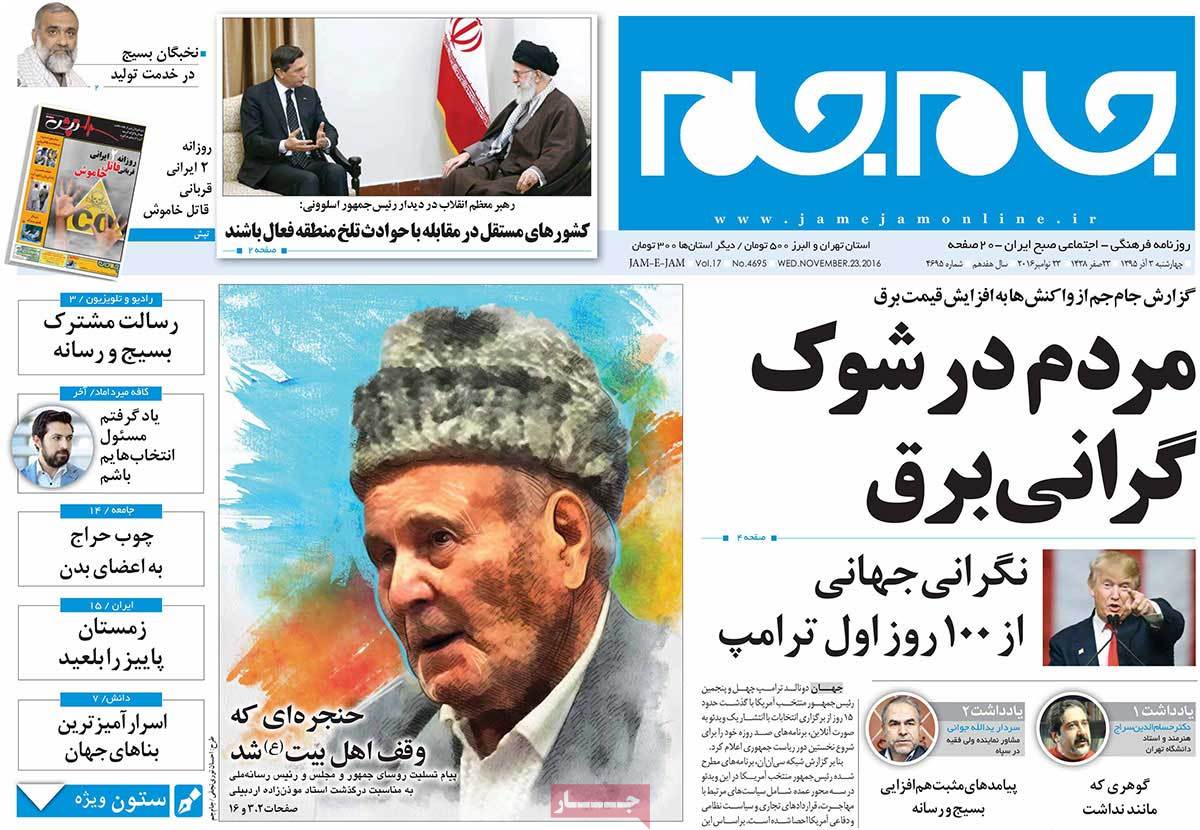 1- 50 Plans in US for Countering Nuclear Deal; Iran’s Parliament Speaker: Leader Repeatedly Warned that We Can’t Rely on Them and Their Promises 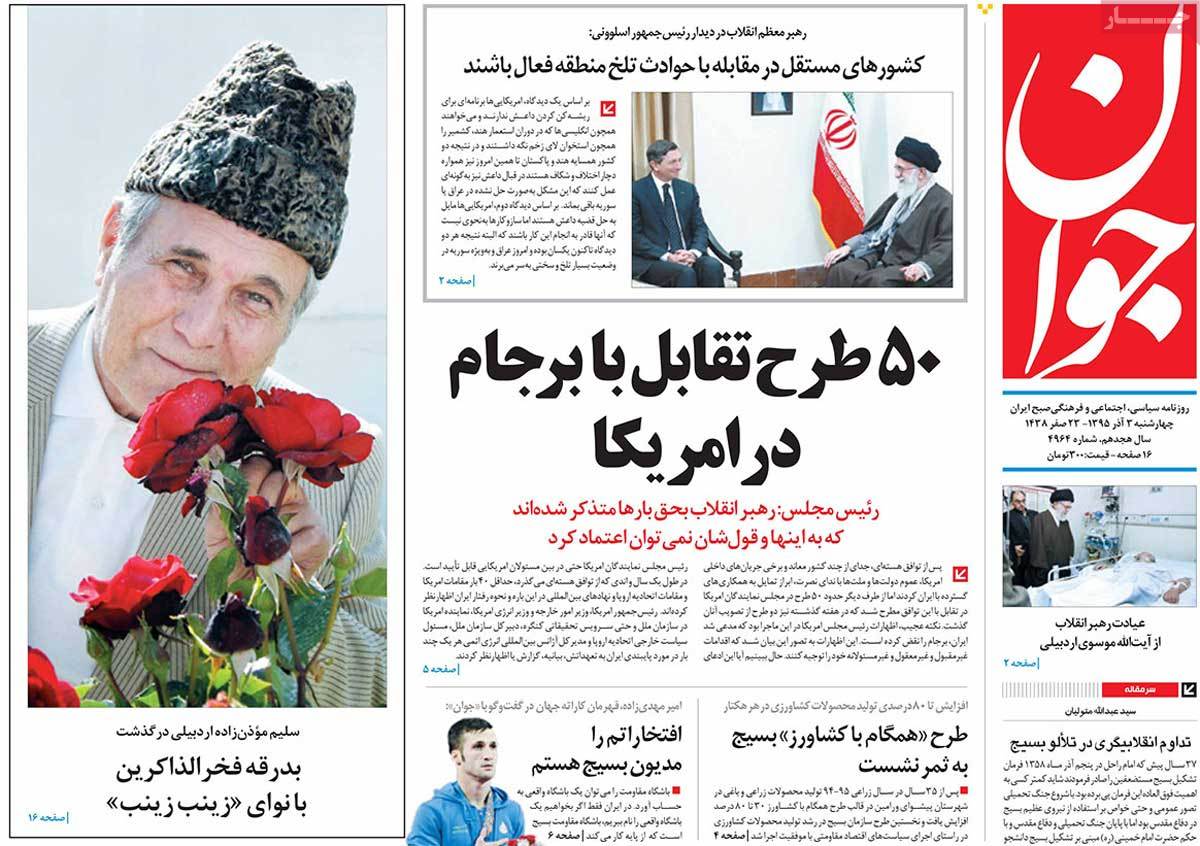 1- Leader: Violent Conflicts in Western Asia and Emergence of Such Terrorist Groups as ISIS Are Results of Interference and Imposition of the Will by Certain Powers 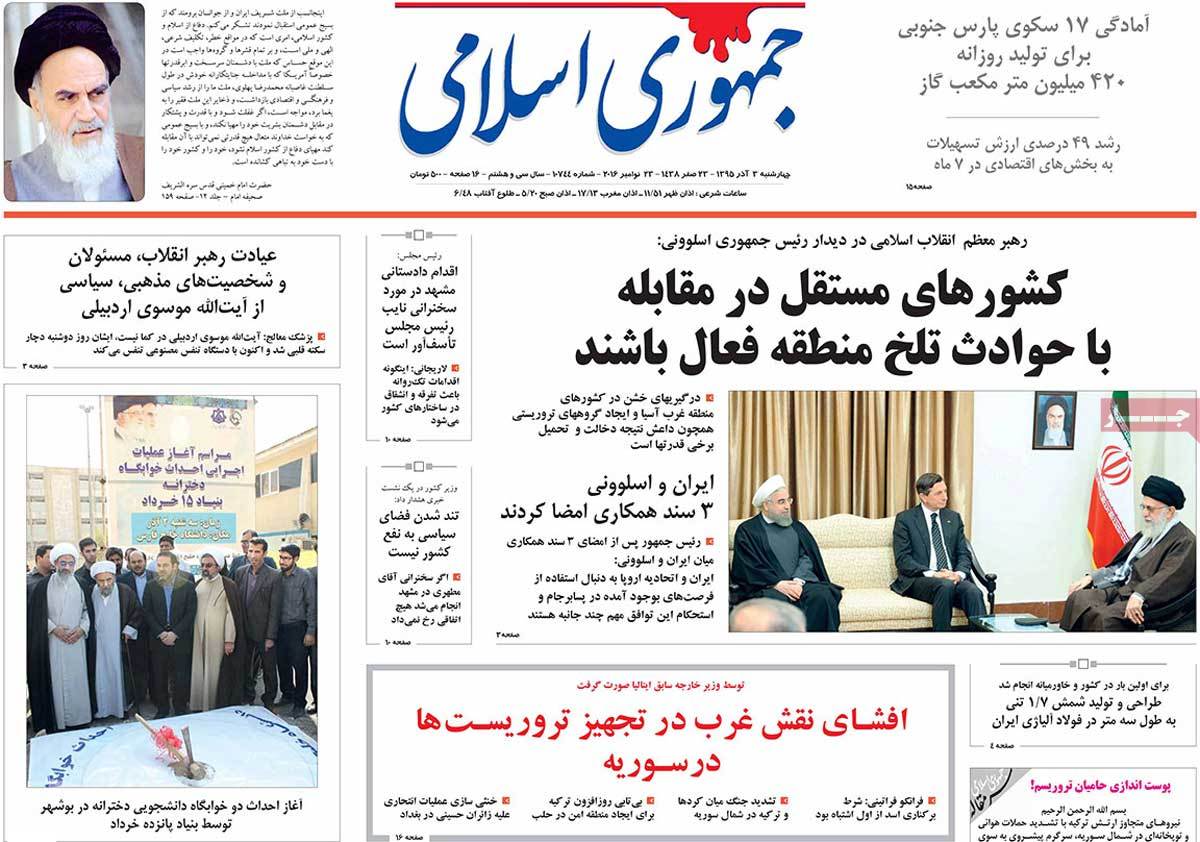 1- Leader: US Either Doesn’t Want to Fight ISIS or It Can’t Do So

2- Which One’s Embarrassing: Cancellation of Speech or the Fact that Rouhani’s Government Has Done Nothing?

3- People’s Cooperation with Armed Forces, the Secret behind Army’s Amazing Progress in Mosul 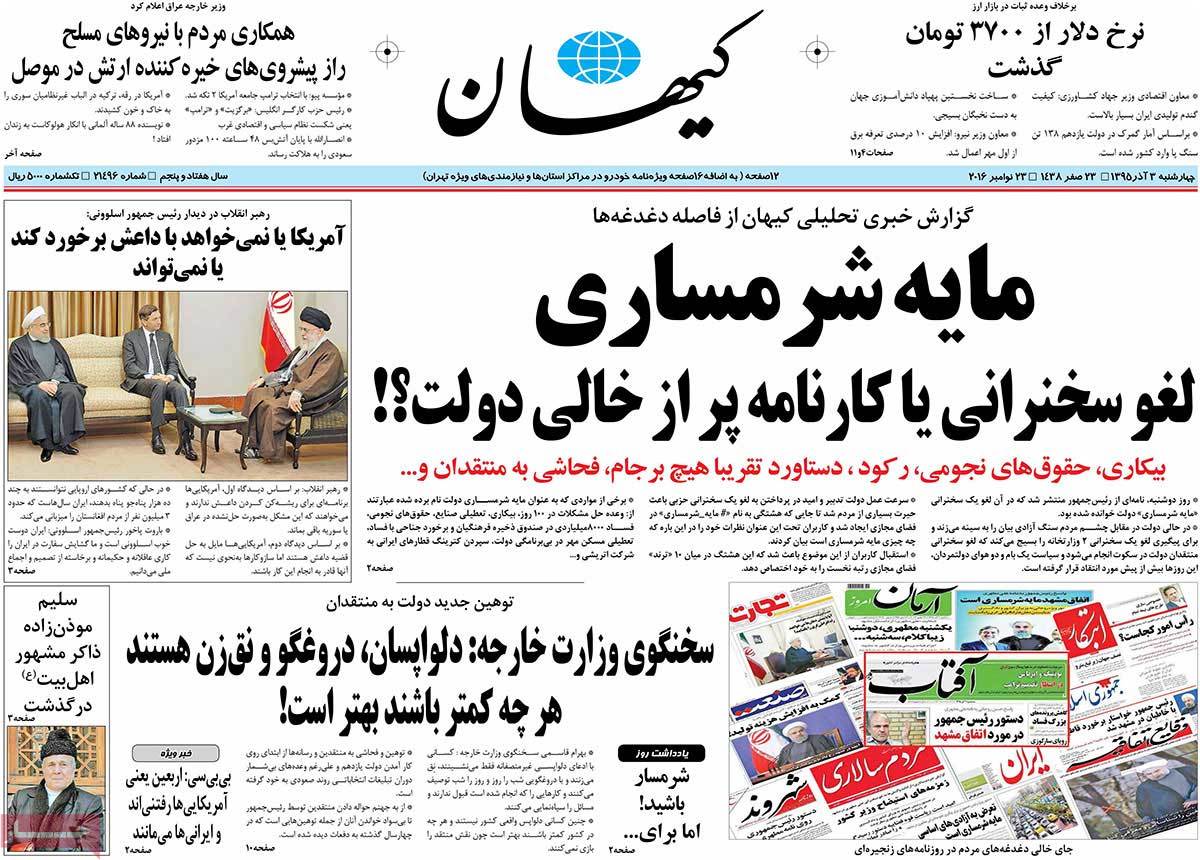 1- Leader: US Wants to Keep ISIS like an Open Woundl European Countries Failed to Give Asylum to Thousands of Refugees, But Iran Is Now Hosting 3 Million Asylum-Seekers

2- US Starts Breaking Its Promises in Int’l Accords: Trump Says US Will Exit Trans-Pacific Partnership; Japanese PM Says TPP Is Meaningless without US 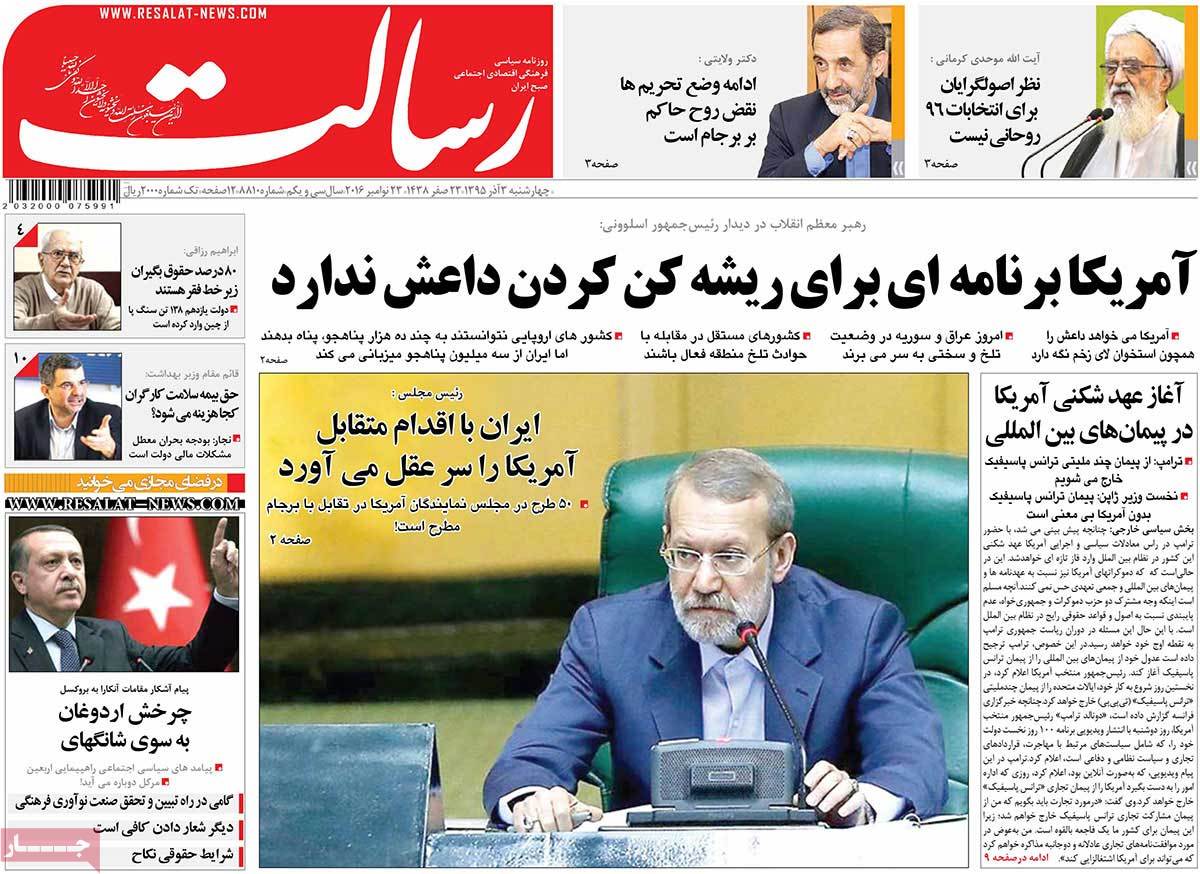 1- Renovation of Ties in a Snowy Day: Iran’s President Meets His Slovenian Counterpart; Ljubljana’s Embassy in Tehran to Be Reopened after 4 Years

2- Airbus’ Trade Delegation Is in Tehran 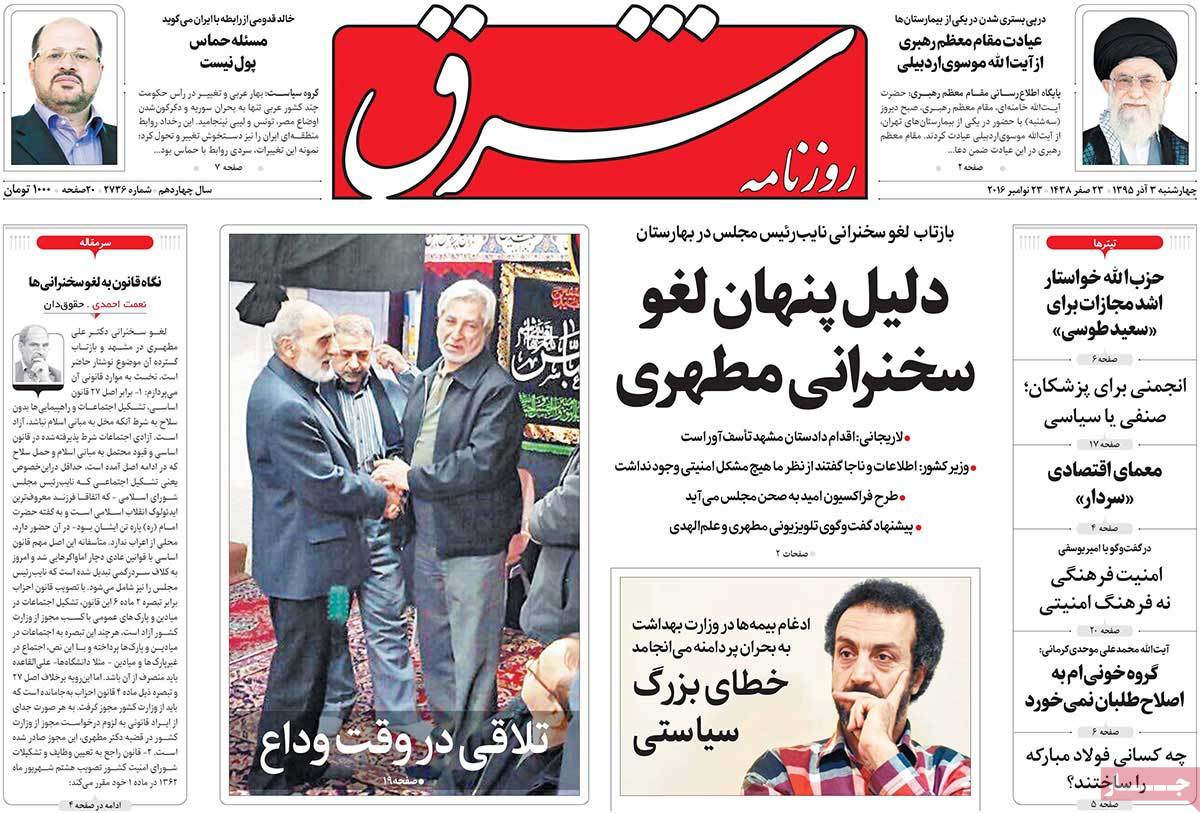 1- Trump to American Media: You’re Liars! US President-Elect to CNN Chief: I Hate You! You’re All Liars! Shame on You! 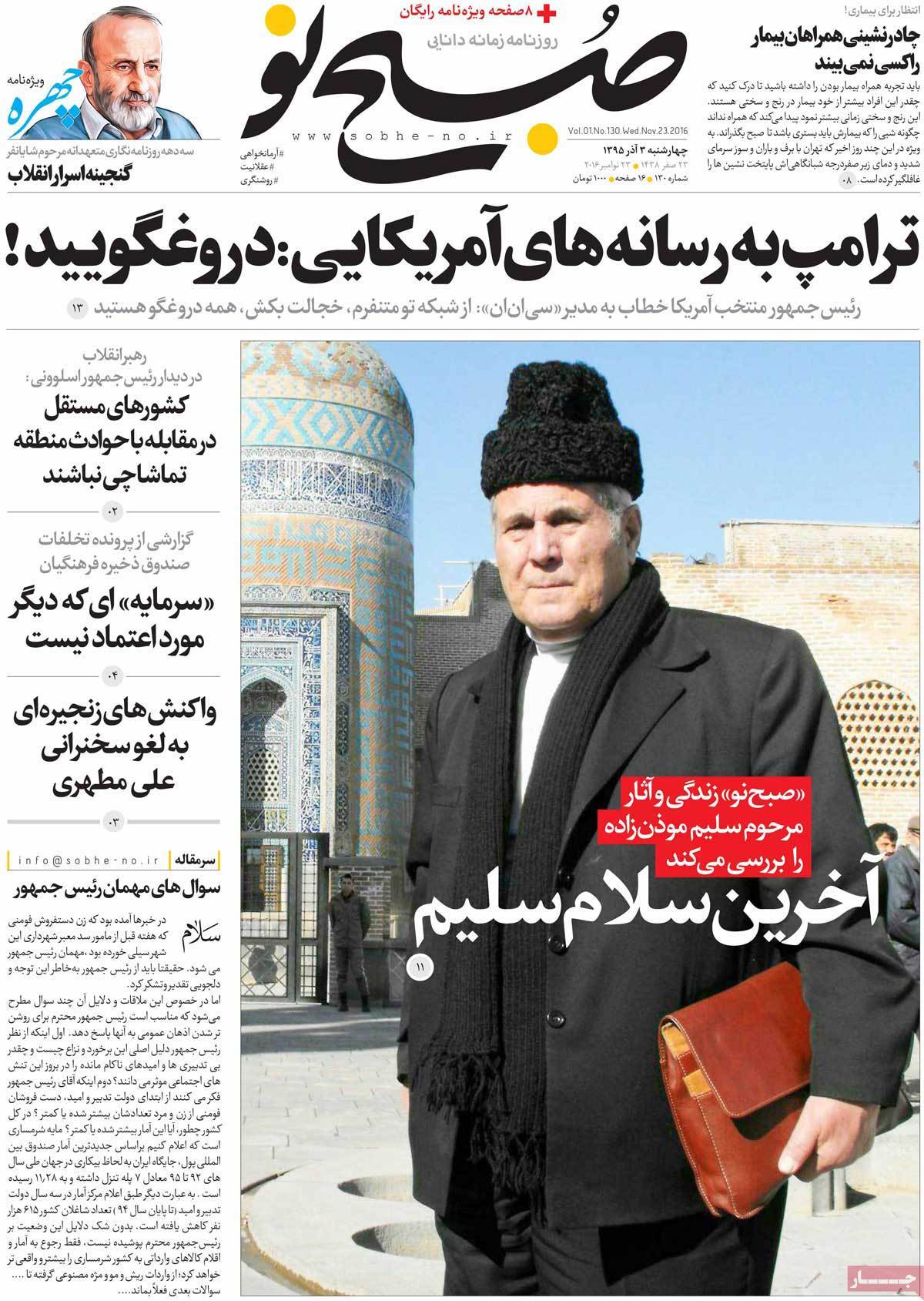 1- Shooting the Nature: A Look at the Impact of War on Dust Crisis on International Day of “Environment in War”

2- Environment Chief: ISIS’ Attack on a Big Sulphur Warehouse near Mosul Caused a Sulphur Blooming that Could Lead to Acid Rain in Iran

3- Iran’s Nuclear Chief: There’s a Relationship between War and Environment 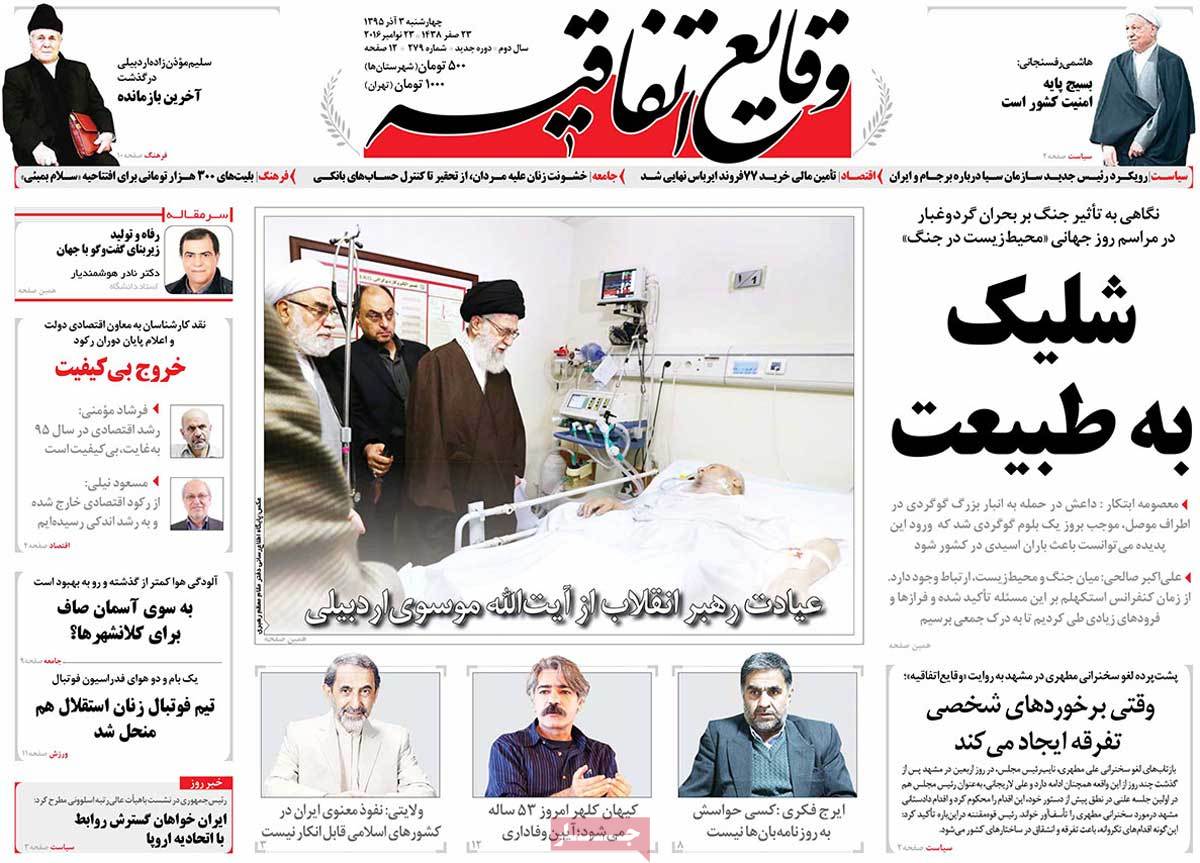