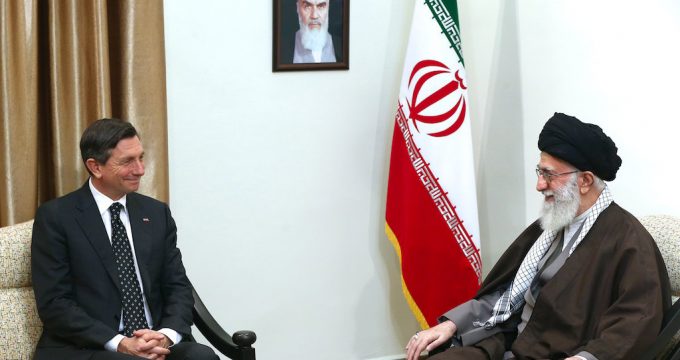 Press TV- Leader of the Islamic Revolution Ayatollah Seyyed Ali Khamenei says the so-called international coalition led by the United States and formed allegedly to fight the Daesh terrorist group has not been successful.

“Based on one standpoint, the Americans have no plan to uproot Daesh… and seek to act in such a way vis-à-vis Daesh that this problem would remain unresolved in Iraq or Syria,” Ayatollah Khamenei said in a meeting with Slovenia’s President Borut Pahor in Tehran on Tuesday. Iranian President Hassan Rouhani was also present in the meeting.

“Based on the second standpoint, the Americans are keen on the settlement of the issue of Daesh but the mechanisms [used to achieve this goal] are not such that they would be able to carry out this task,” the Leader added.

Ayatollah Khamenei emphasized that the outcome in both scenarios is the same and “Iraq and Syria, in particular, are in a very difficult and bitter situation.”

The Leader stated that violent clashes in West Asia and the creation of terrorist groups such as Daesh have been the result of acts of interference and imposition of the will by certain powers, adding that all countries are duty-bound to make efforts to settle such conflicts.

“The Islamic Republic, despite the propaganda by the hegemonic current, is active and effective with [the purpose of achieving] such a goal, but does not interfere in the affairs of other countries,” Ayatollah Khamenei said.

The Leader pointed to painful events in the region and the role of certain powers in stirring instability and imposing war on nations and stated, “The Islamic Republic has always called on independent countries to play an active role in countering pressure on nations and has asked them not to remain silent and an observer.”

Ayatollah Khamenei further referred to the bombardment of Yemen and destruction of the country’s infrastructure by Saudi Arabia over the past 20 months as one of the existing “bitter events” in the region.

“Independent governments must counter such incidents because exerting pressure on a nation is in fact a pain and suffering for all humanity,” the Leader added.

The Leader also said that Iran and Slovenia enjoy great potentialities and capacities to bolster cooperation and expressed hope that the future would back up the Tuesday talks.

Ayatollah Khamenei reiterated Iran’s full commitment to its obligations under last year’s nuclear agreement, known as the Joint Comprehensive Plan of Action (JCPOA), signed between the Islamic Republic and the P5+1 group of countries and criticized the other side for its failure to fulfill its commitments under the deal.

The Slovenian president, for his part, said he had held very good talks with senior Iranian officials and expressed his country’s interest in deepening relations with Iran in all fields.

Heading a high-ranking politico-economic delegation, Pahor arrived in Tehran on Monday and was officially welcomed by his Iranian counterpart on Tuesday. The Iranian and Slovenian presidents held talks and attended a joint press conference earlier on Tuesday.