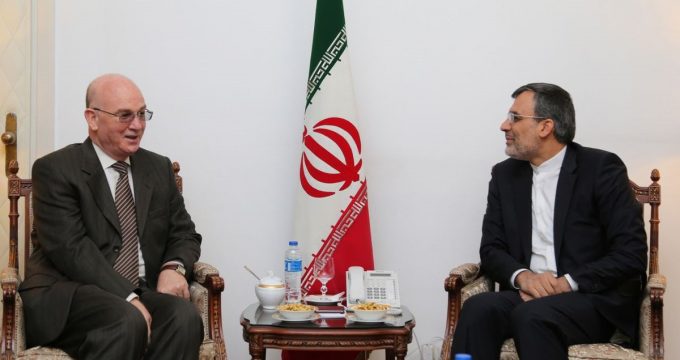 MNA– Deputy Foreign Minister Hossein Jaberi Ansari underlined that terrorism is an international problem and a common threat to the West Asia and Africa.

Jaberi Ansari made the remarks in a meeting with African Union (AU) Commissioner for Peace and Security Smail Chergui in Tehran on Monday who has has been invited by Jaberi Ansari to hold talks on boosting relations between Iran and the African Union, as well as on areas related to peace and security.

Iranian diplomat deplored some international and regional players seek exploiting regional issues for their own political purposes by dividing terrorists into good and bad.

Chergui, for his part, presented a report on the activities of African Union regarding the current crisis in the African continent and mechanisms to resolve the issues.

Likewise, he described plans and objectives of the African Union Peace and Security Commission, established in 2004, adding the Commission is responsible for offering effective and timely response to the conflicts and crises in Africa.

He pointed to the importance of the capacity and the position of the Islamic Republic of Iran, urging for cooperation in the areas of peace and security and finding a common approach in the fight against terrorism.

At the end of the meeting, a Memorandum of Understanding on cooperation in the fields of peace and security was signed between Iran and AU, according to which the Islamic Republic of Iran and the African Union would work together for capacity-building to hold peacekeeping operations.