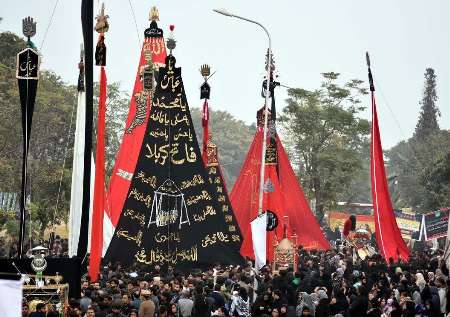 IRNA – Thousands of Pakistani Shia Muslims across the country observed Arbaeen procession on Monday with religious spirit, devotion and respect.

Mourning processions were held in different cities of the country to mark the day along with religious rituals held in Imambargahs (special religious centers for Shia community) across Pakistan.

The event marks the culmination of a 40-day mourning period after the 10th of Muharram, the martyrdom date of Imam Hussein (AS), the third Imam of Prophet Mohammad (PBUH) Infallible Household and his 72 companions in 680 A.D.

Hundreds of thousands of pilgrims from Pakistan also went to the holy city of Karbala, to mark Arbaeen.

Foolproof security arrangements were made to provide security to Arbaeen processions. Extra contingents of Rangers, police and police commandos were deployed along the routes of the processions and Imambargahs in different cities.

Pillion riding has also been banned besides the mobile phone service remained suspended at the routes of the processions in some cities.