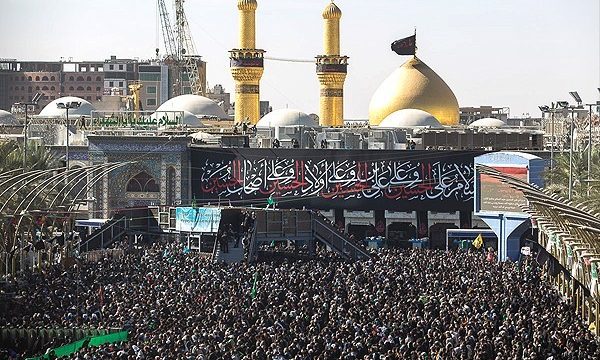 American Herald Tribune– The Iraqi city of Karbala, where the holy shrine of the third Shia Imam -Imam Hussein- is located, is swarming with millions of devoted Muslims, both Shias and Sunnis, for mourning rituals marking Arbaeen, known as the largest religious gathering in the world.

Given the mainstream media’s constant sensationalized reporting on terror and Muslims in the Western world, the utter lack of coverage of Arbaeen’s march on Sunday and Monday revealed the double standard that exists in reporting on peaceful Muslims.

Monday marked the final day of the mourning for Imam Hussein who was martyred in a battle with the massive army of Yazid after refusing allegiance to the tyrant caliph. Yazid the caliph of Umayyad dynasty was promoting the same type of Islam as ISIS and Wahhabist preach today.

Millions of marchers participated in the annual Arbaeen Procession in Karbala. The marchers are said to come from over 60 countries, and most of them have marched all the way to Karbala from other Iraqi cities like Najaf and Baghdad in a show of devotion. Each year, Sunni Muslims and followers of other religious groups such as Christians join the journey to mourn the martyrdom of Imam Hussein.

Arbaeen, or mourning, is a Shia Muslim tradition to mark the anniversary of seventh-century social justice leader Imam Husain. Arbaeen is commemorated 40 days after Ashura, the martyrdom anniversary of Imam Hussein (AS) and his companions in 680 AD. However, in light of ISIS terror attacks globally, several people took the controversial step of turning their march political in order to denounce terror in all forms.

Tens of thousands of Muslims have been killed and displaced by ISIS’s declared caliphate, an exponentially larger number than those killed in attacks in the West.

The occasion has found additional significance in recent years as it has become a rallying cry for the campaign against ISIS terrorists who have frequently targeted the pilgrims.

Iraqi troops have been deployed to ensure security for the pilgrims. The northern and western parts of Iraq have been plagued by gruesome violence ever since ISIS terrorists began a campaign of terror in the country in June 2014.

The terrorist campaign, however, has not dissuaded pilgrims from around the world from making the journey.

It is noteworthy to mention the mainstream media blackout of the millions people marched gathering in war torn Iraq, battling the ISIS, as a clear sign of biased reporting.