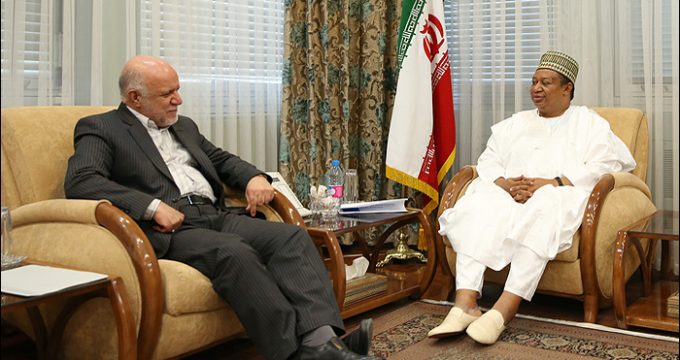 He made the remarks after a meeting with Iranian Minister of Petroleum Bijan Zangeneh.

Reaching consensus in Algiers was not possible without the constructive engagement and the leadership role that was played by the Islamic Republic of Iran represented in the meeting by the minister Zangeneh.

“I came here to meet with the Iranian petroleum minister just before attending the crucial meeting of OPEC members in Algiers and Minister Zangeneh assured me here that he would do and Iran would do everything possible to reach the consensus and to work for it,” the official added.

He noted that “Therefore I remain personally grateful to him for the flexibility he showed in Algiers and the accommodation and the leadership role he played to ensure we come out of Algiers with an agreement.”

“It is not a coincidence that I came back to Iran before the Vienna meeting, I came to exchange views with Mr Zangeneh and also to brief him with the lastest developments; to even respectfully ask him to show more flexibility in Vienna in November so that, we can implement the Algiers accord,” Barkindo said.

Zangeneh hosted a meeting with Barkindo on Saturday at his Tehran office.

Members of the Organization of the Petroleum Exporting Countries will meet on November 30 to discuss a proposed production freeze plan in Vienna. OPEC members agreed on the outline of a freeze plan on the sidelines of the International Energy Forum (IEF), which grouped producers and consumers, in Algeria on Sept. 26-28.

The freeze plan is expected to seek to revive a global deal to stabilize oil output levels.

Oil prices settled higher on Friday, closing out a strong week that saw crude buoyed by growing expectations that OPEC will find a way to cap production at the end of the month, Reuters reported.

Brent notched a daily rise of 37 cents, or 0.8 percent, to $46.86 per barrel. Brent also had its first weekly increase in five weeks.

Attempts by OPEC and non-OPEC oil exporters to reach a pact on freezing output earlier this year failed.