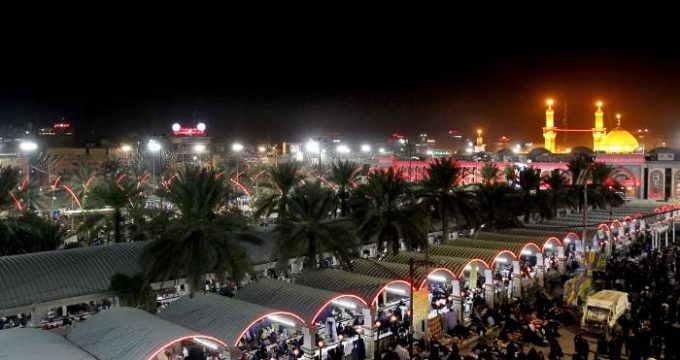 Press TV- Millions of Muslims from across the world are marching toward the Iraqi holy city of Karbala to perform the rituals of Arba’een, one of the most revered religious occasions on the Islamic calendar.

Arba’een marks 40 days since Ashura when Imam Hussein, the grandson of Prophet Muhammad, was martyred in the desert plains of Karbala along with his 72 companions 14 centuries ago.

Monday will mark the final day of the mourning for Imam Hussein who was martyred in a battle with the massive army of Yazid I after refusing allegiance to the tyrant caliph.

Each year, followers of other religious groups such as Christians and Sunni Muslims join the journey to mourn the martyrdom of Imam Hussein, the third Imam of Shia Muslims.

The occasion has found additional significance in recent years as it has become a rallying cry for the campaign against Takfiri terrorists who have frequently targeted the pilgrims.

For the past few days, hundreds of thousands from Iraq, Pakistan, India, Iran, Bahrain, Saudi Arabia, Lebanon, Azerbaijan, Turkey and elsewhere have been trekking a main road between Najaf – another holy city in Iraq – and Karbala on foot to show their devotion.

Some of them started their hiking across the border in Iran and other countries.

On Iran’s Mehran border with Iraq, a massive crowd is awaiting permit for entry after Iraqi authorities closed the crossing because they are overwhelmed.

According to officials, as many as two million Iranians are heading to Karbala which is expected to draw 20 million pilgrims by Sunday.

Iraqi troops have been deployed to ensure security for the pilgrims. The northern and western parts of Iraq have been plagued by gruesome violence ever since Daesh terrorists began a campaign of terror in the country in June 2014.

The terrorist campaign, however, has not dissuaded pilgrims from around the world from making the journey.