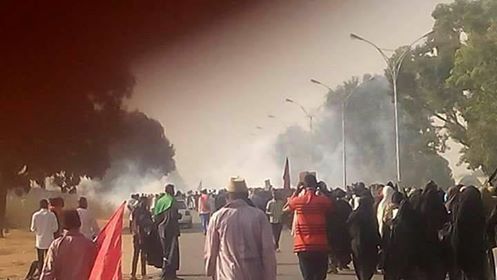 Press TV- The Islamic Movement in Nigeria (IMN) has held a funeral for Muslims recently killed by the country’s armed forces in the northern city of Kano during a march held to mark 40 days after martyrdom anniversary of the third Shia Imam.

Media reports said the IMN had laid to rest the bodies of the victims, including a two-year-old girl, on Wednesday, saying that Nigerian police have taken away dozens of dead bodies after they were brought to a hospital morgue.

Nearly 100 IMN supporters were killed on Monday, after Nigerian forces fired live rounds and tear gas at mourners during a peaceful march held ahead of the upcoming Arba’een mourning rituals, which mark 40 days after the martyrdom anniversary of Imam Hussein (PBUH), the third Shia Imam and the grandson of the Prophet Muhammad (PBUH).

Fierce clashes broke out when police tried to disperse thousands of people, including women and children, who were marching from Kano to Kaduna for the mourning rituals.

Supporters of the Islamic Movement in Nigeria have been subjected to heavy-handed crackdown since last year, when the army attacked a religious ceremony in their stronghold city of Zaria in the north.

In December 2015, Nigerian forces raided the house of the IMN’s leader, Sheikh Zakzaky, and arrested him after killing those trying to protect him, including one of the movement’s senior leaders and its spokesman.

The Sheikh himself was shot seven times during the attacks and blinded in one eye. He still remains in custody of the army.

The raid occurred a day after Nigerian soldiers attacked a group of Muslims attending a ceremony at a religious center in Zaria, accusing them of blocking the convoy of the army’s chief of staff and attempting to assassinate him.

The Nigerian army killed 348 Muslims during the attack on the religious ceremony, according to a report by the Islamic Human Rights Commission, a non-profit organization based in London.