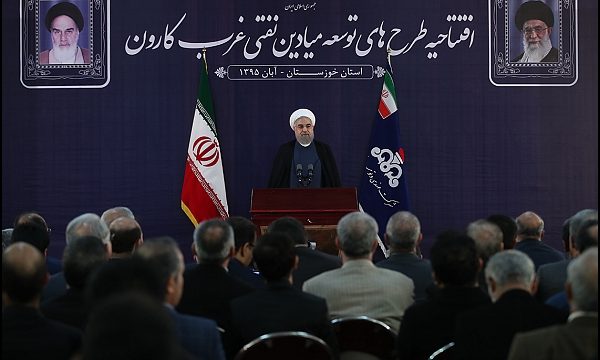 Tasnim – Iranian President Hassan Rouhani praised the success of the country’s oil industry to rapidly improve its conditions in the post-sanctions era in terms of output and exports.

Speaking Sunday at a ceremony to launch a number of development projects in the southwestern province of Khuzestan, the president highlighted the world’s amazement at the Iranian oil industry’s achievement in raising oil production and export levels back to the pre-sanctions levels in just a few months.

He added that the Oil Ministry made the most out of the atmosphere created by the coming into force of the Joint Comprehensive Plan of Action (JCPOA), a lasting nuclear deal between Tehran and world powers.

Iran and the Group 5+1 (Russia, China, the US, Britain, France and Germany) reached the agreement in July 2015.

It terminated all anti-Iran sanctions after coming into force in January this year.

Since then, Iran has managed to increase its oil production and in a short period of time raised its oil exports to levels that existed before sanctions were imposed on the country in 2011.

Iran’s exports of oil stood at 2.35 million bpd in 2011.  The sanctions restricted the country’s oil exports to around 1 million bpd among other economic bans – already described by analysts as the toughest the world has ever seen.