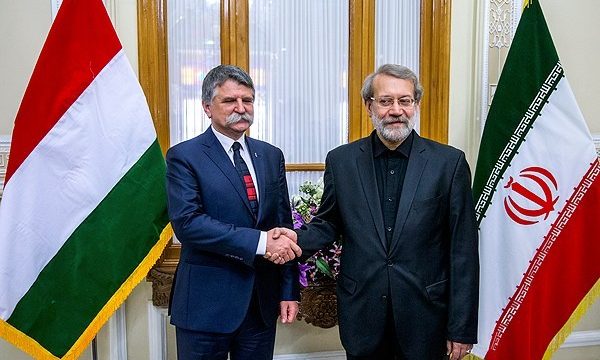 Iranian Parliament Speaker Ali Larijani made the remark in a joint press conference with the Speaker of the National Assembly of Hungary, László Kövér, on Saturday in Tehran.

He maintained that the friendly and historical ties between the two countries had brought about ample opportunities for negotiations during his meeting with the Hungarian official, which would hopefully lead to further expansion of economic relations.

According to Larijani, the two sides held good discussions on investment, buses, environment, water, as well as cultural and academic cooperation.

“Another part of our discussion was dedicated to regional issues and terrorist activities that have soared in the recent years,” Larijani said. “I am glad to announce that the two countries hold similar views on terrorism and regional developments.”

The Hungarian senior official, for his part, said he was honored to be the first Hungary’s Parliament Speaker to visit Iran, expressing hope for more visits on higher levels as well as at the level of commissions and friendship groups.

“On behalf of myself and Hungary’s parliament, I vow to support and follow up on every project for cooperation between the two countries that have been started last year,” he stressed.

He further noted the establishment of a sister-city relationship between the capital cities of Iran and Hungary in April 2015, saying he is scheduled to meet with Mayor of Tehran during his visit.