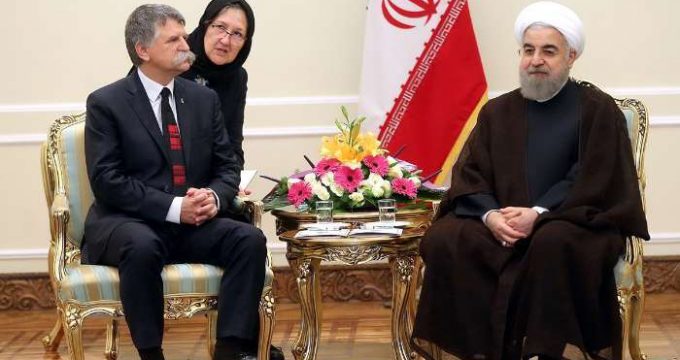 Iranian President Hassan Rouhani made the comment in a meeting with the Speaker of the National Assembly of Hungary, László Kövér on Saturday in Tehran, adding “the Islamic Republic of Iran is a great country with an emerging economy and has great potentials and capabilities in technical and engineering fields, as well as infrastructural projects.”

The President also lauded the EU’s positive role in the course of nuclear negotiations, adding “the private sectors of both countries should be informed of each other’s potentials to take the role of pioneers in bolstering cooperation.”

Rouhani then referred to contracts between Iran and many countries across the world, including European countries in the post-JCPOA era, adding “most of these contracts have been put into action and Hungarian investors and companies can now tap into the opportunity to further develop ties with Iran.”

The President went on highlight the need for expediting the implementation of agreements made between the two countries during the visit by the Prime Minister of Hungary to Tehran, adding “Tehran holds promoting its scientific and cultural ties with Budapest in high regard, on the same level of political and economic relations.”

He also referred to Iran’s progress in the field of modern technologies, particularly in nano- and biotechnology, calling for closer cooperation between Tehran and in various sectors of peaceful nuclear energy.

He also invited Hungarian people to take a closer interest in Iran’s historical sites and other fascinating tourist attractions.

Rouhani further touched upon the issue of combating terrorism, adding “terrorism is a great threat to the region and the world and no country can remain immune to its adverse effects.”

“People in Iraq, Syria, Yemen and Libya are under severe conditions,” said Rouhani, “it is our humane and international responsibility to send humanitarian aid such as medicine and food to the people of these countries and help them recover as fast as possible.”

For his part, the Speaker of the National Assembly of Hungary, László Kövér, said Budapest is determined to develop ties with Tehran in all fields of mutual interest.

“Hungary is completely ready to develop ties with Tehran, especially in economic fields and this will definitely benefit both nations and governments,” he stressed.