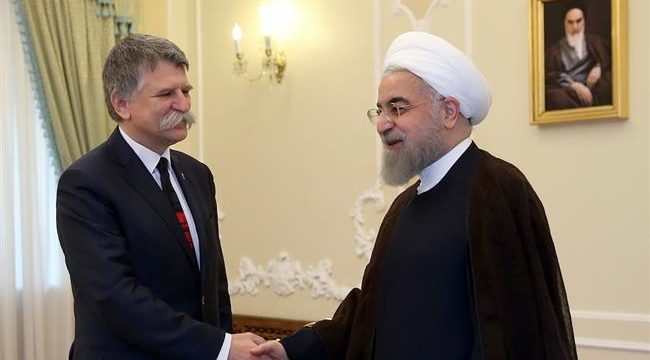 He made the remark in a meeting with Speaker of Hungary’s National Assembly László Kövér in Tehran on Monday.

President Rouhani said his government had based its foreign policy on expanding relations with friendly countries.

While hailing the Islamic Republic’s advancements in the area of new technologies, especially nanotechnology and biotechnology, Rouhani said, “The countries (Iran and Hungary) can cooperate with one another in various areas concerning the peaceful application of nuclear energy.”

“Iran is a vast country with a newly-emergent economy. Its expansive capacities and capabilities in the area of technical and engineering services, the implementation of infrastructural projects, and also Hungary’s competencies in the field of industry and agriculture has created proper bases for the expansion of Tehran-Budapest ties,” he said.

The Iranian president also insisted on the transfer of humanitarian food and medical aid to nations afflicted by terrorism as an international obligation, while Kövér said Budapest was prepared to cooperate with Tehran in the fight against terrorism.

Rouhani also laid emphasis on the expedient implementation of the eight documents and memoranda of understanding that were signed when Hungarian Prime Minister Victor Orbán visited Iran last November.

According to the documents, Tehran and Budapest will boost their political consultations and promote their cooperation in the fields of economy, investment, tourism as well as cultural, scientific and educational exchanges. The two sides will also cooperate on health, medicine and communications technology.

For his part, the Hungarian speaker communicated Budapest’s determination to boost bilateral ties with Iran and said, “The current level of relations is not on par with the countries’ capabilities.”

Separately, the Hungarian official met with his Iranian counterpart Ali Larijani, who later said the meeting had featured important negotiations on the development of mutual economic ties and the fight on terrorism.

The economic discussions, Larijani pointed out, concerned the areas of energy, bus manufacturing, environment, and water.

The countries view of the “ugly” phenomenon of terrorism, he added, had much in common.