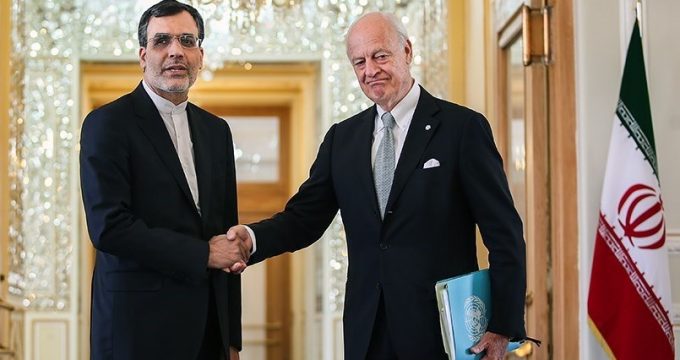 IRNA– Deputy Foreign Minister for Arab-African Affairs Hossein Jaberi Ansari said on Saturday that in order to put an end to the ongoing crisis in Syria, political efforts as well as efforts on the ground and sending humanitarian aid to the crisis-hit nation are needed.

Jaberi Ansari made the remarks during a meeting in Tehran with UN Special Envoy for Syria Staffan de Mistura.

Iran never made planning based on who would win the US elections and regarded the issue as internal issue of the US people, the deputy foreign minister said.

He said that in order to find a lasting settlement to the grave humanitarian conditions in Aleppo, efforts seeking to disintegrate Syria and taking hostage of hundreds of thousands of Syrian citizens have to be set aside.

The UN special envoy, for his part, called for further consultations with Iran as a main player and key partner in designing plans out of the ongoing crisis in Syria.

De Mistura said that the grave situation in Aleppo requires efforts by all the parties involved to facilitate finding a solution to the crisis.