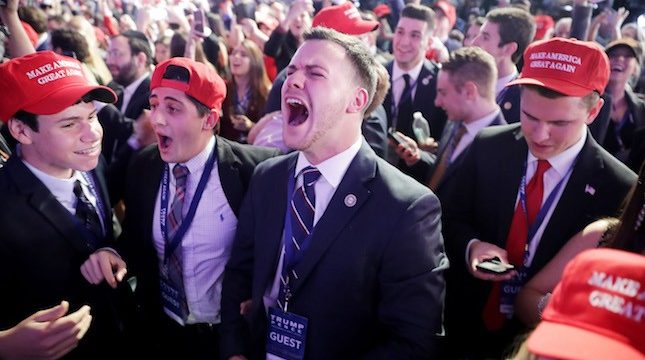 Washington Times| Guy Taylor: Global financial markets plunged in shock during the initials hours after President-elect Donald Trump’s victory but they were climbing back by Wednesday morning, as cautious reactions and congratulatory statements began pouring in from some world leaders.

In China, where Mr. Trump was seen as more popular than Hillary Clinton heading into the vote, President Xi Jinping expressed hope that relations between Washington and Beijing will grow rather than be damaged by Tuesday night’s result.

“I am looking forward to working together with you to expand China-U.S. cooperation in every field,” Mr. Xi said in a statement to Mr. Trump, according to the official Xinhua news service.

The Chinese president said he hopes “differences” between Washington and Beijing can be “controlled in a constructive manner, so as to push China-U.S. relations further forward.”

Iranian Foreign Minister Mohammad Javad Zarif was slightly more blunt, saying earlier Wednesday that Mr. Trump’s will be under pressure to comply with the nuclear deal the Obama administration and other powers inked with Iran last year.

Mr. Trump had, during the campaign, lambasted the deal that reduced Iranian nuclear stockpiles in exchange for international sanctions relief. On repeated occasion, he called it a “horrible contract.”

But his campaign stopped short of saying a President Trump would try to repeal the agreement. Trump adviser Walid Phares told The Daily Caller News Foundation in July that Mr. Trump was “not going to get rid of an agreement that has the institutional signature of the United States.”

Mr. Zarif said Wednesday that the “U.S. should implement what it has taken up as a multilateral international undertaking under the nuclear deal,” according to Fars news agency.

Global investors, meanwhile, were initially stunned by the Trump victory. Worried a Trump win might cause economic and global uncertainty, investors were in full flight from risky assets on Tuesday night and early Wednesday, according to Reuters.

But the U.S. dollar and world stocks began to steady in the European morning on Wednesday, having been hammered overnight, the news agency said.

CNBC reported that major U.S. defense companies such as Lockheed Martin and Raytheon would likely be early beneficiaries of a Trump win, with both trading on the upside Wednesday morning.