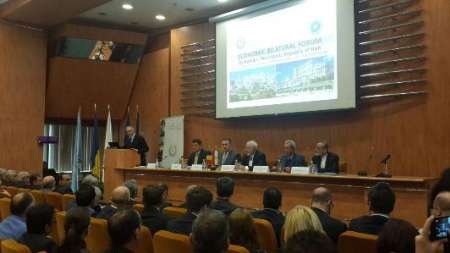 Speaking in the Iran-Romania Economic Forum, the foreign minister said Iran has been located in an insecure area but has sustainable security because of support given by its people.

Iran and Romania have good potentials for cooperation and are committed to boost bilateral ties, he added.

The top Iranian diplomat said Iran can help Romania to access the Persian Gulf, the Sea of Oman and the Indian Ocean transit routes.

He voiced hope for improvement of cooperation between Tehran and Bucharest with the help of two countries’ entrepreneurs.

Zarif arrived in the Romanian capital late on November 8 on the first leg of his three-nation tour to the Eastern Europe.

Zarif is scheduled to meet Romanian Prime Minister Dacian Cioloș and the President of the Chamber of Deputies Florin Iordache.

He is also to attend a trade meeting and a conference on the fight against terrorism and extremism.

The Iranian foreign minister would also travel to Slovakia and the Czech Republic on the second and third legs of his tour to Eastern Europe.