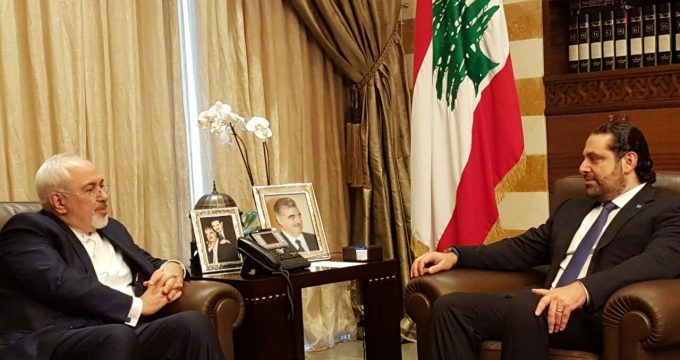 MNA– Iranian FM Zarif who is visiting Lebanon, on Tuesday, met with Saad Hariri who has been appointed by newly-elected President Aoun of Lebanon to form the new cabinet of the Arab country.Regional and Lebanese developments, Iran-Lebanon cooperation in the new era of President Michel Aoun, and the formation of the new Lebanese cabinet were the areas conferred on by Iranian Foreign Minister, Mohammad Javad Zarif, and Lebanese to-be-Prime Minister, Saad Hariri, in a bilateral meeting.

The two officials met on Tuesday at Beit al-Wasat — the famed mansion of Saad Hariri — having Iranian Ambassador to Beirut, Mohammad Fathali, in the meeting.

Iranian Foreign Minister, Mohammad Javad Zarif, who has arrived in Beirut late on Monday, is the first international official meeting and discussing with newly-elected President Aoun of Lebanon. Zarif is heading a senior political and economic delegation to Beirut at the third official visit of his tenure as the Foreign Minister of the Islamic Republic of Iran.

Zarif is slated to leave Beirut for Eastern European countries later on Tuesday.