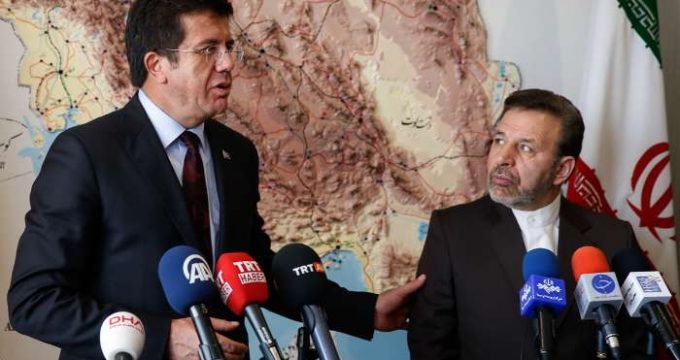 Hurriyet Daily News– Turkey aims to increase the number of goods entailed in its preferential trade agreement with Iran to 200 in 2016, as it looks to significantly boost bilateral trade ties, Economy Minister Nihat Zeybekci said during a visit to Iran on Nov. 5.

Speaking at a press conference after bilateral meetings followed by an inter-delegation session with Iranian Communications Minister Mahmoud Vaezi, Zeybekci said the trade volume between the two countries got a boost during the first nine months of this year.

“We are planning to increase the number of goods entailed by the preferential trade agreement to 200 this year. We will sign an agreement [to this effect] by 2017,” Zeybekci said.

The $30 billion trade volume goal between Turkey and Iran could be reached soon, he said.

“We are here as presidents of the Joint Economic Commission. It is quite significant that we will conduct the first preferential trade agreement — which will be applied in 13 countries – in Tehran,” he added.

Vaezi, for his part, said both sides discussed trade, investments, customs, banking, shipping and tourism.
“A great effort must be made to reach the target of $30 billion trade volume,” Vaezi added.

Speaking at a press conference after meeting Iranian Minister of Industries, Mines and Trade Reza Nematzadeh, Zeybekci said preparations were being made for the use of respective countries’ national currencies for trade purposes between the two sides’ central banks.

“The Iranian banks need to be able to bank freely in Turkey. The related arrangements have been made and the mutual agreements have been signed. We want Turkish banks to be in Iran,” he said.

While Turkey’s Halkbank was already in Tehran, Zeybekci said they also wanted Ziraat Bank to be there.
Nematzadeh hoped for an improvement in the banking sector between Turkey and Iran.

“We expected that when sanctions [on Iran] are lifted, our banking relations would return to normal levels, but this has still not happened,” he said.