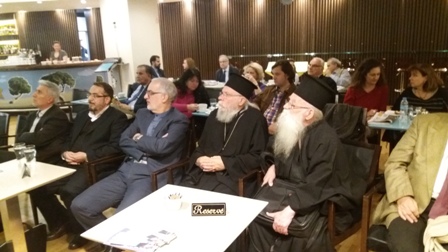 Religious freedom in Iran, a unique model for the world: Greek thinkers

November 7, The Iran Project – While attending a symposium on ‘the necessity of peaceful cooperation and solidarity of Muslims and Christians’, Greek scholars stressed the need for peaceful coexistence among religions and called Iran a model for other countries.

It is also emphasized in Iran’s constitution, all Iranian citizens and nationals are equal regardless of their ethnic, racial, linguistic and even religious affiliation, Motallebi Shabestari added.

While terrorist groups supported by a number of leaders of Sunni states and the West have attacked Christians churches and slaughtered those who disagree with them, Iran is trying to create peace in the region and prevent fanaticism and extremism, a Greek priest noted.

Iran cultural attaché in Athens Ali-Mohammad Helmi also urged religion scholars to make the world public opinion aware of the facts of all monotheistic religions divine teachings and prevent the growth of terrorist groups and extremists for the followers of religions to live peacefully.

Iran cultural attaché in Athens held a Symposium titled ‘the necessity of peaceful cooperation and solidarity of Muslims and Christians, Iran, cradle of peaceful coexistence of religions’  in the Greece capital on Sunday.