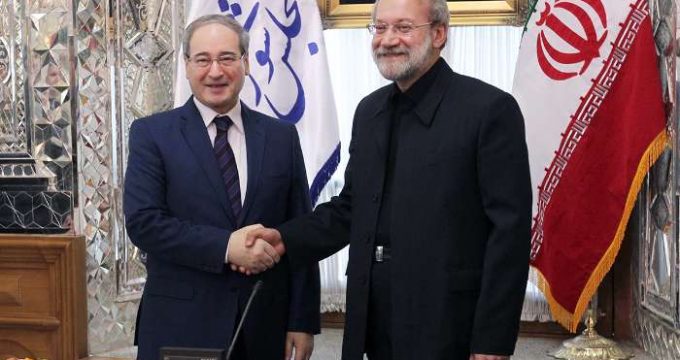 Larijani: Syria ‘on the front-lines’ of resistance

Mr. Ali Larijani met Mekdad on Monday to discuss the latest developments of Syrian crisis; “Iran and Syria enjoy excellent ties which have been historical as well as enduring; both countries should improve parliamentary ties along with trade and economic relations, and Syria constitutes a strategic depth for Iran’s foreign policy,” he told the meeting.

“Syria has been in the forefront of resistance against Takfirism and terrorism in saving the country’s territorial integrity; President Assad has been leading the country in a highly principled and accurate policy in handling the crisis.”

Larijani reiterated Iran’s policy to support Syrian government and fighting terrorism, against a front of hostile parties and countries along with the US and its allies; “against this background of hopelessness, further loss of life and damage should be prevented through a wise policy and a unity of Islamic countries in disavowal of the hegemonic powers and embracing the spirit of solidarity,” Larijani said.