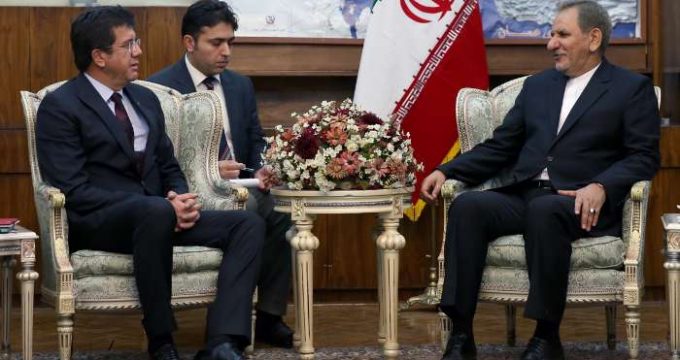 Iran calls on Turkey to distance itself from Saudi stances

MNA – Iran’s First VP Es’hagh Jahangiri said Iran wants Turkey not to take the same position towards Baghdad and Tehran as Riyadh has; “we have always distinguished between policies of Ankara and Riyadh.”

He made the remarks on Saturday while meeting with visiting Turkish Minister of Economy Nihat Zeybekci.

Friendly and brotherly relations has always existed between the two countries, Jahangiri said adding that Iran was satisfied with the failure of attempted coup in Turkey.

Iranian nation and government from the first moments of the coup announced their solidarity with Turkish legitimate government arising from the votes of the people of Turkey, Jahangiri said adding “in such events true friends and enemies are determined.”

Islamic Republic of Iran and the Republic of Turkey may disagree on some regional issues, he underlined, however the controversy will never let Iran leave Turkey alone against regional threats and destabilizing factors.

Pointing to the growing trend in trade relations between Tehran and Ankara, Jahangiri stated that the level of cooperation between the two countries needs serious attention and development.

Turkish Minister of Economy Nihat Zeybekci, for his part, said his country attached great importance to economic relations with Iran. He stressed the need for implementation of the agreement on preferential trade between Tehran and Ankara. The agreement on preferential trade between the two countries which was signed on January 5, 2015, entailed discounts on customs tariffs on 125 items.

Zeybekci said the agreement served to encourage more diversity in trade and exchanges in economic and trade relations between the two countries. He emphasized that many Turkish entrepreneurs were interested in doing business and making investment in Iran.

The Turkish minister is visiting Iran on the official invitation of the Iranian Minister of Industries, Mines and Trade Mohammad Reza Nematzadeh.