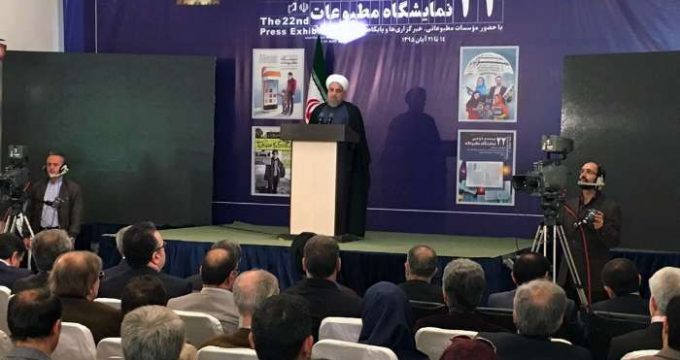 Rouhani: Media should contribute to ‘peace of minds’

MNA – Iran’s Hassan Rouhani has inaugurated the 22nd edition of Press and News Agencies Exhibition with the participation of over 700 news media on Saturday.

The media exhibition is the most important event to host digital and print media in Iran, where Mr. Rouhani has inaugurated 3 edition so far. President Rouhani touched upon critical issues of the press and the crackdown targeting the ‘mouths and pens’ based on unfounded evidence; he believed that the media’s foremost responsibility was to promote peace of mind for the public, since “in a society of severe perturbation and tumult, terrorism and extremism would find favorable grounds to be fostered; with the situation volatile and no longer predictable in the region, the media are gems of the society in instilling a peace of mind and equanimity in the public mentality to ultimately prevent outbursts of the public sentiments,” he told the inauguration ceremony earlier today. “If terrorism found grounds to develop, no foreign policy would address and solve influx of fighters to Syria and Iraq. Media are crucial in promoting awareness.”

Rouhani criticized the current state of the insecurity of the media terrain and the fact that the media industry had been felt precarious to remain active by the majority of people who would not rely on journalism as a way of living; “a broken pen and a silenced mouth would achieve paltry in terms of contribution to the overall public good. The political establishment should eschew from targeting the media based on unfounded evidence; let freedom flourish in this society,” he appeared in an innuendo to direct criticism to the status quo of the journalism.

“Why not to let the media decide on their own affairs? A professional union of journalists should be established to hear the cases and to settle differences, and not in all cases and conflicts with the Establishment, would the judge and the court intervene through giving verdicts; this way, media would attend to their inherent duties of enlightenment of the public and provide a mirror for magistrates in helping them to rule justly,” he emphasized.

President Rouhani believed that missiles, air fighters, and armored vehicles would provide maximum security for the country; this is a thing, he said, “I reached at 35 years ago; a strong diplomacy would achieve important feats only if a strong army supports it at home; people in a developed society would defy the propaganda of terrorists and thus avoid the evil creature wisely,” he added.

He rejected the mindset which had been supported crackdown on the cyber space; “the mentality is totalitarian as it ignores the constitution that recognizes the nation as the major player and the sole deciders of the system’s functioning; the legitimacy of the system directly came from the plebiscite, Mr. Rouhani emphasized, “no single body would decide to completely erase the cyberspace out of existence,” was the critique president levelled the specific circles.

On the recent Parliament voting of his nominations, Mr. Rouhani was rather upbeat about the developments and believed that Parliament had contributed to a public euphoria and instilled hope in the hearts of the lovers of the country; “the vote of confidence clearly indicated that the Parliament would not notice unfounded defamations and would stand with the government in the remaining months of the cabinet,” he added.

Rouhani also said that the media should clearly explain to the public the nuclear deal (JCPOA) and downplayed the criticism by the Principlists of the deal; “from among hundreds of sanctions, only 2 or 3 cases still persist; now the world sees Iran in a different light; the achievement was for all and was only possible through a cooperation and solidarity of different bodies within the government; the critics had erred in their criticism, since the nation is the major winner of the deal and the government only served the national will,” he told the ceremony.

He concluded with a criticism of what he believed was a cronyism and rentier behavior where specific media receive sensitive information of court processions; “the situation is weird, since some media and newspapers receive information otherwise classified for any other media deemed ‘not belonging to the inner circles’ of the judiciary; the public would defy such newspapers as such and will reject the behavior,” he said.