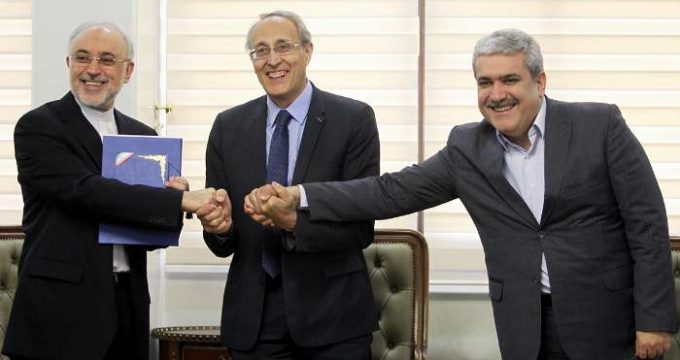 MNA– Director-General of ITER International Fusion Energy Organization voiced his full support for Iran’s joining of the nuclear fusion megaproject, saying the partnership will yield win-win results for both sides.Bernard Bigot made the remarks on Saturday in Tehran, on the sidelines of signing the first memorandum of understanding between ITER and Iran.

While noting that the ITER project is one of the biggest and newest projects in the field of nuclear fusion, he said “Iran as an important and advanced country can have a significant collaboration in the megaproject.”

Bigot also referred to the Paris Agreement to combat climate change that entered into force on Friday, adding “the agreement will help tremendously with improving the current state of the environment.”

He went on to add, “presently, 80 per cent of the world’s energy resources are supplied by fossil fuels which are about to run out. That is why the ITER project is of such a critical importance.”

He deemed the three major benefits of the ITER project as ‘high safety of reactors’, ‘unlimited access to natural resources’, and ‘environmental safety’; “considering these benefits, Iran’s participation in the project is significant and the use of this technology will be in the interests of all countries,” he said.

“In the ITER project, we will be able to use the experience, capacities and human resources of Iran, and on the other hand, give Iran the opportunity to access new technologies and improve its domestic capacities in the areas of science and technology,” he said.

“Within the next few months I will be able to say in what areas we can have closer cooperation with Iran, and I will present my findings to the other seven members of the project,” he added.

The first MoU on confidentiality of information was also signed between the two sides.